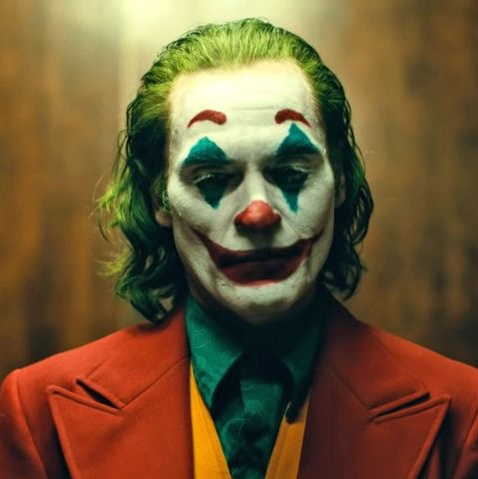 £1.74£4.9965%Chili Deals
Deal editor185
Get dealGet deal
Deal editor
185Get dealGet deal
Refreshed 9th Mar (Posted 11th Feb)
If you fancied watching Joker, then possible to rent this for £1.74 SD or £2.24 HD at Chili. To get this price you need to setup a new account (takes 2 minutes) and then select film and 50% off your first film rental will be automatically applied at checkout. The 50% discount also works on other film rentals in case you wanted to watch a different film. 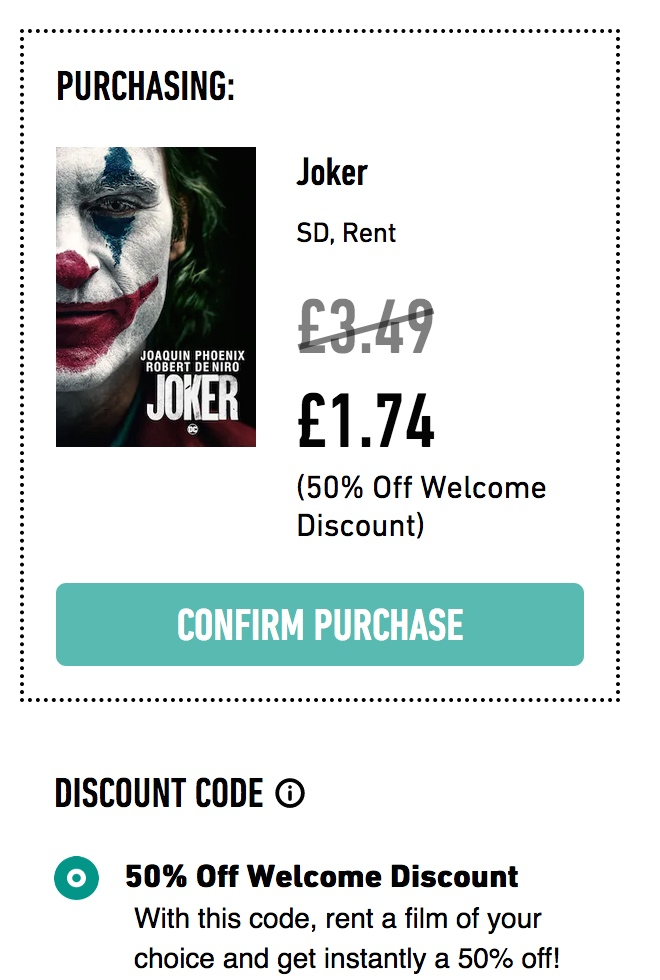 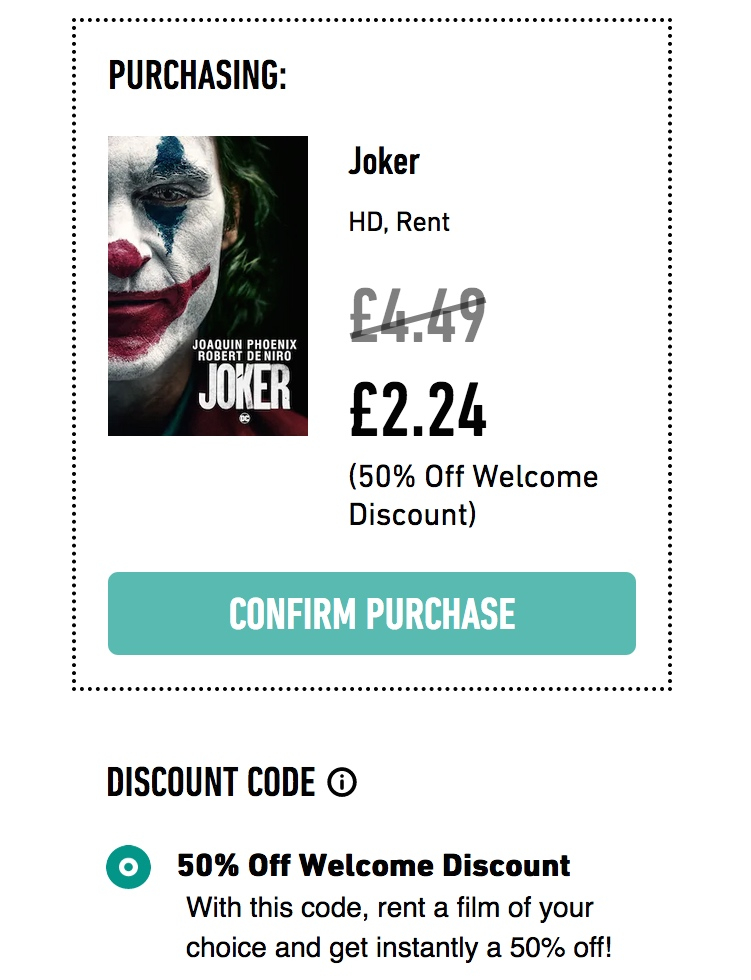 Winner of the Golden Lion for Best Film at Venice Film Festival and starring Golden Globe winner Joaquin Phoenix and widely nominated in the upcoming Oscar awards, a thrilling and exceptionally brilliant film by Todd Phillips that is already considered the best movie of the year.

“Joker” centers around the iconic arch nemesis and is an original, standalone story not seen before on the big screen. Phillips’ exploration of Arthur Fleck (Phoenix), a man disregarded by society, is not only a gritty character study, but also a broader cautionary tale.

PostTweetShare Share with WhatsApp Share with Messenger
Community Updates
Chili DealsChili Discount Codes
New Comment Subscribe Save for later
Top comments
11th Feb
Thanks this deal is no joke
11th Feb
You could just watch Taxi Driver again.
11th Feb
Insane price this for an amazing movie - congrats also to Joaquin, who knows maybe he is checking HUKD to find out what to do with his winner cheque money
Edited by: "matwalaboy" 11th Feb
12th Feb

Where you expecting a kids film like all the marvel films?
185 Comments
11th Feb
Thanks this deal is no joke
11th Feb
Insane price this for an amazing movie - congrats also to Joaquin, who knows maybe he is checking HUKD to find out what to do with his winner cheque money
Edited by: "matwalaboy" 11th Feb
11th Feb
You could just watch Taxi Driver again.
11th Feb
Is the (new user) code "Joker" (v good film) specific ?
Those of "an age" may remember "Taxi Driver", being not dissimilar in many ways (8.3 IMDB)
imdb.com/tit…g_0
11th Feb

50% discount can be on any film rental as far as am aware.
11th Feb

Yup
Joaquim was good (very good) here again, just like RDN was back then.
Taxi Driver takes it for me as a whole, maybe cause of this one being linked with a fictional superhero and "Travis" was just well Travis with most of his distractions/disturbances (conditon ?) being "real" of the time.
And much as I liked it then (and still do), wasn't there any other tune but Rock n Roll ?
11th Feb
Thanks
11th Feb
Thanks! great film.
11th Feb

50% discount can be on any film rental as far as am aware.

Sounds like a "Deal" in itself ?
Thanks
Edited by: "H-otter" 11th Feb
11th Feb
Can you stream the movie from your phone to the TV with this site??
Had a look and seems you can't
11th Feb
Can you download or is it just streaming?
11th Feb

I suppose to the Americans it's just "The Yeah Song" they play it at hockey games every time the home team scores. At least he doesn't get a cheque.

Personally, I enjoyed Joker, but it's no Taxi Driver and I've read better Joker stories as a Batman fan. I thought Phoenix was better in 'You Were Never Really Here' too, but he was good in this and deserved the recognition.
11th Feb

Seems like you kinda answered your own question.
11th Feb

Yeah , a chrome cast works for me as mirror.
11th Feb
I was so excited about this movie when it was first announced yet still haven't watched it lol

My best movies of the last few months are knives out, uncut gem, Parasite. Recently also watched The Snowpiercer and Jexi which was hilarious
11th Feb

You learn something every day,
I enjoyed Joker massively, not leastly how it linked with the underlying story (clever).
Only recall seeing 2 x JP movies before in both of which he was exceptional (for me) in both Gladiator & Johnny Cash (Story ?)
I tried "Her" a couple of times but the film didn't keep my attention too long then.
Sister Brothers was Ok (by me) too.
11th Feb
Cracking film!! Bargain!
11th Feb
Better than Amazon Prime rip off price of £12.99
11th Feb

Walk The Line. Excellent movie
11th Feb
Shame you can't use the credit from the previous Chili offer to watch this movie!
Edited by: "Random_Purchase" 11th Feb
11th Feb
Worth. Every. Penny.
11th Feb

I manage to catch a bit of Snowpiercer last night, unfortunately forgot to skyq it, I'm hoping it'll be on catch up at some point...what I did catch looked very weird to say the least
11th Feb
Cheers chichi
12th Feb
Thanks Chanchi, that was a great film!
12th Feb
Shame the rental is limited to HD no 4K like the others offer.
12th Feb

Some great recommendations there!
12th Feb
Did not like this film at all.
12th Feb

What is a taxi? Is it like an Uber?

I didn't see what all the hype was about.

I blagged this as a freebie from sky and kind of regretted not selecting something else.

It was alright but I was expecting so much more from it.
12th Feb

Where you expecting a kids film like all the marvel films?
12th Feb
When is Parasite coming to VOD services ?

I love Taxi Driver, and I think the first hour of King Of Comedy is amazing, BUT I also think Joker, whilst offering strong nods to these movies is also a brilliant piece movie making... It's a fantastic "mood piece" with a brilliant main performance and music (if a bit lacking in the story)
Edited by: "DonkeyKonk" 12th Feb
12th Feb
Fantastic deal, but it doesn’t beat my modified Firestick where I can stream it in HD for free
12th Feb

When is Parasite coming to VOD services ?

it was just released cinemas this Friday. It'll be a few months. It's out on DVD in Korea though I think, pretty easy to find subtitled if you know where to look
Edited by: "Krooner" 12th Feb
12th Feb

Where you expecting a kids film like all the marvel films?

You can make the argument that a film that relies on you not having seen two seminal Martin Scorsese films is a "kids" film.
12th Feb

Where you expecting a kids film like all the marvel films?

No not all, DC tend to be darker movies than the Marvel franchise anyway.

It just doesn't live up to the hype for me.
12th Feb

What is a taxi? Is it like an Uber?

It’s something that gets you when your drunk . Only sober people use uber
12th Feb

I’ll wait for the Hollywood remake ! If I wanted to read subtitles I’d read the book