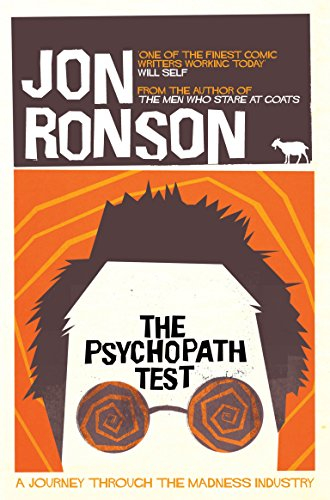 Great price for this classic book on Kindle.

What if society wasn't fundamentally rational, but was motivated by insanity? This thought sets Jon Ronson on an utterly compelling adventure into the world of madness.

Along the way, Jon meets psychopaths, those whose lives have been touched by madness and those whose job it is to diagnose it, including the influential psychologist who developed the Psychopath Test, from whom Jon learns the art of psychopath-spotting. A skill which seemingly reveals that madness could indeed be at the heart of everything . . .

Combining Jon Ronson's trademark humour, charm and investigative incision, The Psychopath Test is both entertaining and honest, unearthing dangerous truths and asking serious questions about how we define normality in a world where we are increasingly judged by our maddest edges.

'The belly laughs come thick and fast my God, he is funny... Ronson's new book is provocative and interesting, and you will, I guarantee, zip merrily through it' --Rachel Cooke, Observer

"Because of Ronson's relentless self-deprecation and goofy, British humor, it's easy to tag along without fully realizing the rigor of his reporting, which is itself frenzied with compulsive questioning and obsessive research." -- "The Boston Globe"

"A rollicking, page-turner of a book... no ordinary piece of investigative journalism... Ronson's storytelling skills are strong enough to enliven even the necessary reflections that would be one yawn after another if entrusted to a lesser writer." -- "San Francisco Chronicle"

."..A book that manages to be as cheerily kooky as it is well-researched." -- "Los Angeles Times"