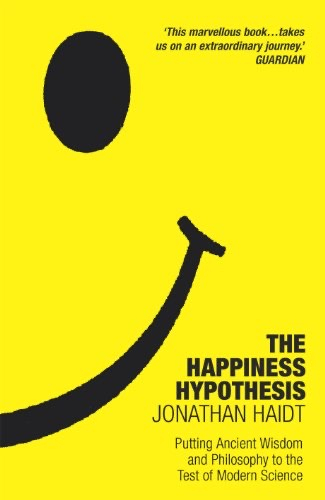 Every culture rests on a bedrock of folk wisdom handed down through generations.

The pronouncements of philosophers are homespun by our grandmothers, and find their way into our common sense: what doesn't kill you makes you stronger. Do unto others as you would have done unto you. Happiness comes from within.

But are these 'truths' really true? Today we all seem to prefer to cling to the notion that a little bit more money, love or success will make us truly happy. Are we wrong?

In The Happiness Hypothesis, psychologist Jonathan Haidt exposes traditional wisdom to the scrutiny of modern science, delivering startling insights. We learn that virtue is often not its own reward, why extroverts really are happier than introverts, and why conscious thought is not as important as we might like to think...

Drawing on the rich inspiration of both philosophy and science, The Happiness Hypothesis is a remarkable, original and provocative book - ancient wisdom in our time.

I really can't recommend this book enough. It's one of the best and most insightful books I've ever read . . . this book is just amazing for helping you recognize errors in thinking and personal biases that we all experience. It really gets to the roots of what makes people happy and unhappy rather than being some sort of a positive thinking, motivational book. Just outstanding stuff that you can really apply in day to day life.

Examining the ideas of thinkers like Plato, Buddha and Jesus in light of modern research . . . Haidt, a social psychologist, provides practical advice for parenting, romance, work and coping with the political and cultural divisions. ― Psychology Today

The Happiness Hypothesis is a wonderful and nuanced book that provides deep insight into the some of the most important questions in life - Why are we here? What kind of life should we lead? What paths lead to happiness? From the ancient philosophers to cutting edge scientists, Haidt weaves a tapestry of the best and the brightest. His highly original work on elevation and awe - two long-neglected emotions - adds a new weave to that tapestry. A truly inspiring book.

This is a delightful book . . . Haidt's writing embraces spiritual and mystical viewpoints while retaining scientific and rational coherence. ― Nature

This unusual book sets itself apart from the self-help category with its extensive scientific references, and intelligent, neutral prose, while the author's illuminating illustration of how the human mind works is both educational and refreshing. ― Sunday Times

You know what? Reading it did actually make this reviewer happier. ― Arena.

Jonathan Haidt is the Thomas Cooley Professor of Ethical Leadership at New York University's Stern School of Business. He received his Ph.D. in social psychology from the University of Pennsylvania in 1992 and then did post-doctoral research at the University of Chicago and in Orissa, India. He taught at the University of Virginia for 16 years before moving to NYU-Stern in 2011. He was named one of the 'top global thinkers' by Foreign Policy magazine, and one of the 'top world thinkers' by Prospect magazine. His research focuses on morality - its emotional foundations, cultural variations and developmental course.
PostTweetShare Share with WhatsApp Share with Messenger
Community Updates
2 Comments
Post a comment