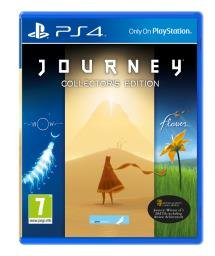 One of the most critically-acclaimed titles of the last generation, Journey™, is bringing its eclectic experience to the PlayStation®4 (PS4™) system in 2015. Originally developed by thatgamecomapany, the studio behind the award-winning PlayStation®Network titles flOw & Flower®, and remastered by Tricky Pixels for the PS4 system, players will have the opportunity to once again explore the exotic adventure in native 1080p resolution while targeting 60 frames per second.
Journey garnered over 100 Game of the Year Awards, including wins from Game Developers Choice Awards, DICE Awards and the BAFTA Games Awards. Additionally, the title took home notable awards solely for its Grammy-nominated musical score composed by Austin Wintory.

Awakening in an unknown world, the player walks, glides, and flies through a vast and awe-inspiring landscape, while discovering the history of an ancient, mysterious civilization along the way. Journey’s innovative approach to online play encourages players to explore this rich interactive environment with strangers who cross their path from time to time and delivers simple gameplay and accessible controls that invite players to explore and experience emotional chords that are still uncommon in video games. By traveling together, they can re-shape the experience – creating authentic moments they will remember and discuss with others.

• Intuitive controls and Experience. Players with differing skill levels and/or moods can experience the game at their own pace.

• Fresh online adventure. Players explore a mysterious world, discovering its hidden history. People are free to travel alone, or adventure with strangers that they meet along the way.
PostTweetShare Share with WhatsApp Share with Messenger
Community Updates
16 Comments
Post a comment