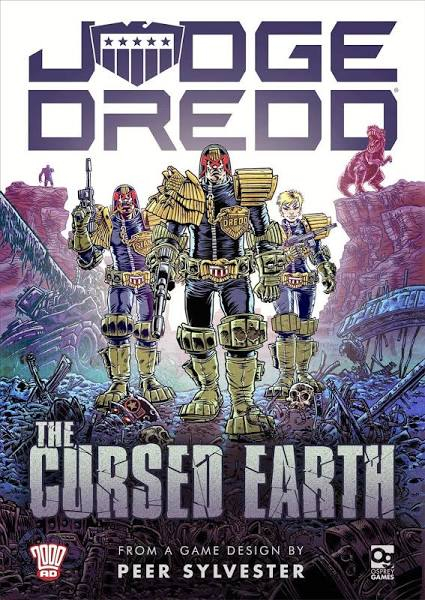 Featuring competitive, co-operative and solo player modes and brand-new, specially commissioned artwork, Judge Dredd: The Cursed Earthis an immersive sci-fi western in which players must lead a team of judges against dinosaurs, mutants, and the Cursed Earth itself in search of an object of immense power before it falls into the wrong hands. As they scour the wastelands, the team will encounter a host of iconic 2000AD characters that will push their resources and abilities to their limits. On an impossible journey through radioactive hell, can even the judges survive the Cursed Earth?

Not heard of this before but it's a reskin of The Lost Expedition which I've had my eye on for a while. Plus, you know - Judge Dredd.

BGG
PostTweetShare Share with WhatsApp Share with Messenger
Community Updates
New Comment SubscribeSave for later
8 Comments
25th May
Thanks
25th May
Been wanting to get The Lost Expedition for some time now, but for half the price this will do. Cheers! Just need to find the time to play it now...
25th May
Thanks, ordered.
25th May
like the theme, it's co-op and has good reviews. bonus for being able to be played solo - never played lost expedition but bought "hit Z road" a while back and that was a fun, cheap game that seems very similar. one more to add to my pile of shame !

this and lost expedition are both more than twice this price on amazon.
25th May
You know you were into Dredd as a teenager when you know the name of the artist who did the cover.
25th May
I've Lost Expedition and its expansion, but I'm still tempted to get this! It's a cracker price!
26th May
Great price; thanks OP! I'll def play this solo.
3rd Jun
Free delivery if you order 3 items.
They've got the Gaslands rulebook on sale too. Great game, a bit like X-wing but with more of a Mad Max theme, and instead of expensive models you just stick guns on hot wheels cars. People build and paint some amazing models for it ?