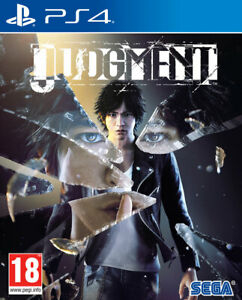 Use code PREP2020 at checkout. Decent price for a newly released game.

From the Makers of the Acclaimed Yakuza Series: Ryu Ga Gotoku Studios presents
Judgment, the dramatic tale of a disgraced lawyer seeking redemption in a world rife
with corruption and despair.

Investigate the Seedy Red Light District of Kamurocho: Step into the mind of private
detective Takayuki Yagami and utilize innovative investigation systems to uncover the
secrets that lie deep within Kamurocho’s corrupt underbelly.


Oddly there are very few copies on ebay too
6th Jan

Oddly there are very few copies on ebay too

Reckon it wasn’t a good seller?

I suspect it hasn't. Hard getting new franchises started especially when the audience is a niche. That said I really enjoyed it. I think it's stronger than the last few Yakuza games and blends the zaniness of that setting with a slightly more serious and definitely more coherent story. Worth every penny
6th Jan
£19.99 for digital if thats your thing / game sharing.

Just got it and started playing and its very good. A little less initimidating than Yakuza if new to these games.

The English dubs are very good also. Seems a good story for the little I have played.