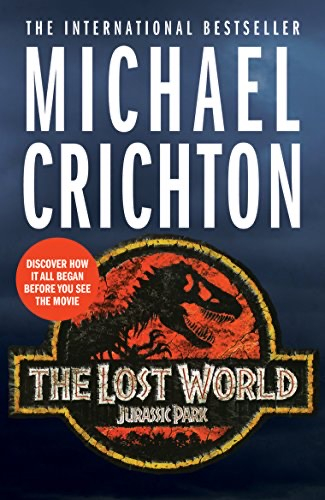 I tend to read the first almost every year as it is my favourite book but thought it was time to give the second one a read and found it at 99p.

THE BESTSELLING SEQUEL TO JURASSIC PARK

Six years have passed since the secret disaster at Jurassic Park. In the years since the extraordinary dream of science and imagination came to a crashing end, the island has been indefinitely closed to the public, its park dismantled, the dinosaurs themselves destroyed.

Or so it was thought.

But something has survived. And when a team led by maverick scientist Ian Malcolm enters the mysterious ‘Site B’ to investigate, they are determined that this, at last, will be the end of the dinosaurs...

Michael Crichton takes the terrifying events of Jurassic Park even further in this unstoppably readable adventure sequel, told by a master storyteller.
_____________________
A must-read for Jurassic Park fans: the Steven Spielberg adaption of The Lost World made numerous major plot changes to the original novel, making this the true last unexplored frontier of the Jurassic Park world...
PostTweetShare Share with WhatsApp Share with Messenger
Community Updates
Amazon DealsAmazon discount code
New Comment Subscribe Save for later
14 Comments
18th May
Book is so much better than the film!
18th May

Book is so much better than the film!

It really is. So much darker and so much more happens vs the film which ends being more close to a King Kong adaptation
18th May

Book is so much better than the film!

I do enjoy the film even though it’s incredibly silly, but I recall the book being really good and way better than the film which really is nothing like this book (even the ending of the second film is closer to the first book with the dinos on a boat it’s that different)
18th May

Actually I've just noted this is for the Jurassic World not Jurassic Park. Not read this and the reviews not as good on Amazon.
18th May

It’s a good book, not as good as the first but certainly an entertaining read.
18th May
Oddly you still can't buy the original Jurassic Park on Kindle anymore, on Amazon UK at least.
Edited by: "deckard2" 18th May
18th May

Weird I have Jurassic Park on Kindle, I bought it for 99p a few years ago. It used to be available so not sure why it isn't any more
18th May

lol its The Lost World, not Jurassic World and not sure what you mean its got a 4.6 out of 5 on Amazon UK across 1105 reviews and a 3.78 on the much harsher GoodReads (the original on GoodReads has a 4.03 overall).

For me Lost World is the more superior book, but it goes way more into the faux-science, ups the horror and mystery & is the only decent Jurassic Park sequel IMO
18th May
Is this the sequel to 'Billy and the Chloneosaurus'?
18th May

Is this the sequel to 'Billy and the Chloneosaurus'?

that a spin off to Tammy and the T-Rex?
19th May
Love this book, so different to the film it’s definitely worth a read just to see how it could have turned out
19th May
:cheers: to those think this book much better than movie
19th May
It's funny how the filmmakers tools different aspects of the two books and spread them out across the three movies. The river scene in JP3 was in Jurassic park, as was the aviary scene. Also the demise of the idiot with the cattle prod in TLW was lifted from the JP book where Hammond was killed in the same way by compys. The character of the lawyer, who is spineless in the film but a decent foil in the book is probably the biggest character change.