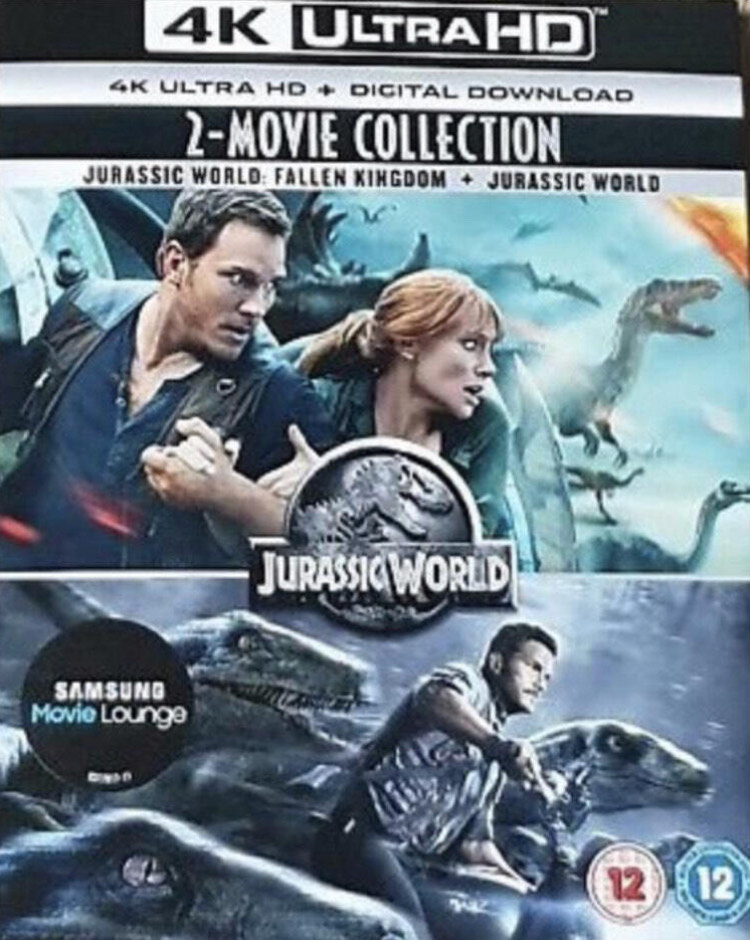 Please note, the pictures used in this ad are of an item I have opened. You will be receiving a factory sealed unopened item.

Please remember, these are 4K BLURAYs & not the normal HD BLURAYs so you will need a compatible 4K BLURAY player to watch these movies.

Three years after the destruction of the Jurassic World theme park, Owen Grady and Claire Dearing return to the island of Isla Nublar to save the remaining dinosaurs from a volcano that’s about to erupt. They soon encounter terrifying new breeds of gigantic dinosaurs, while uncovering a conspiracy that threatens the entire planet.

Located off the coast of Costa Rica, the Jurassic World luxury resort provides a habitat for an array of genetically engineered dinosaurs, including the vicious and intelligent Indominus rex. When the massive creature escapes, it sets off a chain reaction that causes the other dinos to run amok. Now, it’s up to a former military man and animal expert (Chris Pratt) to use his special skills to save two young brothers and the rest of the tourists from an all-out, prehistoric assault.
PostTweetShare Share with WhatsApp Share with Messenger
Community Updates
EBay DealsEBay discount code
If you click through or buy, retailers may pay hotukdeals some money, but this never affects which deals get posted. Find more info in our FAQs and About Us page.
New Comment Subscribe Save for later
Top comments
1st Dec 2019
Huge fan of the franchise but Fallen Kingdom is a film I'm not afraid to admit I fell asleep while watching. Average to poor film.

ebay.co.uk/sch…562
1st Dec 2019
Huge fan of the franchise but Fallen Kingdom is a film I'm not afraid to admit I fell asleep while watching. Average to poor film.

Jurassic World was good. I give it 7/10, and will happily watch again.
1st Dec 2019
Regardless what ppl think of the movies it's an insanely good price for two 4k films.

Wonder why this set seemed to drop value so quick, been £10 few times. Guess it's the bad reception of the second JW film?
1st Dec 2019
Are we allowed to list private ebay sellers rather than registered shops now? I'm confused.
1st Dec 2019
With products like this, is it just the film on the Disk which is in 4K or do you get the download/online version in 4K as well?
1st Dec 2019

I find it’s a bit hit and miss, some titles I have got 4k versions with standard blu Ray, if you can get an option for apple store which happens now and again you get a 4k dolby vision atmos version however there are not many devices you can use to play these on until he Apple TV+ app is available everywhere, if you get the google play option only which I think you will on both these films then your be lucky to get a 4k copy and if google updates the video to 4k you may still not get the 4k version.
1st Dec 2019

The seller needs to be registered as a business seller with at least 95% positive feedback from 1000 ratings!
1st Dec 2019

I was confused too - the sales 'blurb' is actually lifted straight from the Ebay seller's page, not just written in here.
2nd Dec 2019
Not even real 4K

Complete opposite for me. Jurassic World Was too bright and colourful. Second film was dark with horror elements. Bright back the fear of the dinosaurs
2nd Dec 2019
These 2 so called 'McMovies'' are a symptom of the sub-par slop being served up to the whales.
Edited by: "chaank" 2nd Dec 2019
2nd Dec 2019

No need to be! I find the combination of eBay money back and Paypal's buyer protection actually makes eBay one of the safest places to shop, about the only place I am more confident shopping is Amazon. Really the only way you could get conned on eBay these days is by doing something really silly like not paying with Paypal....
2nd Dec 2019
The last one was woeful but great deal
2nd Dec 2019
Good deal (even if it did change to £8.50 as I was checking out)

Good deal for anyone that got the first 3 for £21.25 off Amazon this weekend

Hes got Deepwater Horizon and Venom in 4K for £15 too, which is a bargain
5th Dec 2019
Can the seller prove ownership of these items or is this stolen crap?
7th Dec 2019
Two junk films on one disk bargain
7th Dec 2019
Someone’s been robbing ASDA.
7th Dec 2019
Wow! Amazing price. Pretty sure this is a Samsung Movie Lounge exclusive. I picked it up a while ago for a tenner.

Just to be aware, it does not include the BDs, just the UHDs. In case you are still HD and 'future-proofing' your collection.
7th Dec 2019
Good price but my case didn't come in the best quality. Actual blu ray was sealed though so definitely worth the price. Got this and Han Solo for £15 😁
7th Dec 2019
Two iconic moments in movie history, Chris Pratt was under 400 lbs.
7th Dec 2019

It's nearly 2020 I think by now most people know many movies are not native 4k and might be upscaled 2k. When we go over to 8k in the future people will still be posting links it's not real 8k.

The real question is do you take this with HDR/Dopby Vision and a higher resolution over blu ray and DVD? or do you go home with nothing?

There is no wait for a true 4k version especially at £7.50, heat added for the price even if one of the movies is sub par.
Edited by: "DookieWookie" 7th Dec 2019
7th Dec 2019
Since UV (ultraviolet) closed down, it’s unlikely that the download version will be accessible.
7th Dec 2019

Well, as the FX work was rendered in 2K there never will be a 'true' 4K version. Same can be said for almost any movie with digital FX rendered in 2K.

No, it must be in the whitelist that HUKD staff refuse to publish, unless the rules have changed.
Edited by: "Hearnia_2K" 8th Dec 2019