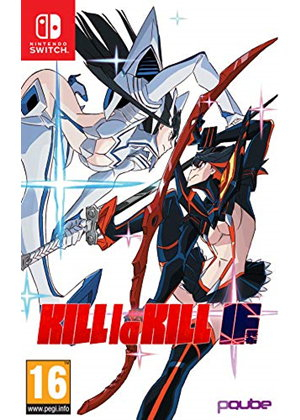 Pretty decent beat 'em up from the most excellent anime series of the same name.
Supervised under the original scenario writer Kazuki Nakashima comes a new untold KILL la KILL story of 'IF's! This is THE KILL la KILL battle action! Experience the hot-blooded action from the original anime series in this game! Use your favorite character, and pulverise all who stand in your way! Simple controls and extravagant actions!
PostTweetShare Share with WhatsApp Share with Messenger
Community Updates
Base.com DealsBase.com discount code
New Comment Subscribe Save for later
9 Comments
22nd Feb
That is a good spot @andywedge - heat added!
Edited by: "merb0786" 22nd Feb
22nd Feb
2% Topcashback!
Edited by: "BIGUSHEADUS" 22nd Feb
22nd Feb
Ordered!

Unsure if this game has ever been cheaper than this but looks like a deal to me, it hasn't on Steam AFAIK. So this will be a great alternative as I preordered a Switch.

And the resell value should remain the same if need be, £10 in CEX and £14 in Voucher.
Edited by: "epicinki" 22nd Feb
22nd Feb
Underrated game, worth it at this price, you get two extra characters via the updates.
Edited by: "adamstockley92" 22nd Feb
22nd Feb
£10.95 on PS4 as well. Grabbed a copy. Heated!
23rd Feb
Love the anime art style in kill la kill
1st Mar
Code in a box?
1st Mar

Code in a box?

Nope, it's a cartridge
4th Mar
Ordered the Switch version thanks.