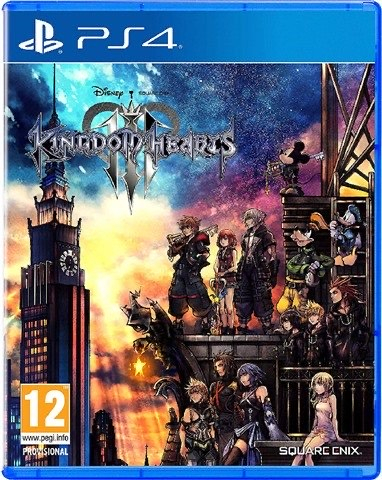 The prequels (the story so far) can also be picked up from Base.com for the same price so you can have the whole collection for under £30 on physical media:

KINGDOM HEARTS III tells the story of the power of friendship and light vs. darkness as Sora and his friends embark on a perilous adventure. Set in a vast array of Disney and Pixar worlds, KINGDOM HEARTS follows the journey of Sora, an unknowing heir to a spectacular power. Sora is joined by Donald Duck and Goofy to stop an evil force known as the Heartless from invading and overtaking the universe. Sora, Donald, and Goofy unite with iconic Disney-Pixar characters old and new to overcome tremendous challenges and persevere against the darkness threatening their worlds.
Adventure in Disney and Pixar Worlds
Embark on an adventure that spans the Disney universe: Travel across Disney and Pixar worlds to protect them from the Heartless invasion, and befriend and join heroes from Toy Story, Monsters Inc., Big Hero 6, Tangled, Hercules, and more!
Unlock the Power of the Keyblades
The mysterious and powerful Keyblades can now transform into additional forms with new abilities, moves, and animations. Equip multiple Keyblades and combo between them to unlock spectacular attacks!
Experience the Magic
Cast visually stunning, powerful magic spells to battle the Heartless. Call upon Disney-Pixar friends and partner with them for support. Turn the tide of combat by summoning all-new “”Attractions”” inspired by the theme parks.

Thrilling and Action-Packed Battles
Explore and interact directly with the Disney-Pixar worlds. Fight off swarms of Heartless while scaling massive cliffs, diving deep underwater, or even freefalling through the air. Experience unique gameplay elements custom designed for each new world!
Relive Classic Disney Shorts Through Minigames
Take a break from saving the world with over 20 minigames inspired by classic Disney short films
PostTweetShare Share with WhatsApp Share with Messenger
Community Updates
Base.com DealsBase.com discount code
If you click through or buy, retailers may pay hotukdeals some money, but this never affects which deals get posted. Find more info in our FAQs and About Us page.
New Comment Subscribe Save for later
5 Comments
21st Nov 2019
Bought this for my 11 year old who hasn't played any of the previous games. Will she be ok or is it worth buying the first 2?
21st Nov 2019
From comments on other threads, the story is quite convoluted so your not really missing out and can still enjoy the action / characters. I haven’t played them before either and intended on just buying the latest game to play with my Son, but then I saw the prequels were available cheap and bought them too! I’m still going to play III first though.
21st Nov 2019

Best picking up Kingdom Hearts - The Story So Far, which has all KH games upto, been knocking about online for about £15
21st Nov 2019

Playing KH 1 in 4k now. So many to play before I can finally get around to KH3 which I picked up recently