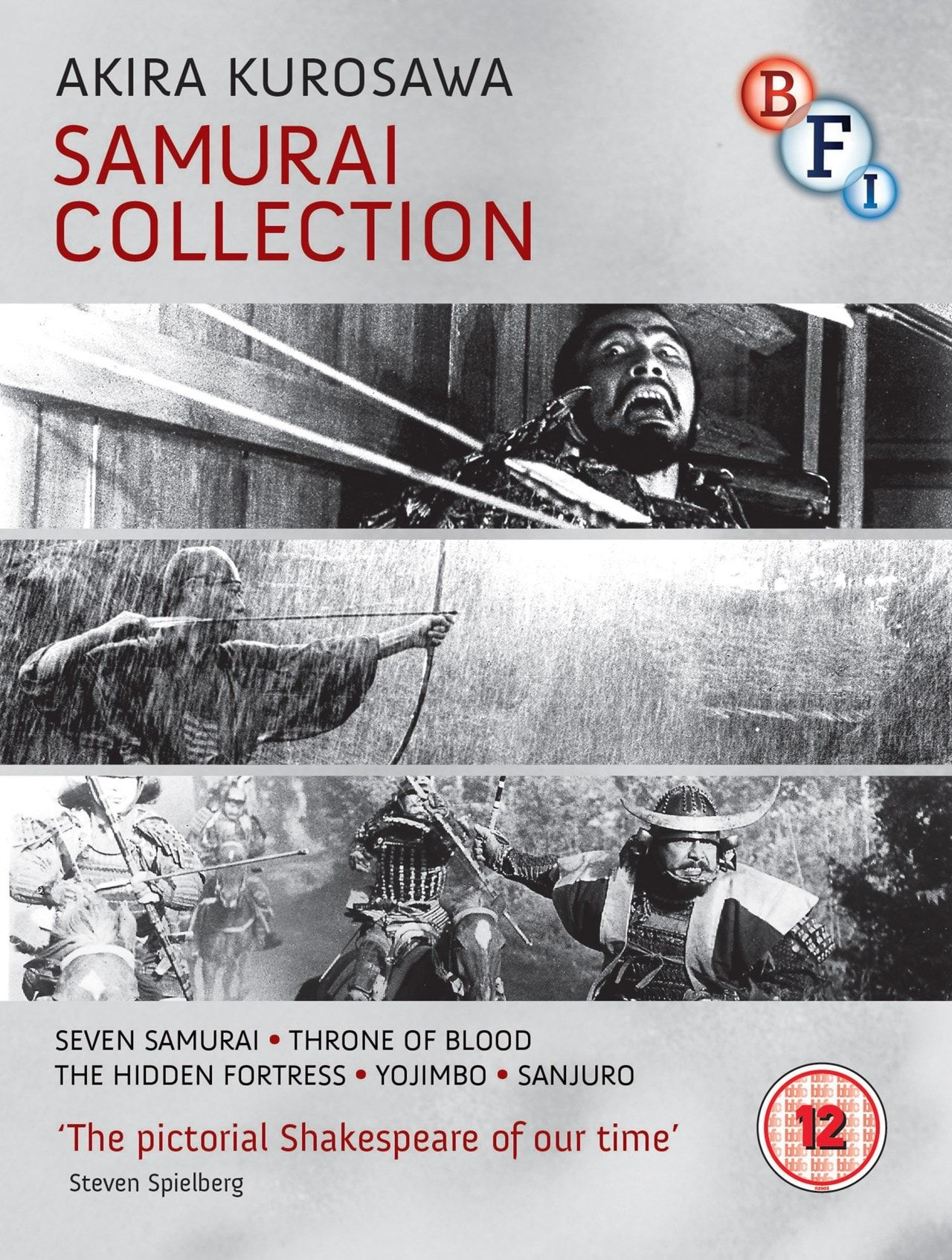 Five classic samurai films by the legendary Japanese director, Akira Kurosawa. 'Seven Samurai' (1954) tells the story of a group of 17th-century warriors recently detached from the powerful masters who once paid them. Veteran samurai Kambei (Takashi Shimura) is the leader of the group hired by the residents of a village suffering at the hands of a marauding band of thieves. Five of his cohorts are trained warriors, but the sixth, Kikuchiyo (Toshiro Mifune), is actually the son of a farmer, desperate to earn his spurs on the battlefield. The basics of the story served as the blueprint for the western classic 'The Magnificent Seven'. 'Throne of Blood' (1957), Akira Kurosawa's film version of 'Macbeth', transfers the action to medieval Japan. A samurai warrior (Toshiro Mifune) is urged to murder his lord (Takashi Shimura) and his best friend (Minoru Chiaki) by a forest spirit and an ambitious wife (Isuzu Yamada). Kurosawa renders 'the Scottish play' through the conventions of traditional Japanese Noh theatre, creating what was reputedly TS Eliot's favourite film. The famous ending sees Toshiro Mifune caught under hails of arrows. Winner of the Best Director Award at the 1959 Berlin Film Festival, 'The Hidden Fortress' (1958) is regarded by many to be one of Kurosawa's finest, and has been acknowledged by George Lucas as the principle inspiration for 'Star Wars'. Set in 16th-century Japan, the story centres on rival clans, hidden gold and a princess in distress. Tahei (Minoru Chaiki) and Matashichi (Kamatari Fujiwara) are two cowardly soldiers on the run from an advancing enemy army. As they search the country for a cache of secret gold, they join forces with Rokurota Makabe (Toshiro Mifune), a samurai warrior who is escorting a fiesty princess (Misa Uehara) through enemy territory. The mismatched travellers then have to fight a number of battles before they finally come within sight of their goal. Kurosawa combines elements of the western and the film noir in the classic adventure 'Yojimbo' (1961). Yojimbo (Toshiro Mifune), a freelance Samurai warrior, sells his services to rival factions in a small Japanese village. When he is betrayed, he turns his skills against his former employers, determined that the two warring sides should destroy each other. 'Yojimbo' was later remade by Sergio Leone as the Clint Eastwood spaghetti western 'A Fistful of Dollars'. In the samurai spoof 'Sanjuro' (1962), a sequel of sorts to 'Yojimbo', shabby samurai Sanjuro (Toshiro Mifune) teams up with eight young warriors who seek out corruption among the elders of their clan. They also embark on a mission to rescue a kidnapped chancellor from a corrupt war lord.
PostTweetShare Share with WhatsApp Share with Messenger
Community Updates
HMV DealsHMV promotional codes
New Comment SubscribeSave for later
4 Comments
4th Jun
Heat for Kurosawa. I've see quite a few of his films and the last one mentioned in the paragraph - Sanjuro - has to be one of the best samurai movies. Other great samurai movies (not from Kurosawa) include - The Sword of Doom (1966); The Twilight Samurai (2002); Lone Wolf and Cub (1970s).
4th Jun
Have gone for these to replace my DVD set, hopefully a nice upgrade.
Are these transfers the same as the Criterion ones?
4th Jun

No. Those are Criterion’s own and have not been licensed for anyone else to use. Haven’t seen the transfers used on the BFI releases myself but word on the forums is that they’re good and an improvement on the DVDs. BUT they’re ‘off the shelf’ from Toho with some extra noise removalas opposed to the full bells and whistles job that Criterion did.
Edited by: "Motoko" 4th Jun
7th Jun
Really nice set of some of Kurosawa's best movies. Really, The Hidden Fortress is the only one in this boxset I wouldn't rate 5/5. Bought it a few years ago in Sainsbury's for about this price.
I'm still holding out hope that Criterion will do a huge boxset for Kurosawa like they did for Bergman. He's certainly got the filmography for it.