I have the "giant" version which was on promotion earlier in the season, the frame of which which was easy to assemble, glad I didn't put the cover on given recent storms!

So this isn't goingto be as robust as a "proper" aluminium and glass greenhouse, but at this price, it's worth getting, as long as you only expect it to last a couple of seasons, but it WILL provide a sheltered enclosure to start your seedlings off in spring (I wouldn't put it up intil after winter)

Rather than describe as a greenhouse, consider a "mini polytunel"

Pros: Inexpensive, easy to assemble
Cons: May find it transports itself several miles down the road if erected in an exposed location!

My plan is to anchor the frame down with 75cm steel pins, but hold off putting it up until after the winter storms. The cover has flaps along each edge which they suggest should be secured by putting in a filled-in trench.

Seven in my local branch of Homebase (Craigleith) listed on their website so presumed national. 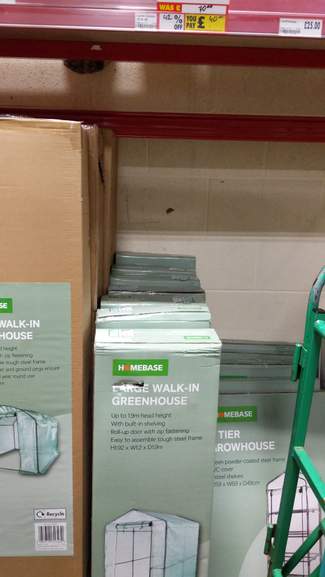 Standard, named and next day delivery is from £6

Click and Collect is free, your items will be ready for you to collect within 1 hour.