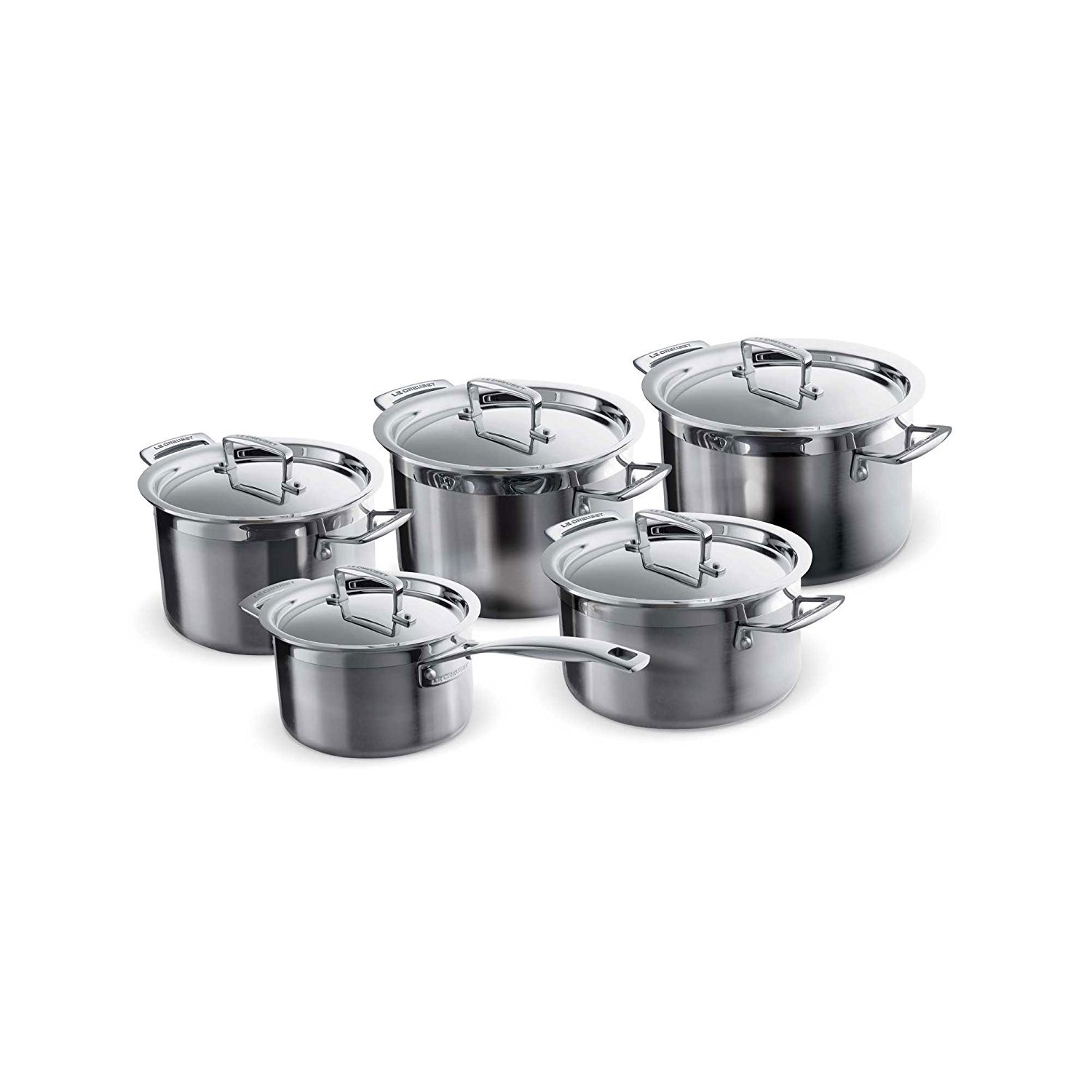 Not voting either way, but what you talk about is the obvious trade-off, isn't it? If it has plastic handles, you will be able to pick up a pan without burning your hands, but it's almost certainly not BIFL (buy it for life) and you will rely on future availability of spare parts when (not if) the plastic handles break. My mom has a set of AMC pans which she bought in the 70s, and spare handles are still available. With the steel handles such as on this set, you will need kitchen towels to pick up the pots but if the pans are decent quality (as the Creuset ones undoubtedly are) they will truly last for a lifetime.
16th Nov 2019
I have some Le Creuset stainless steel pans I bought off Amazon about 15 years ago and the riveted handles have started to come loose.
Edited by: "maddoglewis" 16th Nov 2019
16th Nov 2019
£299.99 for five le creuset pans is an absolute steal! Would be all over this if didn't already have a perfectly fine 2 year old Stellar set.
Edited by: "ck_" 16th Nov 2019
16th Nov 2019
Never had an issue with the handles getting hot with metal handled Stellar pans. Is that an induction hob issue?
Metal handles are a big plus as you can finish things in the oven.
16th Nov 2019

I bought lots of cookware from the "Le Creuset 3-Ply" and "Cerise Cast Iron" ranges back in 2013, costing over £2000s worth at a guess (used CCC to get the cheapest prices) and every single item is still in pretty much perfect condition. The exception being a couple of non-stick frying pans that have lost their non-stickyness.

The full stainless steel saucepans are still perfect condition and as long as you clean with a non scratch scourer, they come up as good as new every time and are effortless to clean

I've had cheap pans before and also some not so cheap pans and the "Le Creuset 3-Ply" are by far the best I've ever used or more importantly, had to clean.

I personally wish I'd bought them years ago and would advise anyone buying their first set of pans to get these if they can afford to as they will be the only set of pans you will ever buy (provided they are looked after).

The main photo is a bit misleading though and the description states (15cm pan is an error I think):

Even when you take into account the lowest price EVER on Amazon during the last 8 years for the above items (which they will never be close to ever again. I might add), the cheapest you could theoretically have bought the above items would be £272ish, with the current "Bundle Price" being only £28 more than that.

Good deal if you ask me!
Edited by: "Ripperoo" 16th Nov 2019
16th Nov 2019
I’ve got these - they’re superb! Conductivity is fantastic - can boil on the smallest burner. Heavy enough to be quality, not so heavy the wife can’t use.

Handles DONT get hot with hob use.

Look after them and they should last quite literally a lifetime.