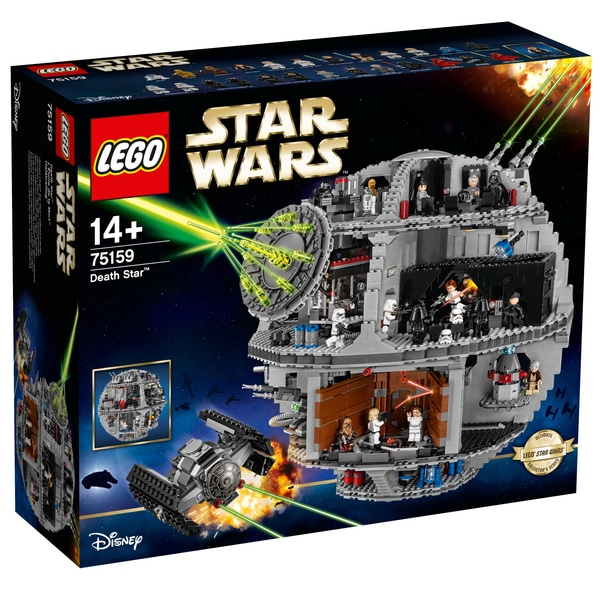 If you ever wanted this monster of a Star Wars set then now could be it!! Seen them selling on a famous auction site for more. Also comes with free delivery, happy spending!!!

Bring the LEGO Star Wars Death Star to life with over 4,000 pieces and an impressive 23 minifigures.

The Death Star is the ultimate Imperial weapon. Will you control it for the forces of good or evil? Recreate iconic scenes from the Star Wars saga in the Death Star’s huge maze of chambers, hangars and control rooms. Devastate the galaxy by activating the giant superlaser in the control room to destroy entire planets. Load up and fire the turbo laser’s spring-loaded shooters to keep the rebels at bay. With 2 movable turbo laser towers and seats for the 2 Death Star Gunners, the LEGO Star Wars Death Star is ready for battle. Can Obi-Wan shut down the tractor beam in time to defeat the Empire? You decide.

The detachable TIE Advanced features space for Lord Vader inside. Launch his craft from the hangar bay using the moving launch rack to help him get away, or help Princess Leia break free from the detention block and swing to safety! Storm Emperor Palpatine’s throne room and take on the Royal Guard with the included weapons. The LEGO Star Wars Death Star comes with 3 lightsabers, 4 blasters, 3 blaster pistols, 4 blaster rifles, 2 force pikes, 2 Force Lightning elements and a bowcaster. Relive Han Solo and Luke Skywalker’s adventures through the highly detailed Imperial conference chamber, Droid maintenance room, trash compactor and cargo area of this authentic model. Build and destroy the Empire’s fearsome Death Star to change the fate of a galaxy.

Lego Death Star
48 Comments
20th Nov 2019
Looks great, but it's far too easily destroyed. :-)
20th Nov 2019
This is potentially retiring soon too so may be the last chance to get it for any kind of cheaper price
20th Nov 2019
Cracking price, son loved building this, went on eBay after and didn't cost us much
20th Nov 2019

Unlikely, it's not listed on the LEGO website as retiring soon and it's so iconic and sells so well that LEGO can keep it in production forever. Last version lasted ten years!
20th Nov 2019

Because they haven't listed it as retiring yet. There's plenty of places online you can look up potentially retiring sets and this is very high on the list.
20th Nov 2019
£102 replica I paid from China, looks exactly the same, my kid doesn't even know the difference.
20th Nov 2019
Does it have a complete covering or does that one side have to be always open?

Lego Death Star
20th Nov 2019
Why did I see this. This is the only Lego set I wanted apart from stranger things and the Delorean which I own. Said to myself, if it dropped anyway lower, I would get it.
Mrs is going to kill me!!
Goodbye all 🙈
20th Nov 2019

£108.30 for the same thing on Ali Express Lego Death Star

£108.30 for the same thing on Ali Express Lego Death Star

I've bought loads of Lego off Ali Express, all have been fantastic, admittedly I've not bought this item but I wouldn't mind taking longer to build it if it saved £200

It depends if you're buying these to keep and display, or hold for resale value, or to give to a child to play with, if it's the latter I'd buy from Ali Express every time.
20th Nov 2019

Star Wart ??? Does this item give you warts

Do any of these sets come in an original looking box? Would love to save the money buying instead from Ali Express but how do I explain Santa ran out of proper boxes :/
20th Nov 2019

Some have the option of coming in a box, but not all....and whether that box comes in decent shape is another matter
20th Nov 2019

I thought the treehouse was the only plant based set?
20th Nov 2019

I thought the treehouse was the only plant based set?

Yeah it's only the leaves from the tree house and also some elements on the wind turbine so far.
20th Nov 2019

then there is starkiller base which is essentially Death Star 3
oh and another pre complete Death Star in Rogue One.
finally half of one for episode 9 that’s in the trailer

I never knew such a thing existed. How does it look?

As a LEGO fan with a key eye i would notice, poor quality and fake rubbish shouldn't even be advertised on this site. They are ripping off the LEGO company with cheap materials and losing the LEGO company potental sales.
Edited by: "minifig290" 20th Nov 2019