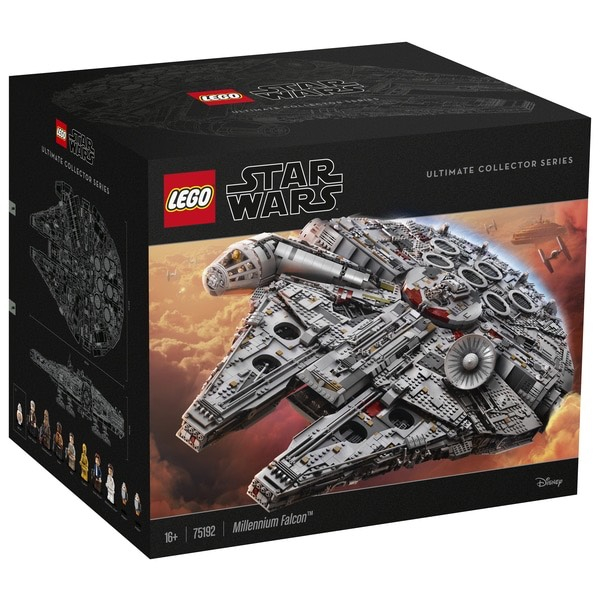 Usually £649.99 everywhere but with Smyths Toys £10 off every £50 in-store you can actually get it for £519.99 as they round up the penny. The lowest price I think it’s ever been at and I think it’s rumoured to retire next year at some point.

Embark on breath-taking Star Wars adventures with LEGO Star Wars 75192 Millennium Falcon. Build your Star Wars collection with the ultimate model of the most iconic spacecraft.

Ready the 7 landing legs and lower the boarding ramp to welcome your crew. The LEGO Star Wars 75192 Millennium Falcon comes with 4 classic Star Wars minifigures and 3 Episode VII/VIII minifigures, so you can recreate all the most iconic scenes. Seat up to 4 minifigures in the cockpit with detachable canopy.

The LEGO Star Wars 75192 Millennium Falcon is sure to make a stunning addition to any Star Wars collection. Simply change the crew and swap the sensor dish to transform your build from the classic Millenium Falcon to the iconic ship as it appears in Star Wars Episode VII and Episode VIII.
PostTweetShare Share with WhatsApp Share with Messenger
Community Updates
ADMIN
24th Sep 2019
Voucher info
Smyths Toys DealsSmyths Toys discount code
If you click through or buy, retailers may pay hotukdeals some money, but this never affects which deals get posted. Find more info in our FAQs and About Us page.
New Comment Subscribe Save for later
Top comments
24th Sep 2019
Finally went for it today!! £520 is very much real money but I’ve been promising myself this for a long time!!! I work hard enough to deserve a treat once in a while!!! ....also brought the Death Star which was £320 with the discount!!!.....no more treats for a while!!!
24th Sep 2019

You know something doesn't have to rise in value to be 'Worth it' don't you?

and you also know that just because you don't like something, doesn't mean that lots of other people have to dislike it too.... right... right?
24th Sep 2019

Seriously, some people have no sense, £320 on a Death Star.

You're going to feel pretty stupid when some little s**t in an X-Wing blows it to smithereens!
24th Sep 2019
That's a lot of money. Can I pay two hundred now and fifteen more when I get to Alderaan?
72 Comments
24th Sep 2019
Stop it
24th Sep 2019
Finally went for it today!! £520 is very much real money but I’ve been promising myself this for a long time!!! I work hard enough to deserve a treat once in a while!!! ....also brought the Death Star which was £320 with the discount!!!.....no more treats for a while!!!
24th Sep 2019
Bought it last time it was £520. WORTH EVERY PENNY!
24th Sep 2019
Great price since will soon will be retired and looks better value than the new destroyer
24th Sep 2019
Gutted. There’s no way I can justify this spend but awesome price for those that can afford it
24th Sep 2019
Unfortunately won't let me opt for Click and Collect. If you can afford it go for it this minute as it should treble in value within the next 3-4 years, that is of course you can resist opening the box and making it. Most Lego UCS sets increase in value given time, even when the initial price is very expensive like this set.
24th Sep 2019
Not worth it. This set will not rise in value. Hell people don’t even buy at discounted prices what makes you think people will spend over£1000 after it’s retired ? On the worst selling theme in Lego history (shart wars)
Edited by: "Amtw2017" 24th Sep 2019
24th Sep 2019
Ill go for it one day.. my finger is always on the add to basket button
24th Sep 2019

You know something doesn't have to rise in value to be 'Worth it' don't you?

and you also know that just because you don't like something, doesn't mean that lots of other people have to dislike it too.... right... right?
24th Sep 2019

Pretty much every UCS set has risen in value since its retirement. But don't let facts get in the way of a strong opinion.
24th Sep 2019

I laughed at this to you see them selling on Facebook for £500 and nobody buys them there is still stock in my local Smyths this set is not going to treble in value at all ever, absolutely nonsense. I suspect this is just somebody else who has read the press BS garbage about LEGO being a investment than gold.
Edited by: "snatch_master" 24th Sep 2019
24th Sep 2019

I can see people spending around £700-£750 when it's no longer available at retailers, more after several years. Not a massive return after fees n postage costs but it will rise for sure.
24th Sep 2019
brickpicker.com/bpm…2-1
24th Sep 2019

Great find but selling circa £500 new on the bay

Funnily enough, that was the only Lego Movie set that I bought - just had a quick look and it's worth quite a lot more than I paid for it back then!
24th Sep 2019
Good deal, have some heat. I'm going to hold off and hope that they do a similar deal for the new Star Destroyer at some point.
24th Sep 2019
Absolutely

I didn't realise the new Star Destroyer wasn't out until October.

Will wait until next years Smyths deal and pickup the ISD then.

Can't wait....... even if it is ridiculously overpriced.

It's out already, but only for VIP's. It looks great to me, I think people are hung up on the part count compared to the falcon. I bet if you went on weight and size, the SD would compare more favorably as it has lots of large panels. Definitely overpriced though, can't argue with that. Which is why I'll be waiting for a good deal on it such as this.
24th Sep 2019

Tell me you're going to build them, not leave them in the box.

I hope you are correct in your prediction fireman1; I am a Lego collector and re-seller of Lego sets and am fortunate enough to currently have 4 of these sets in my possession which were bought at full rrp. I'm now off to my local Smyths after successfully selling some more Lego last week and am going to buy another UCS Millennium Falcon.
TTFN.

Can’t see this increasing in price, so many think it’s too expensive as is.

Yes, it is a trifle expensive, however if you have monitored Lego prices over the past 15 years or so like I have, it would be a dead cert that this set will double in price at the very minimum. Some of the first Millennium Falcon sets launched more than 10 years ago are now fetching between £1700 - £1900.
24th Sep 2019 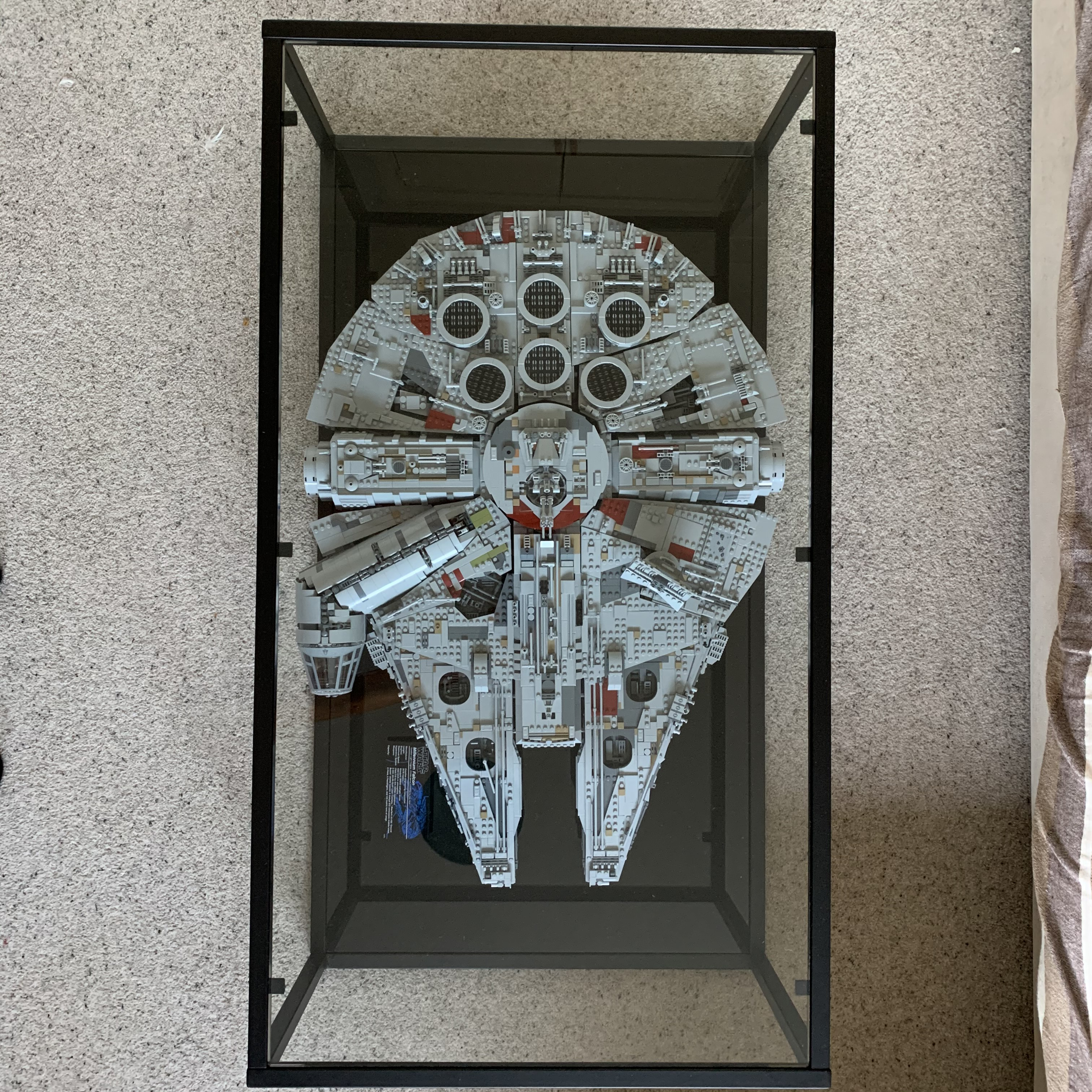 24th Sep 2019
You would be advised to see one in the flesh before buying. It's massive which is why I believe any future price inflation will be limited, as most people just don't have the space.
Edited by: "Kingalf" 24th Sep 2019
24th Sep 2019
Didn't realise people were buying lego set as investments..most of the fun is in the building of these things. I recently purchase the 911 rsr which was great fun making. Also bought the ninjago ship which I built with my son. Would love to open this up and build it as really can't see why anyone would buy it in the hope it makes them £500. But then I guess this is relative to how much people earn. I guess personally it just seems a waste of a toy. .... having said that my cousin has several original 70s and 80s star wars figures and ships all in original boxes. Don't know how much his collection is worth but Dont think he would ever sell it.
24th Sep 2019
Hold out, I think it could get as low as £350 around black Friday.
24th Sep 2019

That’s what has stopped me from being tempted. I’ve got The SHIELD Helicarrier and that’s big enough. I’d have nowhere to display this beast!
24th Sep 2019

Seriously, some people have no sense, £320 on a Death Star.

You're going to feel pretty stupid when some little s**t in an X-Wing blows it to smithereens!
24th Sep 2019

My friend. There is no telling if Smyths would reduce the price of this and if so by what amount, especially given the current financial and political situation of the country at the moment. Unfortunately I am not Marty McFly and was able to travel Back To The Future and know that Smyths was going to offer 20% discount.
Fortunately I make quite a good return on my Lego investments that I later re-sell, so was more than happy to pay the RRP at the time. I didn't buy the first 4 sets at the same time, so was able to save in between the purchase of each set.
One must speculate to accumulate, and am more than confident that I will be able to increase my investment by at least 200% when I come to sell them.