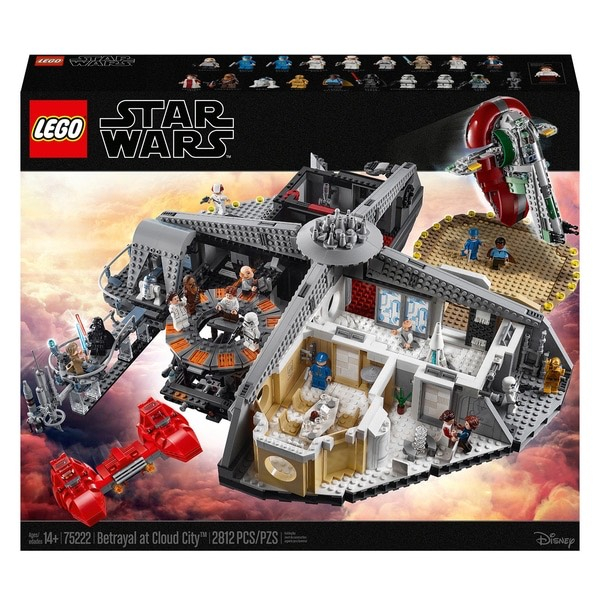 Saw this deal in store today and turns out it's nationwide!

Jump in your Twin-Pod Cloud Car and get ready for a LEGO 75222 Star Wars Betrayal at Cloud City, suspended high above planet Bespin! Intercept Boba Fett in his Slave I ship as he docks at the landing platform. Help Luke defeat Vader in a Lightsaber duel on the sensor balcony. Rescue Han from the interrogation room and save him from being frozen in the carbon freeze chamber! Help Chewbacca stop the Ugnaught from melting down C-3PO in the scrap processing room. Tiptoe past the Stormtroopers on the promenade with Leia and Lando and join the Dark Lord of the Sith himself in the dining room. There’s never a dull moment in Cloud City!
PostTweetShare Share with WhatsApp Share with Messenger
Community Updates
Smyths Toys DealsSmyths Toys discount code
New Comment Subscribe Save for later
17 Comments
19th Jan
Tbh you want sub £200 prices for this to be a deal. No home delivery and stock is questionable depending on where you live...
19th Jan
I got mine for £185 so cold from me sorry

But thanks for the post
19th Jan
Only 12 out of the 60 odd smyths stores have this so yeah hardly national imo
Edited by: "minifig290" 19th Jan
19th Jan
This set is soon to be discontinued so I’ve bought mine as an investment.

It’s a quirky set
19th Jan
Has been cheaper before Christmas at £180-£185, cold from me, sorry.
19th Jan
Heat added thanks op.
19th Jan
It's a poor set, the price is crazy
19th Jan
I think it has been for ages at this price in Smyths.
19th Jan
Roll on Death Star deal!
19th Jan
Nice figures, rubbish set overall.
19th Jan
The more I look at it, the worse it gets. Its just a random, sloppy, mismatched playset. The deathstar had a similar idea but at least it was the correct shape. Maybe if it were made with a symmetrical structure and properly scaled it might be better, but this represents nothing of Cloud City except for a few scenes arranged poorly.
20th Jan
Curious as to where was this on sale for £180-185? Lowest I've ever seen was £200
20th Jan

John Lewis had it on sale at £179.99 in Mid-August last year. Not much help now, but you said you were curious!
20th Jan

Likewise. Even thinking of getting another before it goes. This'll set will be looked at in a whole different light in 12 months time.
20th Jan