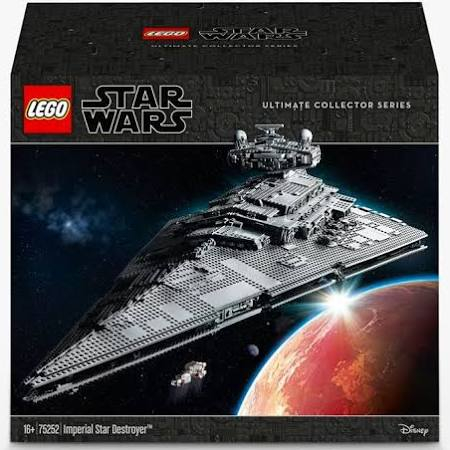 Build and display an icon of the Galactic Empire – the Devastator. With over 4,700 LEGO® pieces, this Ultimate Collector Series 75252 Imperial Star Destroyer model captures all the authentic details of the starship as it appeared in the opening scene of Star Wars: A New Hope, including swiveling guns, a tilting radar dish, huge engine exhausts, intricate surface detailing and of course a buildable scale version of the Rebels' Tantive IV starship to chase down. This galactic civil war UCS set also includes a display stand with informational fact plaque and 2 Imperial minifigures, making it the perfect LEGO Star Wars collectible for discerning fans.
PostTweetShare Share with WhatsApp Share with Messenger
Community Updates
22nd Apr 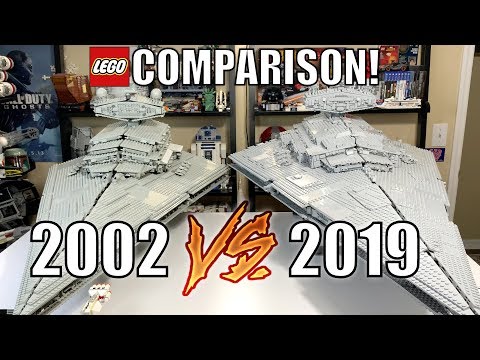 Mate, it's fine if you don't want to spend money on Lego, but why come on here and spread negativity? This is a deal website, there is nearly 15% off the RRP, so it's a deal.
22nd Apr
I'll just go get that 550 notes from my piggy bank for a Star Wars lego model.
22nd Apr

"This is not the deal you're looking for"
22nd Apr

Mate, it's fine if you don't want to spend money on Lego, but why come on here and spread negativity? This is a deal website, there is nearly 15% off the RRP, so it's a deal.
22nd Apr

I’m not taking the mick, I genuinely had no idea Lego made such expensive high end sets!
22nd Apr
Cracking deal, maybe..
22nd Apr
Quick Calculation = 12p per piece (approx.)
22nd Apr
I will wait until it is below £500 but great deal heat added
22nd Apr

"This is not the deal you're looking for"
22nd Apr
Would love this, but would probably distract me from working at home
22nd Apr

RRP for this is around 650, the most expensive set they currently sell.
This and the Falcon.
22nd Apr
Wow!
22nd Apr
£100 off? Massive heat! Would love this, just don't have the room to display it!!
22nd Apr
Must resist the dark side.

You could purchase this and resell it easily.

If it was not so grey I might be interested, only trouble is the wife will notice the huge box being delivered and I am not sure I can get away with this.

You should see the full size Death Star
22nd Apr
So tempted, considered tearing apart the UCS Falcon just for something to do in the evenings.
22nd Apr

That’s way too high, over pricing it for no reason except to get the adult collectors. Most Lego when gets to its usual discounted pricing of common sets can be 5 to 7 pence a piece. If you want this then it’s best you’ll get
22nd Apr
You could buy a real one for that!
22nd Apr

To be fair, there is price range for almost any product with lower and higher ends. So from trainers to mobile phones to cars. Thank goodness for choice otherwise you would be stuck products that broke all the time or had poor quality control.
Edited by: "AnkerMan" 22nd Apr
22nd Apr
Would love this but Lego are gauging adults for these sets - at half this price I bet they'd sell a lot more!

The third picture along is absolutely hilarious, the guy is just sitting ten feet away looking deep in thought. Realistically he should be waving it around making pew pew noises, not considering it like an art piece!
22nd Apr
That’s an eyesore unless it’s in a room full of Star Wars shizzle.
22nd Apr

Would love this, but would probably distract me from working at home

I find your lack of faith disturbing.
22nd Apr
Would love it, but zero chance of sneaking it past the wife... Heat added though
22nd Apr
Hoping they do the same deal on the falcon.
22nd Apr
Heat added, but I’m after the falcon
22nd Apr

Having watched videos of it being made there is a lot of big pieces in this set which likely account for the higher then normal price per part.
22nd Apr
Fab deal. Shame I don’t have the £ for it - or space - house is already being overrun by sons Star Wars Lego and the loft is filling with the boxes
22nd Apr
Good price but it's a dull and boring model, just a big light grey triangle. If you're spending this much and don't have it already the Falcon is much much better, and then for cheaper the UCS Y-wing is cool, and the new A-Wing looks good too. If you need to stay Imperial then get the Death Star. This thing is just too big and boring imo.
22nd Apr
Damn i want it, but it is just so much Gray....personally i think this set could go lower in price to sub £500 as i dont think it has done anywhere near as well as the UCS millenium falcon.
22nd Apr

Just use that old Jedi mind trick on her
22nd Apr
Can you buy a Lego Death Star to crash this into?
22nd Apr

Can you buy a Lego Death Star to crash this into?

Yes, the Death Star is still available, However, this is a Star Destroyer, not a Super Star Destroyer, so it would not be movie accurate! Also, the scale would be ridiculously wrong.
It's already been done anyway -> youtube.com/wat…fLo
Edited by: "Octowuss" 22nd Apr
22nd Apr
How viable are these as an investment?
22nd Apr
This is a welcome distraction from trainers, phones and fragrances.
22nd Apr

How viable are these as an investment?

Better than oil
22nd Apr
Heat added. Ordered one. Got it for £517 after using wife’s corporate website.
22nd Apr

Would love this, but would probably distract me from working at home

Use the Force Gary.....use the Force
22nd Apr
HEAT! Was holding out for LEGO May 4th promo in the hopes they have some sort of discount on it (wishful thinking). Managed to get it for a total of £528 with my works scheme! Thanks OP
22nd Apr
Impressive ...most impressive
22nd Apr
This deal is a test of my willpower.

Do I really need a Star Destroyer
22nd Apr
My dream ....expensive one ...well some, day some day my love