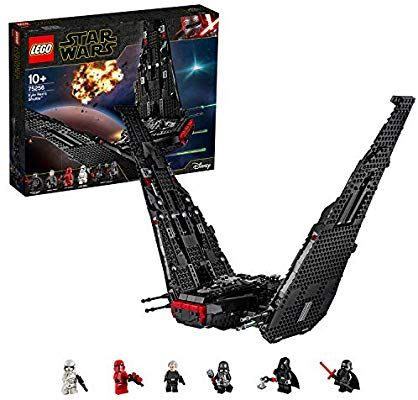 "Play out space-faring adventures with 75256 Kylo Ren’s Shuttle. This LEGO Star Wars™ building toy version of the Supreme Leader’s personal starship from the Star Wars: The Rise of Skywalker movie has lots of details to excite kids and collectors alike, such as a rotatable right engine for folding in the wings when landing and the ability to shorten the wings by folding the top part down. There’s also an opening access ramp, 2 spring-loaded shooters and a cockpit with space to sit Supreme Leader Kylo Ren and 2 minifigures behind. As well as the Supreme Leader, this great LEGO Star Wars ship set also includes General Pryde, a Sith Trooper, First Order Stormtrooper and 2 Knights of Ren for instant play action.

Contains 1005 pieces."
PostTweetShare Share with WhatsApp Share with Messenger
Community Updates
Amazon DealsAmazon discount code
If you click through or buy, retailers may pay hotukdeals some money, but this never affects which deals get posted. Find more info in our FAQs and About Us page.
New Comment Subscribe Save for later
8 Comments
8th Dec 2019
Really cool set. Really want this set at some point, but I shall hold out for 60-something.
8th Dec 2019
The wings only go as low as the picture, or totally vertical.
8th Dec 2019

The wings only go as low as the picture, or totally vertical.

Yes, exactly as in the films

You’ll be waiting a while

Yeah, it's a pretty new set, so I'm not expecting that kind of reduction for quite some time yet. Maybe not until later next year. But it's fine, I'm pretty patient when it comes to waiting for the right deal on LEGO.
Edited by: "Oh-Totoro" 8th Dec 2019
8th Dec 2019

I’d offer to get you one with my JL discount but they haven’t price matched Amazon yet, hopefully will show tomorrow at £54.75. I can give you a message when I put a couple on eBay.. I’ll be pricing around £69 delivered
I just think life is short so for the sake of a few quid, I’ll do my best to help
9th Dec 2019