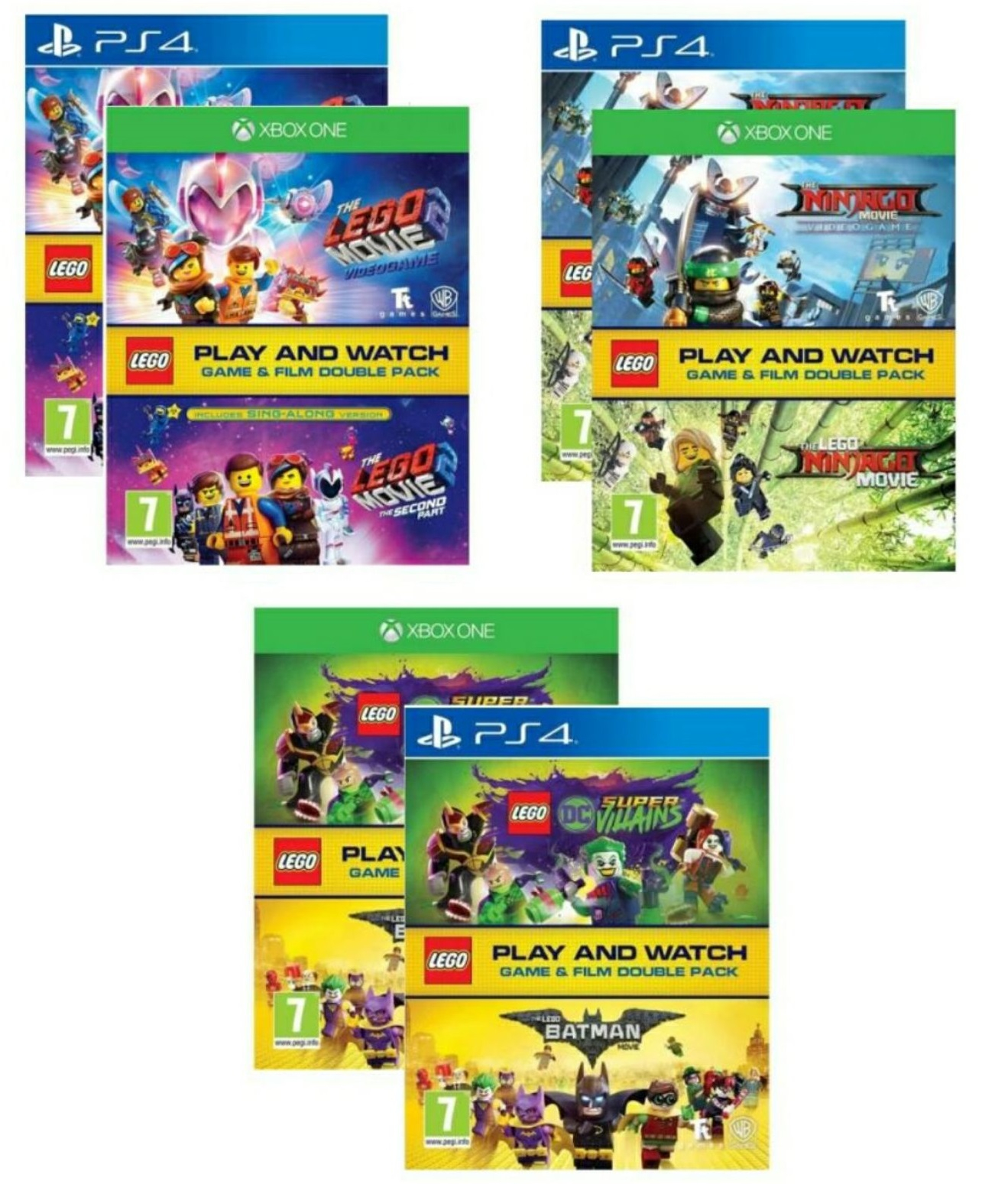 LEGO DC SUPERVILLAINS DOUBLE PACK PS4
LEGO DC SUPERVILLAINS DOUBLE PACK XBOX ONEDESCRIPTION
Embark on an all-new LEGO® adventure by becoming the best villain the universe has seen in LEGO® DC Super-Villains. For the first time, a LEGO® game is giving players the ability to play as a super-villain throughout the game, unleashing mischievous antics and wreak havoc in an action-packed, hilarious story written in collaboration with DC Comics. Set in an expansive, open world experience within the DC Universe, the Justice League has disappeared, leaving Earth’s protection to their counterparts from a parallel universe, who have proclaimed themselves as the ‘Justice Syndicate’.

Sometimes, it takes more than a superhero to get the job done and it’s up to the player and a crazed group of misfits to uncover the intentions of Earth’s new, strange, wannabe superheroes. Joined by renowned super-villains: The Joker, Harley Quinn, Lex Luthor, Deathstroke, Killer Frost, Sinestro, and countless others from the Injustice League, players will set out on an epic adventure to ensure their villainy remains unrivaled.

It’s Good to Be Bad – The Injustice League won’t stand for second-best when it comes to villainy. Never have players ventured through the LEGO universe from the unique perspective of a villain. By embracing their inner super-villain, players will battle opponents, solve puzzles, and overcome obstacles using menacing pranks and tactics experienced best by being one of the bad guys.

Custom Built Super-Villains – Players create their own unique super-villain at the start of the game or choose from pre-set villain characters who will be the main character and center of the story. The look, style, abilities and back story of their villain can be customized. Players will unlock new abilities, powers and customizer elements as they progress through the story.

Outrageously Funny DC Comics Story – Players must fight evil with evil throughout an original, humorous story written in collaboration with DC Comics. Whether it’s Graffiti Spraying the city walls or using Fear Toxins to scare characters nearby and give them a fright, super-villains have full reign to use any tricks in their arsenal to stop the Justice Syndicate’s evil scheme.

New Locations to Explore – The game’s main hub is set in Gotham City and Metropolis, and features other DC Comics locations and landmarks including Smallville, Hall of Doom, Hall of Justice & the Justice League Watchtower.

Team Up Through Co-Op Gameplay – Friends and family can join the game at any time using the two-player local co-op experiences. Players can team up in epic boss fights and more.

Crime Hub Events – Separate hero and villain led crime hub events allow players to pull off a heist alongside other villains or take down the bad guys in heroic missions.
Contains - LEGO Batman the movie on Blu-ray and LEGO DC Super-Villains on PlayStation 4/XBOX ONE
LEGO MOVIE 2 DOUBLE PACK XBOX ONE
LEGO MOVIE 2 DOUBLE PACK PS4
DESCRIPTION
Based on events from The LEGO® Movie 2: The Second Part, alien invaders have left Bricksburg in ruins! It is now up to Emmet, Lucy and a host of heroic characters to go beyond their world and save their friends from the strange inhabitants of the Systar System.

Packed with fan-favourite and exciting new characters, mysterious locations and action from both the sequel and the original blockbuster The LEGO® Movie, The LEGO® Movie 2 Videogame is a wild adventure for kids to explore. Players must scour the stars for rare items, materials and tools to complete their collections and help their journey across the LEGO® universe, experiencing a wide array of amazing environments, wacky vehicles and incredible creatures along the way.

The LEGO® Movie 2 Videogame is a one-of-a-kind experience full of fantastic characters and open-world adventures with a strong emphasis on creative solutions to puzzles and building within the film’s universe. LEGO® fans of all ages will have fun rebuilding their own world using tools to create roads, change the landscape and build structures to unlock more rewards and missions.

LEGO NINJAGO DOUBLE PACK XBOX ONE
LEGO NINJAGO DOUBLE PACK PS4
DESCRIPTION
The LEGO NINJAGO Movie Video Game will allow players to delve into the world of the new big-screen animated adventure The LEGO NINJAGO Movie. In the game, players battle their way through waves of enemies with honour and skill as their favourite ninjas Lloyd, Nya, Jay, Kai, Cole, Zane and Master Wu to defend their home island of Ninjago from the evil Lord Garmadon and his Shark Army. To do so, they must master the art of Ninjagility which allows them to traverse Ninjago by wall-running, high-jumping and battling the foes of Ninjago to rank up and upgrade the ninja’s combat skills. Players can harness the power of Spinjitzu combat to defend Ninjago together.
Game Features

Get both the game and movie in this double pack!
PostTweetShare Share with WhatsApp Share with Messenger
Community Updates
The Game Collection DealsThe Game Collection promo code
If you click through or buy, retailers may pay hotukdeals some money, but this never affects which deals get posted. Find more info in our FAQs and About Us page.
New Comment Subscribe Save for later
2 Comments
26th Nov 2019
Does anyone know if the blurays are in separate cases sealed or is it a disc in with the game?
26th Nov 2019