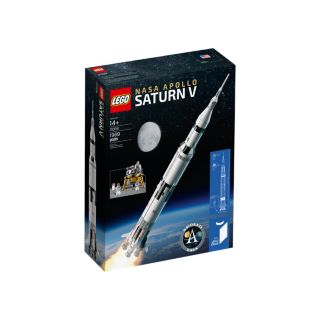 Big drop on this bad boy.


Join LEGO and NASA on a new mission – build your own LEGO version of NASA’s Apollo Saturn V! Between 1967 and 1973 the Apollo Saturn V three-stage liquid-fuelled super heavy-lift launch vehicle took multiple missions beyond the limits of earth’s atmosphere and on 16th July, 1969 took the first manned mission to the moon.With 1969 pieces this is a challenge for any LEGO enthusiast. You can build the 3 stages of this stunning meter-high rocket and display it on the stand or launch into orbit. Offload the S-IC and S-II sections, dock the lunar lander with the command service module and complete a successful Moon landing mission!
PostTweetShare Share with WhatsApp Share with Messenger
Community Updates
Lego Shop DealsLego Shop promo code
If you click through or buy, retailers may pay hotukdeals some money, but this never affects which deals get posted. Find more info in our FAQs and About Us page.
New Comment Subscribe Save for later
44 Comments
29th Nov 2019
LEGO Disney Train & Station is without a doubt the best deal: hotukdeals.com/dea…949
29th Nov 2019
Website is crashing due to the 1989 batmobile release
29th Nov 2019
Website constantly crashing
29th Nov 2019
Amazing. Thanks OP
29th Nov 2019
managed to get to the PayPal stage then crashed again
29th Nov 2019

Really dissapointing that a large company like Lego cant handle traffic like this during a sales event. If they spread out their sales and stock, this wouldnt be an issue...
29th Nov 2019

Totally agree, if its like this on their website im expecting there to be no doors on hinges or shutters in place at any LEGO Store from 9am today with rushes of people shoving for cheap and new and free sets. The joys of Black Friday, clearly lessons need to be learnt from LEGO
29th Nov 2019
Eventually got it through
29th Nov 2019

Eventually got it through

Seems like somethings happened, all of a sudden its working fine now
29th Nov 2019
Yup same here, took a few random clicks and refreshes but got the batmobile
29th Nov 2019
Bye, bye money. Another one to add to my collection of unopened sets to build on a rainy day. At least it's also another bonus 600 air miles.
29th Nov 2019

I read the free batmobile is only available in the first week. If it’s as limited as they say it is it’s worth the punt now
29th Nov 2019

The only reason is to get the mini version that comes free with it until the end of the weekend, or whilst stocks last. But the Disney train was too tempting at 30% off compared to normal price for this so I went with the train instead. Unless I win the lottery tomorrow, of course...
29th Nov 2019
Heat added for the Saturn V price, btw! If I didn't already have it I'd have bitten for sure at this price!
29th Nov 2019
If people still have trouble using paypal, try using a direct debit card instead if thats an option. I had better success with DD.
Regarding the batmobile, theres no chance of a drop anytime soon especially if its exclusive to only Lego store. With xmas around the corner prices will only go higher especially if it sells out...
29th Nov 2019

Yep, expect to see loads for sale on ebay and amazon marketplace over the coming days. I still prefer the train though
29th Nov 2019
just ordered after a bit struggle and trying all options. Eventually PayPal was successful
29th Nov 2019
Elvis has left the Building.
OOS.
29th Nov 2019
Hours of frustration with the site - finally managed to snag one using browser on phone on bus and Paypal.

For once in my life, persistence has paid off.

out of stock already!!!

Has the freebie ended? Ive added both to basket n it isnt saying free
29th Nov 2019

Has the freebie ended? Ive added both to basket n it isnt saying free

If you’re talking about the 1989 Batmobile set and free mini Batmobile then I’m not sure as I haven’t been online at the Lego store this morning.
29th Nov 2019
OOS online but I just nipped into the Lego store in Leicester Square London and they had a bunch in stock at the same price. The web stock checker didn't say it was in stock so I'd suggest if you're nearby a store, just pop in! There was a mad rush for the Batman sets!
29th Nov 2019

Thanks for info. Lego store seems like they need to improve on a couple of things like their website struggling during sales events and now their stock levels not being reported correctly....Are you still at the store by any chance?
29th Nov 2019

I just left about 10 minutes ago

Too bad, i was going to ask if you could check on a set for me
29th Nov 2019
I battled to buy one of these this morning, kept saying something went wrong. Drove to work....oos
What are the chances of them coming back in to stock ? Before the end of the offer
29th Nov 2019
ffs