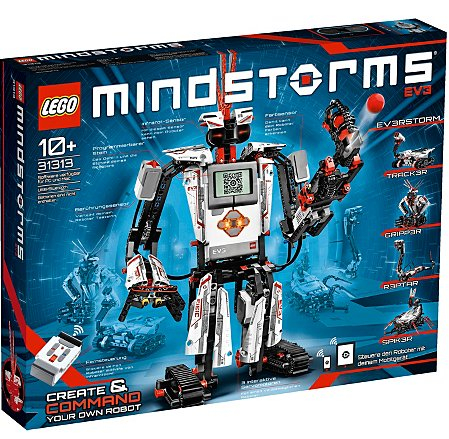 Been looking out for this and this is cheapest it's been for months. Down to £210 on asda website but if you spend over £100 you get £20 off so makes it & £190. Plus free click and collect
PostTweetShare Share with WhatsApp Share with Messenger
Community Updates
George (Asda George) DealsGeorge (Asda George) discount code
New Comment SubscribeSave for later
27 Comments
22nd Sep 2015
Would this be interesting to a 5 years old who crazy about robots if his dad builds and programs it?
22nd Sep 2015
Still use my Mindstorms NXT, would love this
22nd Sep 2015

I haven't got one, but I have got a 6 year old interested in Lego and building stuff etc, I have given this some thought in the past.
I would hold off a few years, these are the reasons I came up with for me.

Because they have changed it before and made it better,
Because he won't get the use out of it he should till he's older.
Because they may come out with a completely different model.
Because it may get cheaper in the meantime.

Etc, software may change, the robotics world is changing so fast, don't jump in now, wait till he's a decent age to use it and get it then.
Hope this gives you some thought!
22nd Sep 2015

You are most likely right there. thanks for the reply. I will think it through. His dad built one before and programmed. The small one is taking apart broken electric staff and taking out parts and collecting them for his robot. I thought this would make his life a bit easier.
22nd Sep 2015
Ok who buys this dont forget topcashback. It is 6.3% on toys
22nd Sep 2015

Ok who buys this dont forget topcashback. It is 6.3% on toys

Don't know about Quidco but Asda never pays TCB. It tracks but Asda always decline the cashback in the end.

Totally disagree. If software professionals did as you suggest, they'd never build a single product!

Get your kid into this as soon as they're interested - if a child shows technical interest and ability, encourage it as best you can. You can view this as a toy, or as a gateway into computing and an excellent way to encourage your child towards a rare combination of creativity and logic. There will always be new products coming out. That's industry. Holding off on, say, the latest Apple product may make sense, but your child will only be a child once - make the most of that time to help them learn and develop as much as possible!

I'm not saying Lego is the only way to do this, I'm just noting the difference between 'buying a toy' vs 'investing towards a child's future'.

As a career software professional, previously a child, I speak from experience.
Edited by: "stringsonfire" 22nd Sep 2015
22nd Sep 2015

Totally disagree. If software professionals did as you suggest, they'd … Totally disagree. If software professionals did as you suggest, they'd never build a single product!Get your kid into this as soon as they're interested - if a child shows technical interest and ability, encourage it as best you can. You can view this as a toy, or as a gateway into computing and an excellent way to encourage your child towards a rare combination of creativity and logic. There will always be new products coming out. That's industry. Holding off on, say, the latest Apple product may make sense, but your child will only be a child once - make the most of that time to help them learn and develop as much as possible!I'm not saying Lego is the only way to do this, I'm just noting the difference between 'buying a toy' vs 'investing towards a child's future'.As a career software professional, previously a child, I speak from experience.

Completely agree. My 7 year old son has autism and gets bored of the usual toys easily but really is into technical things. Bought him the Lego motors set for his birthday and the things he's made with it are so clever, way beyond his years. By playing with it, he's learning how things work mechanically. We've got this for him for Christmas because I know it's one thing he will constantly play with and will increase his knowledge on programming aswell as engineering.
22nd Sep 2015
Thanks OP for posting this! Been waiting for this to drop in price for a while. Ordered one
22nd Sep 2015

Do bears poop in the woods?

Have a look/think about the various small programming boards too. A lot of those are designed to be the interface between computers and electronics. While they aren't as "neat" as lego (in that they can do much more but you have to have the initiative) they're vastly cheaper and more open ended.

Arduino is one of the more well known ones on PC. A Raspberry PI has quite a bit of control over it's various ports and terminals too with a bit more power to it.

For something they'd be able to learn with your help, this is probably about the right "toy" at the right time. Consider some of the small programming devices though if you have enough of an interest yourself as a tool for inspiring. Arduino is about £5-30 for a cheap board, PI is about £50 for a decent starter kit. Money well spent imo if they/you have interest.
Edited by: "llamaalarmallama" 23rd Sep 2015
23rd Sep 2015
Amazing set, doesn't look much, but what can be built with it is awesome. Got this for my son last Xmas and he loves it.
Especially the mindstorms Rubik's cube solver (google it!).
Agree it's a good price, but if you have tesco Clubcard points it was in the Clubcard boost last year, so I managed to get it for £100 worth of vouchers.
Heated!
23rd Sep 2015

​Yes, if the child has the interest in building it and playing with it. I've had this since last year and you get instructions for the first build and isn't too difficult, my son built it (a few years older) but he could have done it when younger and should be easy enough for daddy. both together and they'll do it fine. It is the fiddly bits that are the hard part as with all Lego.
You then get other models in PDF/app/website to follow, all there ready to build, download the program to the brick and go. no programming actually needed, but a budding person will alter and play with the program. it's all visual.

then once they have built, altered and made through he models you can keep going as they wish ...

So think of it as a Build A Robot and play at its basic, and a full sensor and control system at it most complicated.

you will need a PC to do the programming and to add more fun for the kid a Bluetooth enabled tablet/phone to control it, but that is not essential. Don't worry about future proof, it'll be around for a while as are the NXTs. It's the principles that matter, not it specs when a child.

also a battery charger and a lot of rechargeable batteries (Amazon basics will be good for that).

Yes get a 5 year old a Raspberry PI. Toddlers are excellent at operating Linux on the command line... FFS.

Listen to that first (only) person that talks sense. Wait a few years to spend your 200 quid. Bye him something more age appropriate until then... possibly simpler Lego models.
23rd Sep 2015

Hi, thanks for your input. We still looking at what is out there. His dad is familiar with pi and mindstorms. It is just he wants to build a robot. He is determined for his age and he is collecting parts from various broken electric staff with his own little tool kit. im aware he wouldnt be able to do this himself but Im looking at this as it will be a good project for both him and his father and many hours of fun.
23rd Sep 2015
Can I suggest taking your kids to a Coderdojo or Raspberry Jam if they are interested in technical eg programming and Raspberry Pis. PM me if you want more info.
23rd Sep 2015

You know he is only 5. He is interested in the idea of building a robot. He is doing it from different blocks and he is collecting parts for it but really he has no idea I guess how it works. I was looking at different clubs bit I dont want something too overwhelming for his age for now. Unless there are similar age children there.
23rd Sep 2015
How do you get the £20 off - is there a code to be used or is it automatically applied?
23rd Sep 2015

I was starting to think I was the only realistic person here!

Don't get me wrong, I'm dying to buy one, so I can play with it and he would love it, but he wouldn't get any real use out of it. And by the time he is ready for it, it would be old news to him.
I want him to unwrap it as a present and be thrilled with it and knowing what he can do with it, at the moment he just wouldn't understand it properly, as well as not being able to read the manual!
23rd Sep 2015
Looks like the toy offer is finished now. Not taking off the £20, glad I got one yesterday.
24th Sep 2015
Since the £20 offer is finished it's now the same price on amazon
24th Sep 2015

I did re-read my reply, the inflection from it is "Pi / Arduino is more suitable". Not what I meant.

"For something they'd be able to learn with your help, this is probably about the right "toy" at the right time." I actually meant, the lego stuff will be better now. It's like the pi/arduino "on rails" with a nice front end etc etc and clearly much less of a learning curve (it would be a learning wall for a 5 year old). My intention was more that if daddy has interest, something like the lego for his child (with help) while daddy MAYBE does bits with the pi/arduino so there's a ready tutor for 4/5 years later if the childs interest takes off.:)

deleted387572
24th Sep 2015
are these worth the money? I don't K of anything about Lego but my stepson is pestering and he's 9 x
26th Sep 2015
I've just received a Lego 42043 Mercedes Truck and it was delivered in a plastic bag and the box was very damaged so I had to return it. this is the second time Asda have done this after sending in a plastic bag.