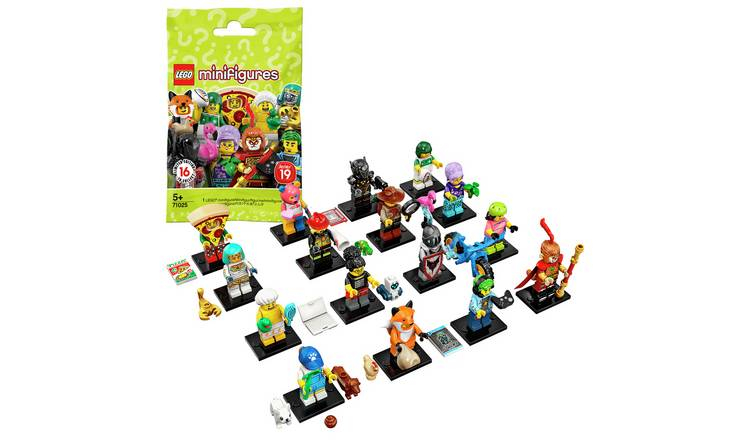 What are the 16 figures to collect? What should i feel for when feeling the packs out for a certain character? well let me tell you:

- Video Game Champ, 2x3 tile and game controller
- Shower Guy, hairbrush and duck
- Fright Knight, sword and flame, armour piece and his tail (don't just find this part though as the Fox Costume Girl has the same part)
- Monkey King, rod and 2x lightsabre hilts
- Programmer, Laptop piece (which is open and not folded when in bag)
- Mummy Queen, golden scorpions tail (don't feel just for the claws you may mistake it with the Video Game Champs controller
- Jungle Explorer, magnifying glass and chameleon and hat piece
- Fire Fighter, megaphone
- Dog Sitter, both dogs, 1x1 poo piece and the shovel
- Pizza Costume Guy, 2x3 tile and rectangular Pizza costume piece (very easy to find)
- Galactic Bounty Hunter, 2x3 sized piece with handles and his blaster pieces
- Gardener, Flamingo and stalk pieces
- Rugby Player, rugby ball and maybe his rugby hat but that's a little more difficult to identify as his
- Fox Costume Girl, chicken and tail pieces and maybe her fox helmet but would be easier to find the tail and chicken (again don't just rely on the tail as the Monkey KIng has the same part)
- Bear Costume Guy, macaroni 1x2 tile and 1x1 heart tile and the bears mask
- Mountain Biker, easiest just feel for a big bike piece and the two 2 tyres

Tips and tricks for feeling a figure packet:
- Don't bother with the torso, baseplate and head piece as they are almost always the same
- Only feel for a leg part if it is a short leg piece, skirt or hook leg etc
- Always shake the smaller parts to the bottom of the bag to make it easier, the smaller parts are easier to know which figure they belong to
- Ignore all the weird looks from strangers (or your friends and family) whiles you feel up packets, your the smart one saving money by not getting duplicates there the dumb ones for not getting it that's what I say.

I have completed this series without any surprise duplicates, i have many duplicates but all where diliberate cause of there parts and potentail value in the future. So this guide should hopefully help someone.
PostTweetShare Share with WhatsApp Share with Messenger
Community Updates
Cyber Monday 2020 DealsArgos DealsArgos discount code
If you click through or buy, retailers may pay hotukdeals some money, but this never affects which deals get posted. Find more info in our FAQs and About Us page.
New Comment Subscribe Save for later
7 Comments
28th Nov 2019
Beauty stocking fillers!
28th Nov 2019
Seems to be restricted to 3 per order.
28th Nov 2019

Seems to be restricted to 3 per order.

For order and Click and Collect but instore you can buy as many as you want from what I've experience in the past, brought 10 of these when they were £2 a few weeks back from Argos and they where fine with it dispite a 3 per order restriction online.
28th Nov 2019
It specifies 3 per order on the instore machines too.
28th Nov 2019

It specifies 3 per order on the instore machines too.

I don't use the machines i always go to the cashier
28th Nov 2019
Also the Dinsey CMFs are £1.50, as posted here hotukdeals.com/dea…738
29th Nov 2019
Thanks! I'm making my own Christmas crackers this year and these will be great to put inside.