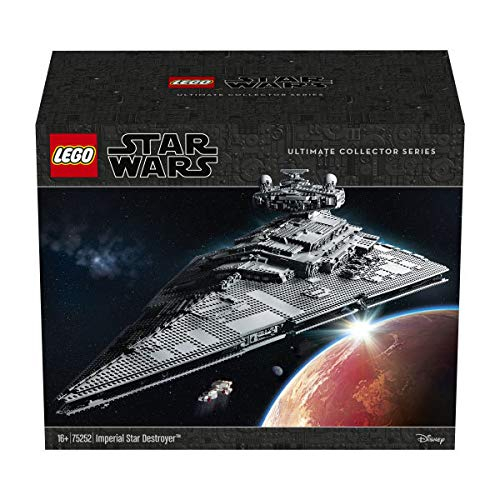 a snip at this price
PostTweetShare Share with WhatsApp Share with Messenger
Community Updates
Community support
9th Mar
An icon of the Star Wars legacy, the Imperial Star Destroyer looks just as menacing now as it did over 40 years ago. From chasing Leia and Tantive IV above Tatooine, to ominously covering Jedha City in darkness; to being ripped in half as Holdo jumped to lightspeed, there's not a moment from the series when we've not been in awe of the Empire's capital ship. So obviously we had quite high expectations of LEGO to come up with something special for this model. And as per usual, we're happy to say they delivered.

Measuring just over 1 metre long and made with over 4,700 LEGO pieces, the Ultimate Collector Series of the Imperial Star Destroyer captures all the authentic details of the starship as it appeared in the opening scene of Star Wars: A New Hope.

From its signature swivelling guns, tilting radar dishes and huge engine exhausts, to the smaller, more intricate surface detailing, LEGO has made sure this model is for true fans of the series. Plus, of course, it comes with a buildable scale version of the Rebels' Tantive IV starship to chase down.

Don't be daunted by how challenging a build this might seem either. For an epic set of this size (and being one of the largest LEGO sets ever), part of the fun comes with the experience of the build. Although you could go Han Solo on this, we quite like the idea of calling your furry friend from Kashyyyk (or wherever they reside) and building this together, reminiscing in the memories of the entire Star Wars Saga and reminding yourselves why you fell in love with the franchise in the first place.
Amazon Spain Deals
New Comment SubscribeSave for later
11 Comments
9th Mar
That's a nice model but a hefty price tag.
Edited by: "DCFC79" 9th Mar
9th Mar
My Amazon Italy one at £550 came from Bergamo! Wish I'd waited - £20 wasted.
9th Mar

What on earth are you on about?
9th Mar

But you got to enjoy it earlier!:D
9th Mar

But you got to enjoy it earlier!:D

Well you could return it and buy another, although I don’t know how postage works there.
9th Mar

What on earth are you on about?

I've opened it but could order a Spain one then return that as new, bit a faff on for £20 mind.
9th Mar

At least you have Corona now too
9th Mar

The post initially had Italy in it too...unless I’m going senile...
9th Mar

The post initially had Italy in it too...unless I’m going senile...

I thought it did right I’m cancelling my specsavers appointment