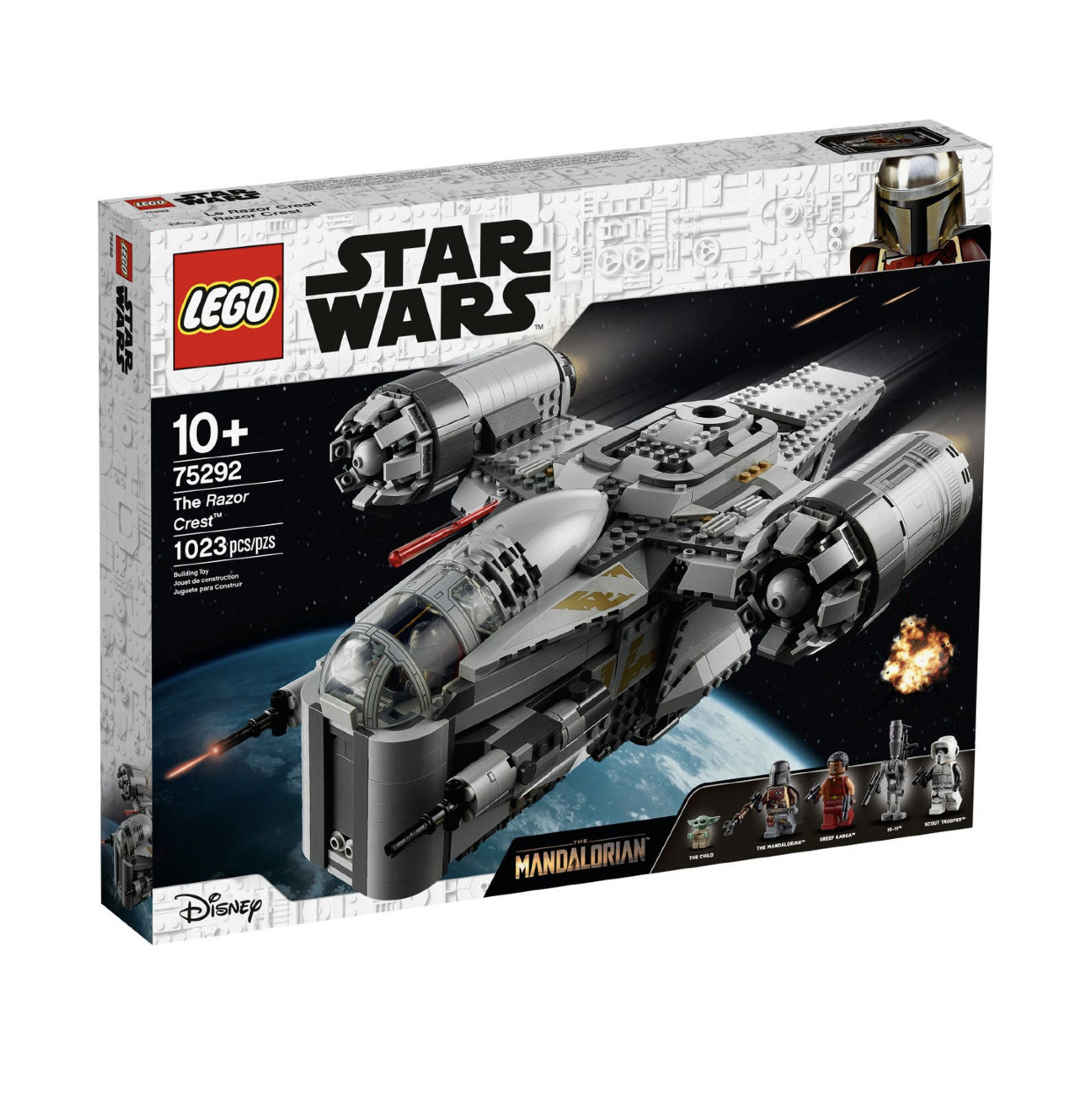 Double Lego VIP points today only + 20%cash back via TopCashBack or 3% Cash back at via Quidco.

Role-play adventures
A challenging build for ages 10 and up, this 1,023-piece starship construction kit includes 5 collectible LEGO Star Wars characters, including new-for-August-2020 The Mandalorian and the Child LEGO minifigures. It’s great for role play and combines with other LEGO Star Wars sets for even more action.

Great gift ideas
Since 1999, the LEGO Group has been recreating iconic starships, vehicles, locations and characters from the legendary Star Wars universe. LEGO Star Wars building toys are hugely popular with awesome gift ideas for all ages.
Kids can role-play as heroic warrior The Mandalorian and play out action-packed Star Wars: The Mandalorian scenes with this detailed, LEGO® brick model of The Razor Crest (75292) starship.
This fun buildable toy includes 4 LEGO® minifigures: The Mandalorian, Greef Karga, Scout Trooper and the Child, plus an IG-11 LEGO® figure, all with cool weapons to role-play exciting battles.
The Razor Crest has a dual LEGO® minifigure cockpit, 2 spring-loaded shooters, cargo hold with opening sides/access ramps and carbonite bounty elements inside, sleeping area and detachable escape pod for creative play.
This 1,023-piece construction playset offers a challenging build and combines brilliantly with other LEGO® Star Wars™ sets. It makes a super Christmas gift or birthday present for boys and girls aged 10+.
The Razor Crest dreadnought measures over 5.5” (14cm) high, 15” (38cm) long and 11” (28cm) wide. It makes an eye-catching Star Wars: The Mandalorian display piece when it is not being used to transport vital cargo!
This LEGO® Star Wars™ collectible building toy is made purely with LEGO building bricks and powered by children’s imaginations – no batteries required – so the fun, creative, playtime adventures never run out of energy!
Is your youngster new to LEGO® sets? Don’t worry. This buildable playset comes with step-by-step, illustrated instructions so they can piece together the Mandalorian dreadnought building toy with Jedi-like confidence!
LEGO® Star Wars™ building toys are the best for kids (and adult fans) to recreate scenes from the Star Wars saga, dream up their own original stories or simply display the awesome construction models.
No need to use the Force to connect or pull apart LEGO® bricks! They meet the highest industry standards to ensure a perfect, easy connection every time and consistently robust builds.
LEGO® bricks and pieces are dropped, crushed, twisted, heated and rigorously analysed so you can be sure that this Star Wars: The Mandalorian building set meets the highest safety standards.
PostTweetShare Share with WhatsApp Share with Messenger
Community Updates
Lego Shop DealsLego Shop promo code
New Comment Subscribe Save for later
56 Comments
4th May
TopCashback have 20% cash back today
4th May

TopCashback have 20% cash back today

No way! Really? Ordering another
4th May

TopCashback have 20% cash back today

Beat me to it
4th May
Ordered earlier through topcashback and swear price was £119.99 at the time.
4th May

Beat me to it

Apologies, wasn’t sure how to format. Changed.
4th May
Is this payment on order or dispatch? Anyone know?
4th May

Thanks for the promo code, fingers crossed it’s a white Mandalorian, similar to the white Boba Fett 😃
4th May

Is this payment on order or dispatch? Anyone know?

Lego immediately took payment, I paid via PayPal, could be different by card
4th May

Is this payment on order or dispatch? Anyone know?

Payment on dispatch with pre-order, or stuff on back order.

But they do "reserve" payment on your card straightaway. A charge usually appears immediately then disappeaers a few day later.
4th May

I’m tempted. Would be my first Lego set ever.

Brilliant. Thank you for that.
Edited by: "Biddy2" 4th May
4th May
It's over £100 as Lego only pay cashback on the pre-vat price.
4th May

If you use a code then the cash back will be voided
4th May
I’d be careful using that code, topcashback usually don’t honour the cashback if you use a code not on there website

Really? Never been an issue before
4th May

Really? Never been an issue before

Saw that. I’ve used codes before and got cashback paid. Fingers crossed!
Edited by: "km1405" 4th May
4th May

Saw that. I’ve used codes before and got cashback paid. Fingers crossed!

Unless it’s a Chrome Darth polybag
4th May

Unless it’s a Chrome Darth polybag

I ordered two Assembly Squares tonight. I had seen that code on here earlier but I just couldn’t take the plunge!
4th May

Too late for me lol. Not much I can do but hope. Oh well. New Harry Potter sets either way in time for my birthday!
5th May
Used the code but Cashback not tracked yet, fingers crossed 🤞
5th May

Is Assembly Square retiring soon? I've given up on Star Wars UCS so only really collecting the modulars at the moment as they are nice and easy to display and don't look out of place in our living room.

Is this the best time to snap it up?
5th May
Just my opinion but this doesnt look that much like the razor crest
5th May
Pre Order for Sept 1st, are you kidding me!
5th May

Yeah I’d say so. By time you take into account the cash back and vip. I can only see it being cheaper once, on Black Friday 2019. Not sure it will be about by that time this year
5th May
They also pulled the SW freebie set yesterday before the end of the promo - sharks!
5th May
This is the only set with baby yoda, right?
5th May
Topcashback LEGO = 4.95%
Was this a May 4th deal? If so, why post just before deal ends? Have some cold!
5th May

Pre Order for Sept 1st, are you kidding me!

No it actually states, delivery initiates September 1st.
5th May

Yes May 4th deal. With all due respect, I post when I please.
Edited by: "sinxa" 5th May
5th May

This is the only set with baby yoda, right?

Ahh, so could be anytime after Sept 1st - even worse!
5th May

This is the only set with baby yoda, right?

Correct
5th May
Hello, ive seen a lot of promotions offering free sets when you spend £50, £75 or even £100. Do you know if this set qualifies? Thanks!
5th May

Yes May 4th deal. With all due respect, I post when I please.

Well, if you post after the deal has expired it's not a deal is it? COLD!!!!!
5th May
Hi, Has anyone had their cash back tracked as of yet? Thanks