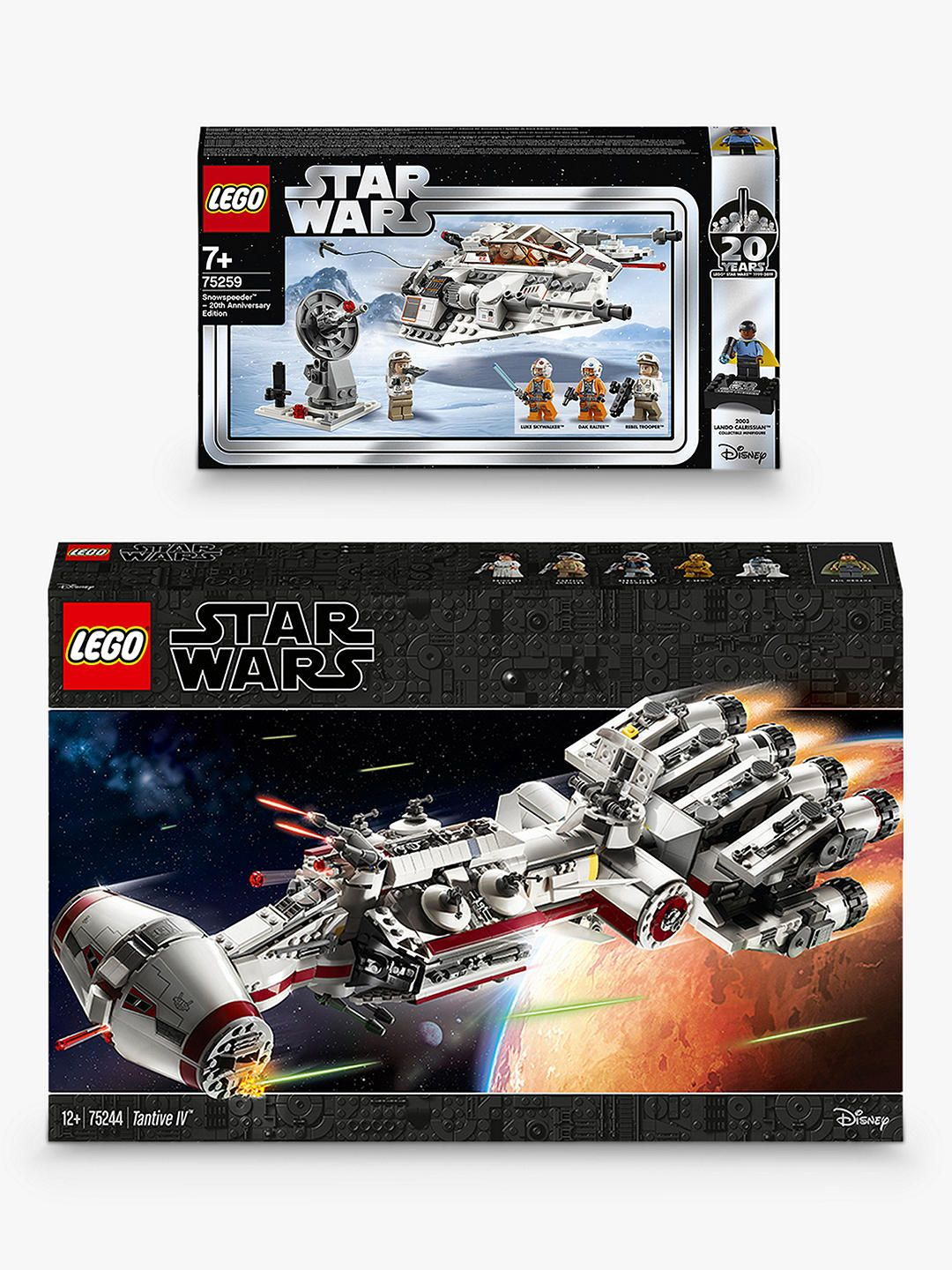 As seen flying over Tatooine being chased by Vader in the opening to A New Hope, re-create the capture of Leia and the rebels with the legendary Tantive IV spaceship.

Faithfully recreated with all of the Rebel cruiser's signature details, the model includes an elongated hull, detachable escape pods, elevating gun turrets, cargo hold and 11 massive engines at the back. Remove the hull plating to reveal a detailed 2-minifigure cockpit, conference area, weapon racks and a control console.

This special-edition set is an updated version of the original 7130 Snowspeeder model released in 1999 and features an opening cockpit with space for the Luke Skywalker and Dak Ralter minifigures in pilot suits, laser cannons, a spring-loaded shooter under each wing, plus a stud shooter and harpoon with string at the rear.

This commemorative LEGO Star Wars building toy also includes an elevating and rotating gun tower with stud shooter for epic Battle of Hoth action from Star Wars: The Empire Strikes Back, plus a bonus Lando Calrissian minifigure from 2003 on a 20th-anniversary display stand.
John Lewis & Partners DealsJohn Lewis & Partners discount code
If you click through or buy, retailers may pay hotukdeals some money, but this never affects which deals get posted. Find more info in our FAQs and About Us page.
New Comment Subscribe Save for later
19 Comments
29th Nov 2019
Bought. Think JL may have slipped up with their LSW pricing again here
29th Nov 2019
Super price
29th Nov 2019
Yes £30 off a pretty exclusive set and then throw in the speeder pretty solid deal
29th Nov 2019
Decent price and deal and it’s Star Wars lego you cant go wrong
29th Nov 2019
Anyone know how these bundles are shipping? Asking as i don't want the boxes damaged.
Edited by: "schaf" 29th Nov 2019
29th Nov 2019

I ordered the Cloud City Set earlier in the year and it shipped in an outer box and arrived undamaged. However, I’ve heard they don’t always do this and send out in bags. I’m in two minds too!
29th Nov 2019
Brilliant. Been waiting for this for ages. Great price.
29th Nov 2019
Always had in boxes so should be fine
29th Nov 2019
Ordered instantly! Great deal
29th Nov 2019

Same. Confident with JL’s shipping for everything to arrive in perfect condition (yes I know the odd few will have had a bad experience).

How much does the Tantive IV normally sell for then?

Thanks OP.
1st Dec 2019
Excellent find and ordered
1st Dec 2019
Thanks OP - ordered. Already have the Snowspeeder but no harm in having them like bookends.
1st Dec 2019
OOS
2nd Dec 2019
Cracking price if you can get one for this. I already had it and actually started the build last night. It's really good so far.
3rd Dec 2019
Ha - love it!