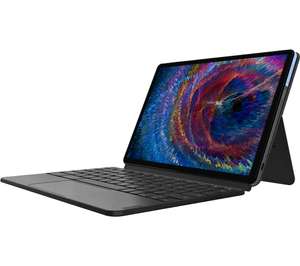 I had this on a price drop watch but I've bought a Surface Go 2 while waiting, albeit at a higher cost.

It's low end spec but a decent resolution screen, SD card for expansion, and under 1KG. The keyboard is magnetically attached but also contains a small battery so it can be used separate to the tablet/screen if you wanted a bit more space. Just be mindful for some reason they've uploaded a bunch of photos of the Chromebook version against this listing and I can't seem to manually override it - you'll see the proper ones further down the Currys page.

There aren't many ultra-portables (sub 1kg and 10" screen) around these days, the market is more geared towards iPads and Android tablets. I was using a Lenovo Duet Chromebook version previously but wanted to go back to a full Windows machine.

If you've access to Perks at Work, Reward Gateway or similar, you can probably save another 7% or so with an online voucher. Also comes with a year's subscription to Microsoft 365 so there's a few more pounds saved.
PostTweetShare Share with WhatsApp Share with Messenger
Community Updates
Top comments
22 Comments
Post a comment