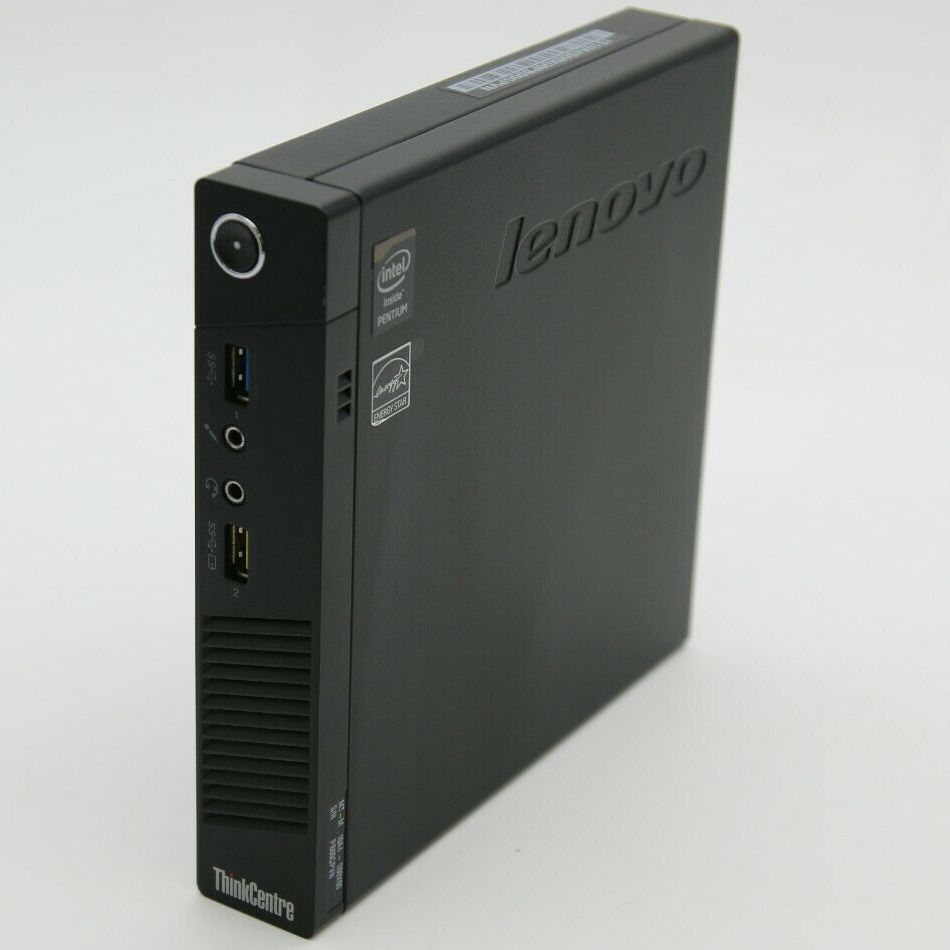 As small as a book. Can't go wrong really, especially if you are like me and bought 4. Plus there's a chance at a random discount code on eBay right now. I just logged in, a pink banner came up saying save 10% on orders of £50+ with a unique code (Mine was TTUK1**HZY5Z***, a few letters censored there)

CPU: It's Achilles heel. Not the greatest but can be upgraded.
Ram: 4GB, not too bad.
Hard drive: 320GB, non SSD but still ok.

A power cable (£7.99 on eBay, probably can get it cheaper)
A Displayport to HDMI cable (around £5 on ebay at the moment).

When you consider these were being sold by the same company with an even worse CPU for £60 (But with an OS). Not as good as the ones being sold on Itzoo a while back for £50 (but they have now upped the price massively, probably realising it was a mistake to sell that low).

Without a doubt if you just want one, buying 4 for means £29.99 each and a guaranteed profit selling the other 3 off.

With the 10% code I paid £122.14 for 4 of these including displayport to hdmi cable and power cable.

Just to clarify, this isn't new. It's classed as both B and C grade on the listing (one part says B, the other C). Which means there will/could/probably will mean marks and signs of use on the unit but "items will still be in working order".

The latter part is key. It will be completely working.

If any very unlikely problems arise, PayPal refund the cost of returning the computer.

Can you activate a fresh win 10 install with a win 7 key?? Thanks

Yes, fresh install of Win 10 with a USB key and putting in the Win 7 product key will let you through.
There should not need to be any installation of 7 first as Gavin1 suggests. I have installed and successfully activated Win 10 with Win 7 keys many, MANY times without needing to do anything else.
200 Comments
11th Mar
Can you defo upgrade the CPU here? Are they not soldered in??
11th Mar

Can you defo upgrade the CPU here? Are they not soldered in??

Uses the LGA 1150 socket so can be replaced/upgraded
11th Mar
Could be so cool once you've upgraded the CPU,ram and motherboard.

Can you defo upgrade the CPU here? Are they not soldered in??

Yep. I was having a nose comparing other cpu's as a vs.

I compared a laptops soldered in CPU to this CPU (on cpu-world I think it was). It said there the laptop CPU is non upgadable but the G3220T is.

The m93 as stock comes with 8gb ram and an i5 processor, which suggests Encore have acquired a lot of these systems, downgraded the CPU to allow them to lower the price for quick clearance.
11th Mar
No operating system, no 19volt power supply. Grade C. Items not fully function tested. No wonder it's cheap.
11th Mar
Is HDD a std 2.5" laptop drive? And guessign swapping it for a ssd is straight forward.
11th Mar

A mixed view of grades.... One part says C, but then see seller notes “B GRADE CONDITION - May have signs of use such as mark and blemished housing".

"but items will still be in working order".

They've stated it's in working order and therefore if it doesn't work in full then it could be returned as faulty goods.
11th Mar

Yes, very easy on these to swap out HDD. Picked up a couple from itzoo on the 45 deal and they were great. Not voting, but should have 'no power supply' in title
11th Mar

From what I understand, it is yes and swapping for SSD is very easy. Plenty of youtube vids taking the lenovo tiny range apart (as it could be a tad more fiddly due to the size but it's straight forward)
11th Mar

Not voting, but should have 'no power supply' in title

I put it, and put it again in description but it was edited from title before being approved.
11th Mar

Yes, fair enough - not having a pop at you, just an opinion. Video here demonstrating HDD swap. Also necessary for ram upgrade as it is below the HDD enclosure 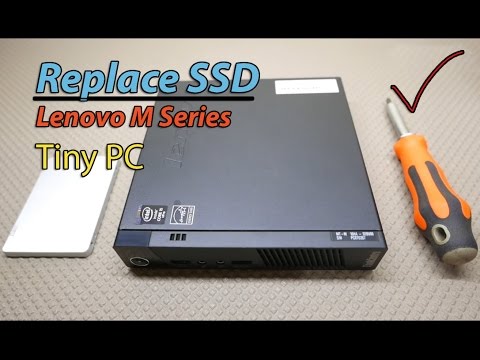 No I know, I appreciate the comments. Just honestly saying I put it in title but was edited out. TY for posting the vid
11th Mar

The IBM site also suggests they are 2014 vintage
11th Mar
See it states... COMES WITH WINDOWS 7 PRO COA, which seems if you install win7 pro it has legal key sticker. Win 7 no longer supported?
11th Mar

Ahh I see, TY. Didn't know that. Yeah, they are older systems but a very good form for portability, having as a TV box, etc.
11th Mar

"guaranteed profit selling the other 3 off." Do you work for encorepc?

I'd also have liked it to double as a Plex media server as my current Nas isn't up to it but that's a nice to have.
11th Mar

Partner likes Win 7 and as her desktop is getting a bit creaky and power hungry put a Win 7 ultimate(DAZ!) on my under used Gigabyte Brix 1900, now runs smoothly for her usage and power for 43" Tv and computer down from 150 watts to 70.
11th Mar

Yep it would. I think that's one of the main uses of these nowadays. At worst it's free returns via PayPal but it will be fine.
11th Mar

Build it as an in situ upgrade from an Installed copy of W7 OS and it should work and should validate but technically you don’t have a licence as the upgrade offer expired a long time ago. And yes Microsoft are very unlikely to care...

Hint after doing the upgrade and the box getting a key, do it again and re-install the OS as a clean install so these no W7 crud underneath
11th Mar
Anyone recommend a psu
11th Mar

Anyone recommend a psu

That's the £7.99 one as although its unbranded, feedback is decent so people haven't had problems with it.

Official ones are around £20 normally.

Almost any brand of that connector type should work as long as it's 3.5 amps. I'm sure I saw another for £4 earlier which I will have a look for now and post if I can find.
11th Mar

That can be used to authorise Windows 10 also, with a fresh install.
11th Mar

Sky sports runs like a dog on my laptop with a similar processor. I'd assumed it was the WiFi or just Sky related, hadn't considered CPU as an issue. May have to take another look.

I currently have everything but the sports working on a firestick but it's clunky (especially virgin go as the app is squashed). If this pc won't handle Sky sports I may go for an i5+ option. That would also give me the Plex server options.

Thanks for the heads up
11th Mar

I've gone …I've gone for:https://www.ebay.co.uk/itm/Adapter-For-Lenovo-ThinkCentre-M73-M93p-Tiny-in-One-23-Desktop-Power-Supply-Top/223582964247?ssPageName=STRK:MEBIDX:IT&_trksid=p2060353.m2749.l2649That's the £7.99 one as although its unbranded, feedback is decent so people haven't had problems with it.Official ones are around £20 normally. Almost any brand of that connector type should work as long as it's 3.5 amps. I'm sure I saw another for £4 earlier which I will have a look for now and post if I can find.

If you're swapping the CPU bare in mind that's going to limit your choices, perhaps look at something with a bit more headroom.
Edited by: "edd666999" 11th Mar
11th Mar
Anyone know if these have wireless built in?
11th Mar

Anyone know if these have wireless built in?

Not built in AFAIK. I think there's a radio antenna style thing that comes with the ones with it built in. Good to have a USB Wifi dongle just in case if wired isn't doable.

I could be mistaken though on the former.
11th Mar

"All storage on devices are securely data wiped" so straight to a clean install methinks.
11th Mar

I got one from itzoo for 45 as well. Mine got i3 processor which is better than this one.
11th Mar
I've bought a couple to use as Geforce now boxes, much cheaper than an Nvidia shield..
11th Mar

Yes it is but like I put, Itzoo have clearly sold it that low by undermining it's value. They didn't gauge the market and really put the stock down to an insane bargain.

The i3 tiny should easily be £100+ of which Itzoo have now changed the prices of current "tiny" systems. Someone mentioned in that deal post who contacted Itzoo said they replied saying it will never be available again at that price.

On that basis I guess the deal should be taken as regardless of what it had been previously, is this a deal at the current time? I'd like to think the answer is yes
Edited by: "Sparkz2k16" 11th Mar
11th Mar

You may find a clean install if W10 To a bare drive will not activate, so you may need to do an basic install of W7 and then do a W10 install and then a clean W10 build ie build it three time.
11th Mar

That can be used to authorise Windows 10 also, with a fresh install.

Can you activate a fresh win 10 install with a win 7 key?? Thanks
11th Mar

I agree with you. I just mentioned what I got.
Didn't down vote your deal
11th Mar

TY and I'm jealous. I was someone who almost bought it, then while thinking about it, it went OOS. Days later I posted on that deal that I'm waiting for them to have more in stock as I'm sure they would.... Nope (lol). A cracking deal that was matey
11th Mar
Sh...... nothing.... there's me posting about this deal and all along I've ordered it to my old address. Only just saw on the invoice. For some reason eBay has the default address as my old address. You lucky ladies and gents might end up with your Pc's before me (albeit I will get to the old address 50 miles away to intercept when it's dispatched).

Poop, mess, fiddlesticks and cropper.
11th Mar
DDR3 SODIMMs for RAM. If anyone has power consumption figures I'd love to know since my current tower servers are a bit hot and hungry even though they're not under much load