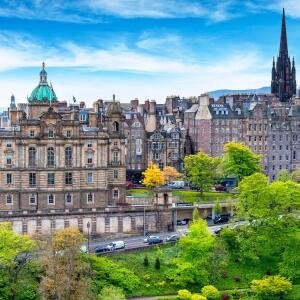 Stay for two people at the 4* Leonardo or Jurys Inn hotel with daily breakfast, and a choice of 30 locations including Edinburgh, Cheltenham, Brighton, Cardiff, Oxford (full locations listed below). Works out at £44.10 for 1 night, £80.10 for two nights or three nights for £121.50 using code LWKS10 at checkout. Availability from August up to end of March 2021 and no weekend exclusions (subject to availability). You need to purchase the voucher and then email Travelzoo@jurysinns.com to make a reservation. Please note this is 100% refundable. The next best price varies by hotel but as an example a double room with breakfast at Oxford Jurys Inn via booking.com in October is £118, so a decent saving.

Property locations included in the offer: 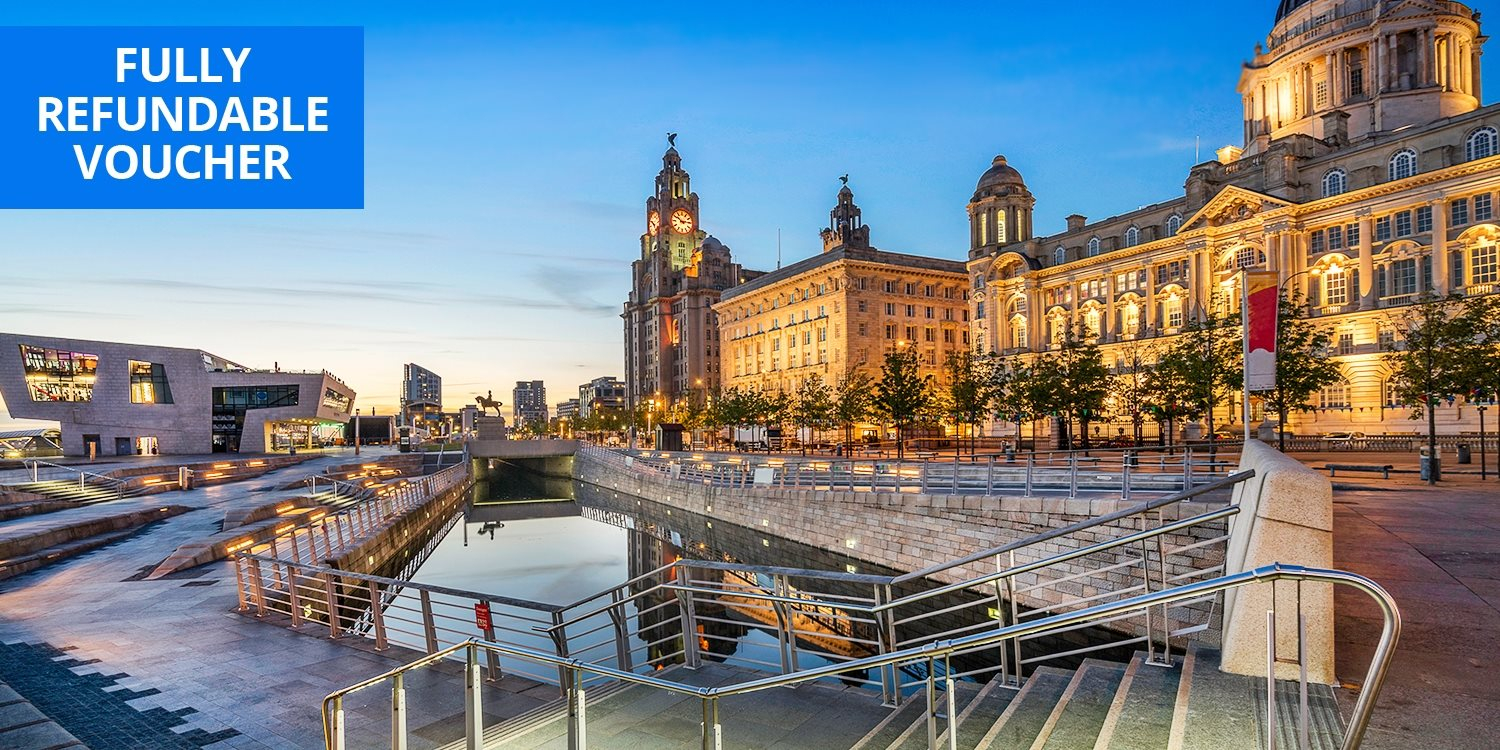 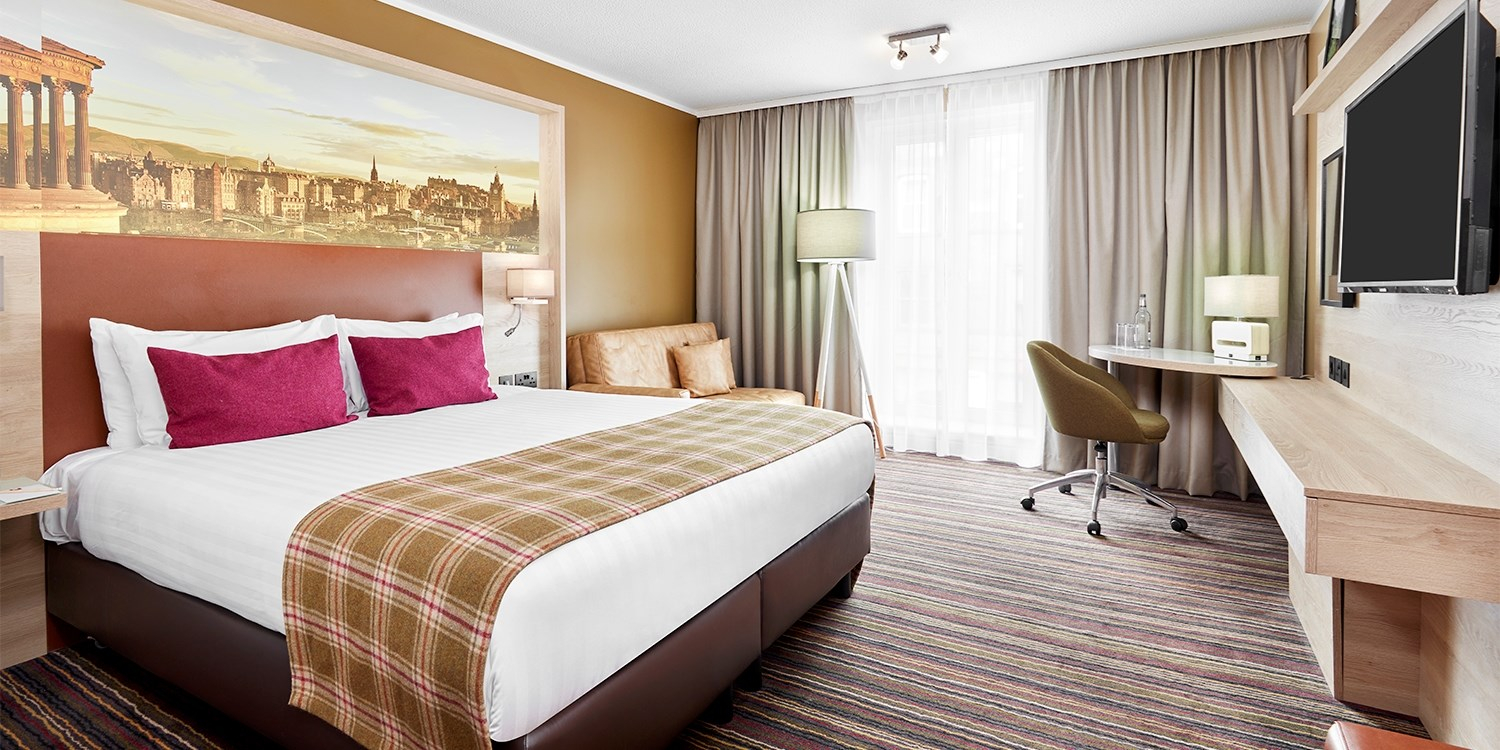 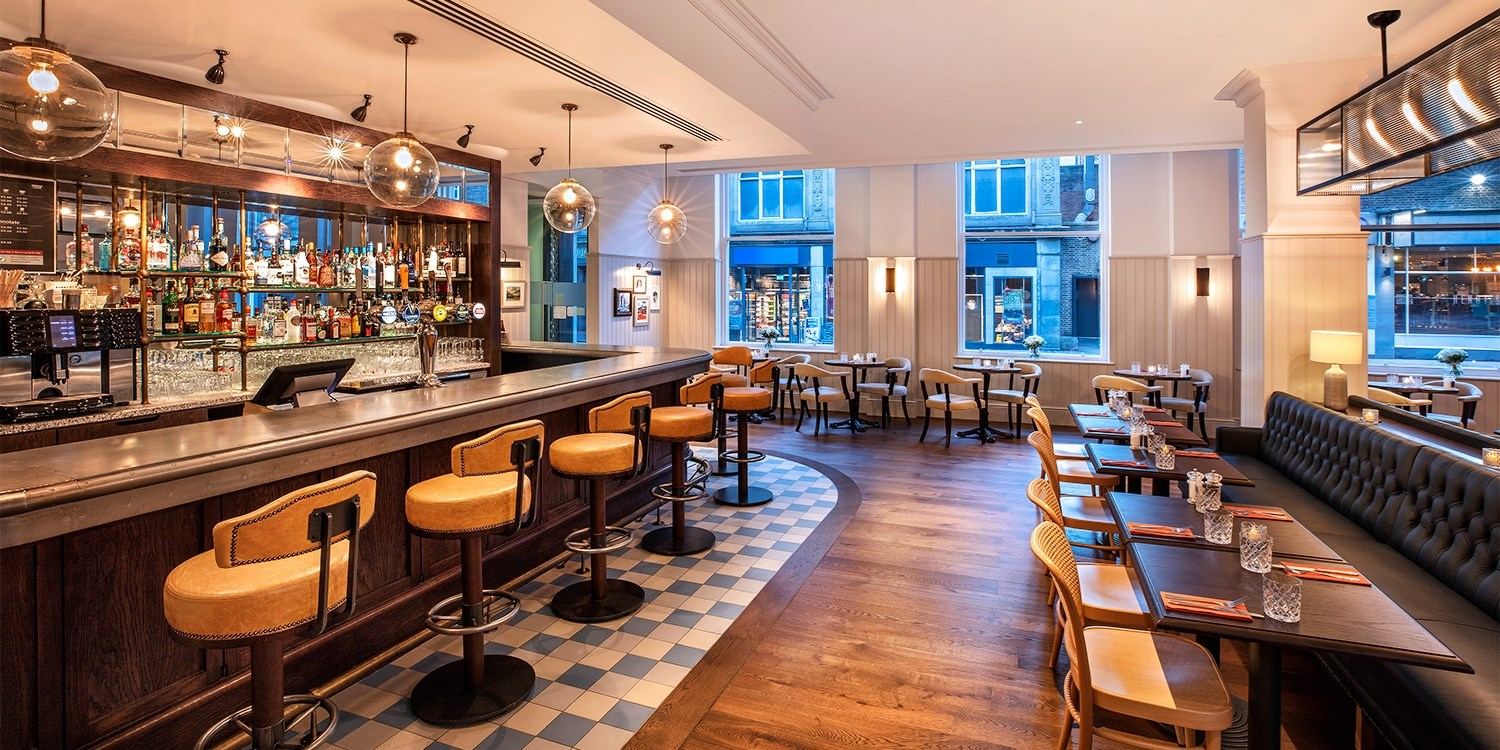 You buy the voucher and then book. Is 100% refundable so if your dates are not available you can get a refund. If you want to check date availability for the 30 locations, then to get an idea you could

a) Check the hotel sites directly for the dates you want Double Room for two - direct flexible rate
jurysinns.com/
leonardo-hotels.com/

Bias much? - Also out of all the cities i have been to in the UK Manchester is definitely one of the biggest dumps
42 Comments
6th Aug
So you need to get this without seeing availability?
6th Aug

You buy the voucher and then book. Is 100% refundable so if your dates are not available you can get a refund. If you want to check date availability for the 30 locations, then to get an idea you could

a) Check the hotel sites directly for the dates you want Double Room for two - direct flexible rate
jurysinns.com/
leonardo-hotels.com/

Looks like the Jury is still out on this one
6th Aug
I have stayed at the Jurys Inn in Edinburgh, nice enough bar the train station so close & you have the trains sitting on tracks with engines on from 2am - 5am, if a light sleeper its very loud!
6th Aug
Voted hot, really needed this fgor Edinburgh, but I go in April and this runs out in March (annoyed). Another deal posted for January, hopefullyu somebody will come up with a hotel for April too.
6th Aug

Any option for family of four ?

It states for two people, but that doesnt mean you cant have additional guests, maybe a supplement charge applies but cant see any info.
7th Aug
Does anyone know how long it should take for Jurys Inn to come back to the email?
Edited by: "natashafox67" 7th Aug
7th Aug

Mail them and ask.
7th Aug

No idea, I emailed this morning and still no reply

Mail them and ask.

No idea, I emailed this morning and still no reply :(Hahahaha

I got a reply at 3pm today after sending email at 7pm last night. They asked me a question and now waiting hours for simple reply. Such slow communication. Be aware the TravelZoo page says you can use multiple vouchers for a longer stay. You can't. . . the terms and conditions on actual voucher states one voucher one stay. Jury's Inn told us we couldn't use both.
7th Aug

Thank you for letting me know, that's quite cheeky of TravelZoo. Still a good deal for a couple of days a way though.
8th Aug
I emailed Travelzoo@jurysinns.com, it redirected the email to londonres@leonardohotels.co.uk they replied within 8 hours or so, told me there was availability but then said contact travelzoo to discuss the price if your using a voucher.

Which is bizarre because if im buying the voucher i have to email Travelzoo@jurysinns.com to book the room?!


Im confused tbh
9th Aug
Thanks booked a 3 night stay in Edinburgh with breakfast for £116 after quidco
Checked first on the company website for availability, bought voucher and emailed this afternoon.
Got conformation back within a few hours 😁

Edited by: "jarjarmustdie" 9th Aug
10th Aug
Very bad communication with jurys inn, would not recommend
10th Aug
Thanks for this, great deal.
11th Aug
I've stayed in the Leonardo Royal in St Pauls before for work. Really nice hotel with an excellent on site spa and breakfast was fantastic. Hot if the other sites have the same facilities.
11th Aug
Other than Manchester, I wouldn’t waste my time with any of those locations. Unless you’re planning a tour of the biggest dumps.
11th Aug

Bias much? - Also out of all the cities i have been to in the UK Manchester is definitely one of the biggest dumps
11th Aug

You would have to check which hotel you are looking at as there is a lot to choose from.
11th Aug
Bought this deal last week. Communication was slow so watch out if you are booking something soon, i used my gmail email address which was ignored for 24 hours. Used my Outlook email and i was replied to straight away.
11th Aug
Thanks. This is going to save me a lot of cash. Got TCB too, so even cheaper.
11th Aug
Anyone know how much is child supplement please .
When I tried to book for 2 adult and 1 child (5) I got this response.

Please be advised we only cater 2 adults for the travelzoo voucher.
Edited by: "sheebs" 11th Aug
12th Aug
To confirm, voucher valid only for 2 adults and cannot use with any supplementary charges for children
13th Aug
My experience so far:
The booking process is tedious. I'm currently on day three of asking for available dates. They only answer one email a day, in the evening, with one line responses. They don't say when they're available, just when they're not available.
The lack of initiative from the bookings team make me want to get a refund for the voucher. I'm giving them one more day before I do.


A friend of mine booked and had a much smoother response from a different person to the three people I've received emails from.
15th Aug
Looking to book this for Edinburgh. I'm probably being stupid, how do I book it? I'm on Travelzoo's site and it keeps telling me to purchase via the continue button.... but there isn't one. Also I'm looking to go up with the in-laws, does anyone know if you're able to buy and use multiple vouchers?
Edited by: "Robert_Frost" 15th Aug
17th Aug 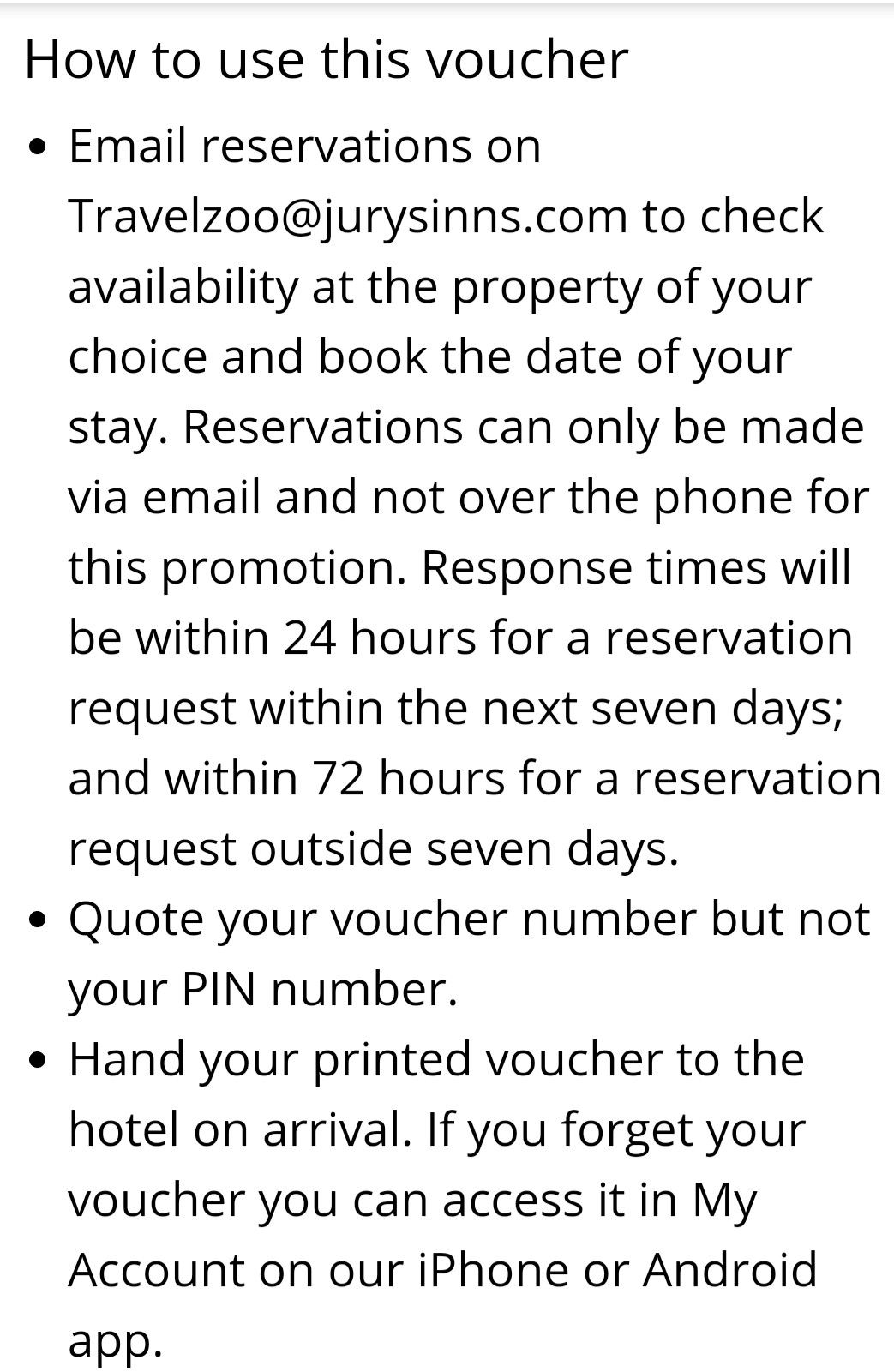 You would be better off just phoning the hotel you want to book to check availability, if they have your dates you can buy the travelzoo voucher online which is instant.
19th Aug
i already bought the voucher. availability online was good, (december) just email response slow
19th Aug

I booked the Brighton Jurys Inn one for family last week, I ended up just calling the hotel to book and use the voucher as found the email responses too slow.
19th Aug
Anyone else found the customer service incredibly slow and frustrating. I email a question, wait days for a response that doesn't answer the question. Never the same rep, if a date isn't available they don't give you one that it. So annoying
19th Aug
Is there any parking around here
22nd Aug

I tried phoning the hotel (Liverpool) and was told they didn't deal with the offer.
Ive been waiting well over a week for a response to my third email. As yet, they've not told me any availability, so I just got fed up and got a refund. The refund was quicker than their booking process.
22nd Aug
i waited a week and had no response to my email, sent another and still waiting for a reply. il give them another week before i request a refund.
so much for a reply within 72 hours.
they should have just issued a voucher code so you could book on jurys website
24th Aug
Excellent price for a 2 night stay in Edinburgh which includes breakfast. You will need to use the code LWKS10 at checkout.

About the hotel location: 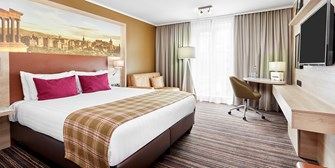