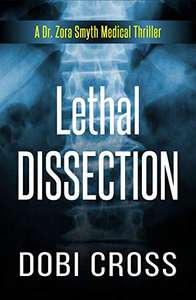 A murder suspect for the dead body on her table, surgeon-to-be Zora Smyth races to find the truth. Then more bodies drop ... Who will win? The spunky medical student or the killer who will stop at nothing to achieve his goals?

Zora Smyth is not your average poster child for a first year medical student with a distant mother, a missing sister, and a deep distrust of the police.

All she'd ever dreamed of was to make it through medical school and become a surgeon. But a dissection gone wrong at the Gross Anatomy lab lands her in the middle of a murder investigation and in the crosshairs of an enemy set on burying her with murders.

When a potential witness points her out as the main suspect for the murder, and more bodies begin to drop, Zora faces a frightening risk of losing her dream and her freedom.

As she races to investigate the truth and save herself, Zora faces off against a killer who is hell-bent on getting what he wants. Will Zora give in to the enemy determined to make her take the fall, or will she fight for her life as she faces her worst nightmare?
PostTweetShare Share with WhatsApp Share with Messenger
Community Updates
2 Comments
Post a comment