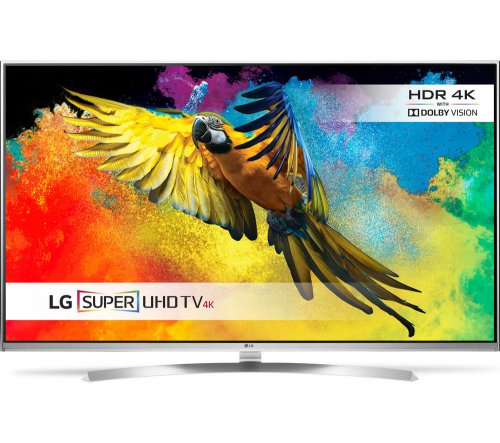 I got this tv a few weeks back at £835 so this is a steal .... I've just sold my samsung tv from my bedroom and bought a 2nd one of these, i've been that impressed with it as an all rounder. One of the main things to take into consideration is that the 3d on the tv is very good, and with all the major manufcturers dropping it ... this is just about your last chance at a shop bought 3d tv that's recent. But, don't just dismiss it because its 3d .. theres so much more in this set. Best thing i've seen in a long time is web os3, LG's android front end. I confirm it does x264 and x265 if you want to playback .mkv etc. The biggest debate in the past on this tv is whether the panel is 8 or 10 bit.. its 10 but in the 8+2 bit (dither) format. Ive still got a decent samsung curved soundbar from my previous tv, and not needed to use it once .. the audio is by Harman Kardon and stands up really well, much much better than I expected.

Release price on this tv last year was an eyewatering 1800 quid!

PostTweetShare Share with WhatsApp Share with Messenger
Community Updates
Currys PC World DealsCurrys PC World discount code
If you click through or buy, retailers may pay hotukdeals some money, but this never affects which deals get posted. Find more info in our FAQs and About Us page.
New Comment Subscribe Save for later
56 Comments
27th Apr 2017
was £899 for most of last year until they put it up to £1099 a month before Easter, still hot
27th Apr 2017

What is the stand width on this. Does anyone know?

just measured mine at 85 cm

Did you order?? Did that code work as tried and failed.

It did work. But now crossing my fingers to see if the order is dispatched today...
27th Apr 2017

Hi yes went through this morning and comes up with code invalid.
27th Apr 2017
Just been on to customer services, this offer with the discount ended last night gutted. Glad whom ever ordered this early, you were very lucky great deal.
27th Apr 2017

thats annoying but i'm pleased I got it, mega lucky as I only spotted it about 11.40 last night. the 50 off version of the code says it still has 6 days to run so all is not lost, I'll amend the post
27th Apr 2017
Just a warning for those wanting to pick up the last of the 3D sets on the cheap. I had the last years version for a week and the 3D is excellent for 75% of the image with bad ghosting on either the top 25% or bottom 25% depending on your vertical viewing position. I returned my set for this reason and then looked at many others which all suffered exactly the same. This years version also has exactly the same issue when I've viewed it in store.

I've now gone for the OLED C6 which doesn't have this issue whatsoever. If you want the best 3D TV, this is your cheapest bet.

Surprised this isn't hotter. If you want a HDR and Dolby capable 4k TV with decent passive 3d there isn't any other option other than LGs C6 oled which is twice the price.

Maybe people automatically assuming this is an rgbw set just because it's IPS.

I knew about the banding issues in the football, as the 1st of the 2 I bought I got about a month ago. Ive just watched the Newcastle vs Cardiff game with a friend and for me its noticable, for him it wasn't. So i'm assuming some people are more sensitive than others etc. Its certainly for me not a dealbreaker otherwise I wouldn't of got the 2nd one. I think tho for some people it might well be. Overall though, the picture quality is very very good. The youtube 4k demos are brilliant on this tv, I find that normal tv gets upscaled very well. SD performance is certainly acceptable, and to me seems a lot better than previous LG sets I considered when I bought my last 'round' of TV's for the house about 3 years ago. (I tend to sell them off before they lose too much value and then buy a year old model tv like this one).
Edited by: "zoopakev" 28th Apr 2017
28th Apr 2017

Assuming you bought online, then yes buy another now and then return unopened within 21days of first TV purchase
Edited by: "MrKrabs" 28th Apr 2017
28th Apr 2017

I just bought this evening with LSTV75A code too so definitely still looks valid
29th Apr 2017
Are the vouchers codes for Currys? Can you use them in-store or with Reserve & Collect?

My main concern with Currys is the returns if there's issues with the television, I'm not sure where people are buying TVs and returning them when their not happy with clouding and flash-lighting?
29th Apr 2017
Ordered. £75 voucher worked fine,
Bought £700 giftcards for £644 using perkbox then remaining £24 on amex making total a bargain £668, less if quidco tracks!

Buy online and have it delivered, you have more rights.
30th Apr 2017
Got mine delivered on Friday and so far I am very impressed!
30th Apr 2017
Mine arrived at 9.00am, glad I didn't pay extra for delivery. Can't set it up yet, got a crazy 2 year old jumping around.
30th Apr 2017
Same here. Setup was very easy. Really pleased with how it looks. The SD picture isn't good so I will have to check the settings. Now I need to find a decent wall bracket for it...
30th Apr 2017
Mines all setup. After reading through the AV forums link I was worried about banding, backlight bleed and ghosting in 3d.

Needn't have worried. Its spectacular. Spent a good 30 minutes getting all the options dialed in before watching something properly. Even SD is nice and sharp - the upscaler is light years ahead of my old sony 40v4000 (only realised today its about 9 years old!), blacks were grey on that, but they seem pretty damn good to me. Absolutely no back light bleed (although true test will be when its dark), no visible banding in F1. HD looks fantastic too.

Tried finding dory in 3d, jaw dropping, even better than I remember what toy story 3d looked like at cinema a few years ago, daughter was wowed by it. Why manufacturers have abandoned 3d now is beyond me, forget those attempts on 1080p sets, this is far far better). Now got about 10 films downloading from Sky and several 3d blu rays in my amazon basket.

Haven't had chance to try HDR or my xbox s yet, might be a good excuse to finally download that mass effect andromeda trial.

Didn't think this level of quality was possible for under £700, for those who had been on the fence over 4k, HDR for last 18 months and still rocking an older 1080 set, I can highly recommend this.
30th Apr 2017
Thinking of getting this tv....can anyone confirm it has the app Smart IPTV in the lg app section? Thanks
30th Apr 2017

Yes there is, it's first app listed in fact!

Hooked up my old cheapo sound bar via optical and the sound is a few ms out compared to the tv sound creating an echo. There's an option to alter audio delay but this seems to adjust both TV and optical, I just want to adjust optical but can't see a way. Not a huge problem, sound bar doesn't seem much of an improvement on built in sound anyway.
30th Apr 2017
dunno if anyone else who has bought this, can confirm this .... the bl**dy remote will not stay on my couch ... always ends up sliding onto the floor! I think its something to do with the shiny blackness and friction co-efficient ...