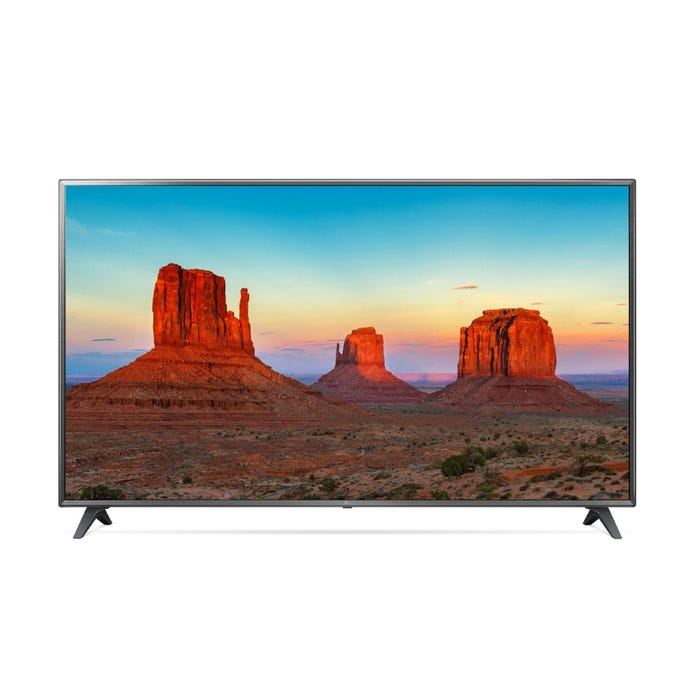 A big screen bargain from a top brand – this LG 75 inch TV supersizes your home entertainment.

A bigger screen for less
Nothing beats the visual thrill of a big screen and, with this LG you get a whopping 75 inch screen for the price of most 55 or 65 inch TVs. The bigger screen is ideal for larger rooms and immerses you in the action in ways that smaller screens can’t hope to match.

Active HDR for wide ranging HDR support
As well as offering a jumbo screen, this 75" LG TV also offers the picture quality to match. Active HDR covers a range of formats, including HDR10 and HLG. HDR10 is widely used on UHD gaming consoles from Sony and Microsoft. HLG (Hybrid Log Gamma HDR) is a broadcast and user generated standard format that is set to become the standard for transmitting 4K signals.

4K Ultra HD TV - Ultimate Detail
Thanks to 4K UHD screen resolution, this LG 75 inch TV offers stunning realism. The resolution is four times greater than the more conventional 1920 x 1080 Full HD TVs and it's a difference you can see clearly on this mighty LG 75 inch TV. Thanks to LG's 4K Resolution Upscaler, even standard FHD signals can be upscaled to near 4K clarity and detail - giving your Blu-rays a new lease of life. Whatever the resolution, the LG's big screen always impresses.

All your favourite apps
This LG comes packed with useful apps that look great on the big screen. Netflix 4K is covered. There’s also Amazon with UHD HDR and YouTube in 4K. The main channels are all covered, plus there’s access to Now TV and the Sky Store. You also get easy access to music sites like Spotify and Napster plus social sites Facebook and Twitter.

Freeview Play makes catch-up TV easy
Find programmes from BBC iPlayer, the ITV Hub, All4 and Demand 5 sitting alongside over 60TV Channels and up to 15 HD channels. Simply scroll back in your TV guide to watch shows you missed from the last 7 days. Just make sure your TV is connected to the Internet and you're good to go.
PostTweetShare Share with WhatsApp Share with Messenger
Community Updates
Richer Sounds DealsRicher Sounds Discount Codes
If you click through or buy, retailers may pay hotukdeals some money, but this never affects which deals get posted. Find more info in our FAQs and About Us page.
New Comment Subscribe Save for later
Top comments
30th Dec 2019

At this price, imo it cannot be beaten for a 75". Lovely slim bezel, looks nice and the HDR is surprisingly good (even for a budget/mid-range panel). I have a mate who uses this telly and once the settings are tweaked correctly, there is plenty of colour and the reds look like reds and the blues are stunning. Only downside is the black levels could do with a being notch lower... but it's not OLED end of the day

LG also seem spot on with firmware upgrades too if that matters to you.

Also is the guarantee with richer sounds or direct with LG?
29th Dec 2019

At this price, imo it cannot be beaten for a 75". Lovely slim bezel, looks nice and the HDR is surprisingly good (even for a budget/mid-range panel). I have a mate who uses this telly and once the settings are tweaked correctly, there is plenty of colour and the reds look like reds and the blues are stunning. Only downside is the black levels could do with a being notch lower... but it's not OLED end of the day

LG also seem spot on with firmware upgrades too if that matters to you.

A word advice would be to disable ECO mode & use standard and tweak settings from there in order to get the best possible results you are comfortable with
Edited by: "merb0786" 30th Dec 2019
30th Dec 2019
Outrageous value for money. Great find.
30th Dec 2019
I've had this TV for around 4 months from Richer Sounds & for the £900 I paid I thought it was money very well spent, at this price it is a genuine bargain! The 4k HDR is excellent and the web interface is very fast and responsive with all the popular apps including Netflix & Amazon.
30th Dec 2019

Nice one. Good to hear your experience with this TV has been positive mate.
30th Dec 2019
50hz panel. Any idea if this is any good at this screen size. Thanks
30th Dec 2019

50hz panel. Any idea if this is any good at this screen size. Thanks

I just ordered the John Lewis Samsung today and they price matched no bother, or I would have went for this one!
30th Dec 2019

I had it price matched a couple days ago but I held off to see if anything else pops up.
I went with this Lg deal.

On a side note, you may want to check out that thread again as someone mentioned theres issues with default app storage space which has been causing a big hoo haa with many users. They posted a link as well.
Edited by: "Dan__" 30th Dec 2019
30th Dec 2019

Thanks Dan, I’ve previously had issues with LG’s customer services with two tv’s in the past and I have a 65” Sony Bravia OLED, but wanted this mainly for gaming and movies in the big boys room , and I believe the issues previously with the Samsung where sorted for the 2019 models and a rooted USB port on this model!

Voted hot. I have Currys vouchers . Don't know if they will price match

Don’t think it affects this model my mate got one and said that the space was 3gb
30th Dec 2019
Would you say this LG is better than the Samsung UE75RU7020 which is samsungs budget model?
I cnan get the samsung with employee discount for the same price but undecided between the 2

Another option..... LG 75UM7000PLA. Get Richersounds to price match Currys, same price.
Only differences appear to be motion processing and this 7000 model is compatible with Amazon google apple etc....
another option mate
30th Dec 2019
Thanks buddy I'll take a look.

Do you think the Samsung UE75RU7020 is a decent panel?

I think it will be good yes. Either one to be fair will probably perform the same in all honesty.

I’ve been looking at all sorts, but rather than spend a couple of grand right now I’m looking at this one for a bit more: LG 75UM7600PLB. (£1,200)
This is better than both previous options, more HDMI, magic remote, slightly better spec.

If you are set on Samsung then for the money go for it. I’ve no hands on experience with either, but a 75” for that money you can’t really go wrong. Just don’t expect the best for fast Xbox gaming for example, but it won’t be bad either
30th Dec 2019
Bought!

I had to get Saturday delivery as I'm going to be away next few mon-fridays.
Worth it tho.
30th Dec 2019

Anyone else have an opinion on this

This a lower LG model Size over picture Quality? if u no like decorating will look ok on large Wall no Magic remote or Nano Cell or Hdmi 2.1 or Dolby Vision better 65 inch TVs around Similar price the old saying Bigger Better
30th Dec 2019

You don't need a rubbish dongle or a wire to stream from iPhone or Macbook. Really good that I can sit on my bed, get my laptop out and put up videos or documentation on the TV, work on both TV and laptop with just one button.
Edited by: "trojanh" 30th Dec 2019
30th Dec 2019
Nice one
30th Dec 2019

Ahh so screen mirroring
30th Dec 2019
No Dolby Vision is a deal breaker for me personally.

Still think it is a decent budget 75 inch TV So heat.

Got a feeling there are going to be some great TV deals on here next year.Micro LED will be a game changer when it does eventually hit the market.Meaning there will be a lot of good spec older model TVs hitting the market. CES soon, going to be interesting to see what is coming next year.

You're looking at 10 years before micro-led is affordable, still got a few years until OLED is affordable to the majority of people.