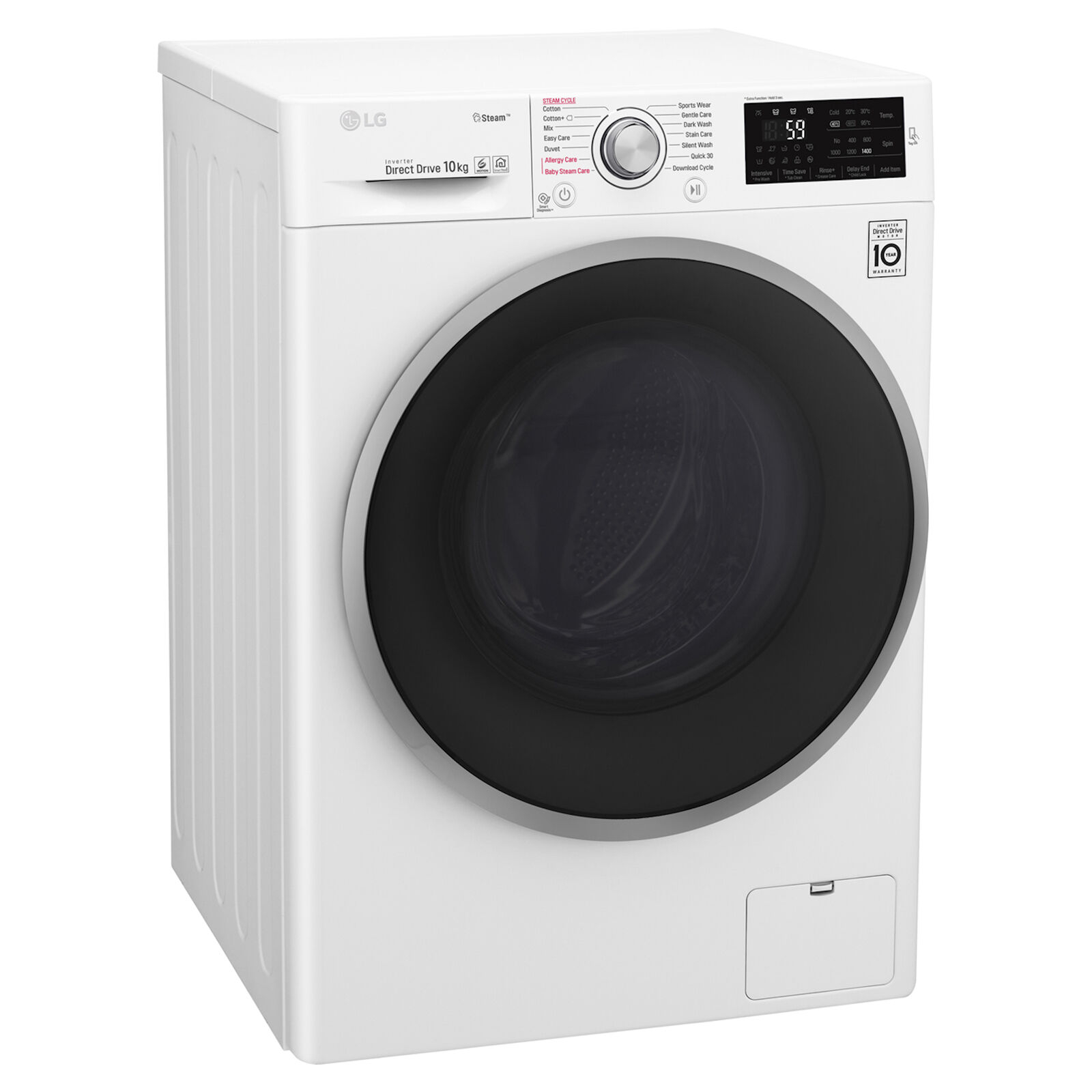 99.9% Allergy Care The allergy care cycle uses water and heat to create a super-disinfecting steam that sanitises clothing and removes up to 99.9% of allergens whilst still being gentle. Awarded the British Allergy Foundation Seal of Approval, it's the perfect choice.

The Inverter Direct Drive Motor that powers our washing machines is super reliable and really quiet. Providing long-lasting performance, our machines come with a standard 10year warranty on the motor.

Pause & Add Items" allows you to add the items to the wash without having to wait until the cycle finishes. Simply press ‘Pause’ and wait for the cycle to stop, the door will open* within about 3 seconds** then add in your items, anything from small socks to a big jacket. Never forget a thing to wash again.

Extend your guarantee to 5 years at no extra charge when you buy and register this product. Redemption is required within 28 days of purchase through lg.com/uk
PostTweetShare Share with WhatsApp Share with Messenger
Community Updates
EBay DealsEBay discount code
If you click through or buy, retailers may pay hotukdeals some money, but this never affects which deals get posted. Find more info in our FAQs and About Us page.
New Comment Subscribe Save for later
Top comments
18th Nov 2019
Got the 9KG machine, good washing machine, word of warning, LG will take around four months to confirm your five years guarantee.

Also make sure you take screen shots of the purchase when buying from eBay, happened to me, as they needed to confirm it was brand new and not second hand, this includes Hughes Direct as I purchased it from that seller.
18th Nov 2019
very poor customer service,nothing but lies,i'm still waiting for the 5 year warranty confirmation since JUNE !!! online shows my warranty as 24 months only. i will never buy anything LG again
24 Comments
18th Nov 2019
Got the 9KG machine, good washing machine, word of warning, LG will take around four months to confirm your five years guarantee.

Also make sure you take screen shots of the purchase when buying from eBay, happened to me, as they needed to confirm it was brand new and not second hand, this includes Hughes Direct as I purchased it from that seller.
18th Nov 2019
Hot for the brand, price and especially for the warranty.
18th Nov 2019
What was your total cost including del, installation and recycling of old machine?
Still researching for one, why oh why is it so hard to decide on a washing machine?!!
18th Nov 2019
Be careful when buying LG, our washing machine broke and was deemed a write off. Took over 2 months for them to replace it. The machine was only 7 months old. Wouldn't buy LG ever again.
18th Nov 2019
very poor customer service,nothing but lies,i'm still waiting for the 5 year warranty confirmation since JUNE !!! online shows my warranty as 24 months only. i will never buy anything LG again
19th Nov 2019

It took around 4/5 months for them to eventually confirm mine, they claimed to sent confirmation by post twice and in the end sent it via email, i had to email them around 3/4 times for that to happen over 4/5 month period. Does not give me much confidence in them, i only bought it because of the warranty so wanted proof from them, based on customer service alone i wouldn't buy LG again.
19th Nov 2019

Yep same thing happened to me, just like the previous post, I had to contact them numerous time before I was "awarded" the five years guarantee.

I contacted them a month later via their chat system after I bought the machine in July and was informed they had a lot of people applying for the five years guarantee and I had to wait, so I did.

2/3 weeks later I was sent an email to send proof of purchase even though I sent print screen of this via their website, so I sent this again via email, received an email the next day advise they are processing this a team member will be in touch in the next 24/48 hours, again no such contact, so i contacted them a week later via email to find out what was happening they advise me that they are still processing this, I asked them about the previous email and all I got was an apology and no real reason why.

Another month pass an no word so I contacted them via phone, took around 30 mins eventually I was advised that I was awarded the five years guarantee and will receive this via post, nothing for about two weeks called again and this time was advise they will send this via email, after two days I received a copy of a PDF to confirm my five years guarantee.

I don't understand why they would make customers go though all these hoops, if they are so confident why don't they just give five years guarantee when the machine was purchased?

P.S just checked and on the website it still states 24 months parts & labour.
Edited by: "Roujin-sei" 19th Nov 2019
20th Nov 2019
I’ve never really bought anything LG that’s been perfect yet. My American style fridge freezer buzzes, my LG phone shorted out and refused to switch on, and my LG OLED TV has yellow banding at the bottom. I’ll avoid LG stuff from now on
20th Nov 2019
Got same model. So far been brilliant. Using it at least twice a we had baby not long ago. Only downside is downloading more washing programmes. Washing machine will only storage one at time and your phone needs to have NFC to connect
20th Nov 2019
I bought the 9kg model a few months ago - the drum is small and I wish I had bought the 10kg model (although it was a lot more expensive at the time).

It's an ok machine if you're clothes don't have stains. If they have stains then you either need to pre treat or use an intensive cycle as the 1 hour cycle doesn't get stains out.

Warranty took four months to be confirmed as mentioned earlier. The seal came off the machine and someone came out within 2 days of me calling so for me the after care service was fast and effective.
20th Nov 2019
Their white good division has given me genuinely the worst customer service of any big brand I've ever dealt with. I have their 9kg washing machine, and the door kept breaking. The problem was with the machine's hinge mechanism, but rather than replace the machine, they kept replacing the door. The engineers were even backing me up whilst replacing the door each time, but LG were having none of it.

After they replaced the fourth door, they told me they wouldn't do any more work on it. I was shoved between LG and Currys (despite it being LG's responsibility), and in the end, Currys just replaced the entire machine for me, which they didn't have to do, which made them a fantastic company to deal with in comparison.

Since I got the replacement machine, no problems whatsoever, LG were wrong.

If the machine works solidly for its entire warranty period, you'll be fine. If it goes wrong though, be ready to go to war with LG...
20th Nov 2019
I got this washing machine and it's very good. Just remember the steam cycles can take 4-5 hrs on a full load! It's the delivery drivers that are very poor though if it comes directly from LG.
20th Nov 2019

Don't the council collect large white goods for free? I think the 1st item they collect is free otherwise can I take it to recycling for free in my SUV?
20th Nov 2019
Excellent washer. I've got the 8kg and cost more than this. Just replaced the older model which lasted 9.5 years. I was always overloading too. The drive went in the end. I couldn't find my warranty but they had it all on record.
20th Nov 2019

The deal that I got with AO included recycling of the old washing machine, sorry.
20th Nov 2019

Have you needed to use the warranty? I'm confused.

not yet although the machine did leak once only,if it happens again i will contact LG
20th Nov 2019
The image has a sticker that says 10 year warranty
21st Nov 2019

The image has a sticker that says 10 year warranty

For the drive motor only.
21st Nov 2019
In contrast to others on this thread, the 5 year guarantee on my 9kg LG machine was confirmed in about 2 weeks with no issues at all. Not needed to use the warranty (machine is 2 years old now), but both my wife and i have needed to use the warranties on our smartphones, and LG provided the best warranty service we've experienced and everything was fixed with no bother at all.

Samsung on the other hand were a nightmare for our American-style fridge freezer when that packed up after less than a year.
21st Nov 2019
what about hotpoint and hoover? they always seems good prices, are they worth it per say? who even makes them or they have own factory
21st Nov 2019
There is a few LG deals on eBay with 75 off .. which one do you guys think is the best value for money under 375 pounds after discount ?

4 people will be using it , no kids,4 adults working professionals.

Go for the cheapest LG 10kg washing machine you can find with 5 year guarantee.

I find the 9kg LG drum small. Even though the capacity states 9kg I don't think I have ever managed to squeeze in more than 4kg of dry clothes!
Edited by: "pototea" 22nd Nov 2019
1st Dec 2019
Hi all

Do you expect the prize20 codes back anytime soon ?

Does eBay do these often ?