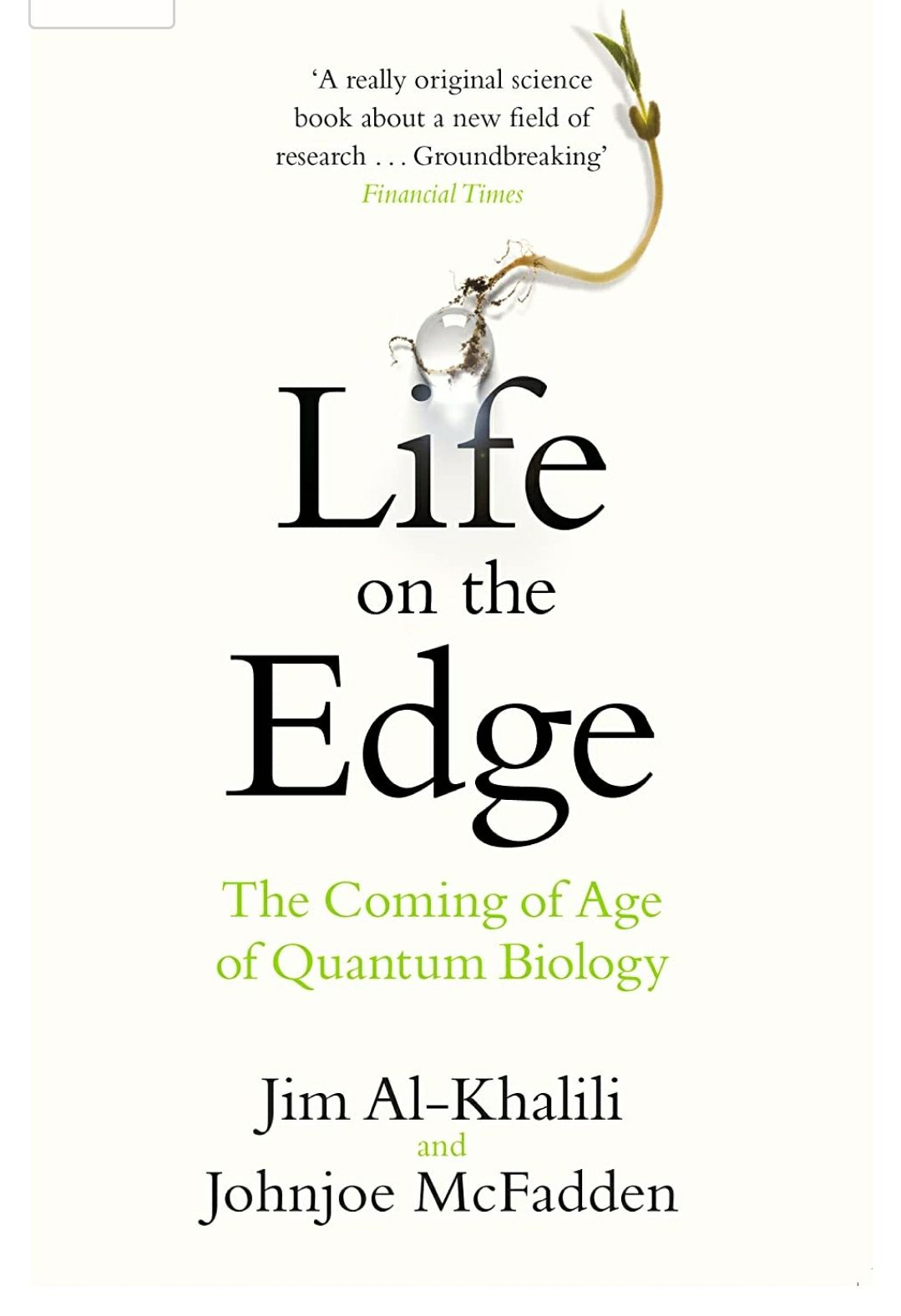 One of my favourite scientists - this book looks brilliant.

Life is the most extraordinary phenomenon in the known universe; but how does it work? Even in this age of cloning and synthetic biology, the remarkable truth remains: nobody has ever made anything living entirely out of dead material. Life remains the only way to make life. Are we missing a vital ingredient in its creation?

Like Richard Dawkins' The Selfish Gene, which provided a new perspective on evolution, Life on the Edge alters our understanding of life's dynamics as Jim Al-Khalili and Johnjoe Macfadden reveal the hitherto missing ingredient to be quantum mechanics. Drawing on recent ground-breaking experiments around the world, they show how photosynthesis relies on subatomic particles existing in many places at once, while inside enzymes, those workhorses of life that make every molecule within our cells, particles vanish from one point in space and instantly materialize in another.

Each chapter in Life on the Edge opens with an engaging example that illustrates one of life’s puzzles – How do migrating birds know where to go? How do we really smell the scent of a rose? How do our genes manage to copy themselves with such precision? – and then reveals how quantum mechanics delivers its answer. Guiding the reader through the maze of rapidly unfolding discovery, Al-Khalili and McFadden communicate vividly the excitement of this explosive new field of quantum biology, with its potentially revolutionary applications, and also offer insights into the biggest puzzle of all: what is life?

"Remarkable...Life on the Edge is a fascinating and thought-provoking book that combines solid science, reasonable extrapolation from the known into the unknown, and plausible speculation to give an accessible overview of a revolutionary transformation in our understanding of the living world." --Wall Street Journal

"The elemental provocation of the book lies in the authors' ability to make the complex conceivable... McFadden and Al-Khalili give sure footing to the anything-goes bafflement of quantum theory." --Kirkus Reviews

"McFadden and Al-Khalili draw readers into a revolutionary new paradigm. . . An intellectually exhilarating visit to the baffling frontiers of science!" --Booklist [starred]

"The book elegantly opens up a new way of looking at nature." --The Independent; "Books of the Year"

"A really original science book about a new field of research ... Groundbreaking." --Financial Times, "Books of the Year"

"Coherence is just one of the complex phenomena that Jim Al-Khalili and Johnjoe McFadden set out to teach the reader. They succeed by using delightfully revealing analogies and similes, some borrowed from their prior work, that make slippery concepts sit still for study." --The Economist

"Hugely ambitious ... the skill of the writing provides the uplift to keep us aloft as we fly through the strange and spectacular terra incognita of genuinely new science." --The Times (UK)

"This thrilling book is an overview of a field that barely exists ... Al-Khalili has a genius for illustrating complex ideas via imaginative sidetracks." --The Sunday Telegraph

"The great virtue of this book is its thesis - it sets out a clear and enthusiastic argument for the importance of quantum biology." --New Scientist

"Life on the Edge gives the clearest account I've ever read of the possible ways in which the very small events of the quantum world can affect the world of middle-sized living creatures like us. With great vividness and clarity it shows how our world is tinged, even saturated, with the weirdness of the quantum." --Philip Pullman

"This illuminating account of an important new field is a wonderfully educative read." --A C Grayling
PostTweetShare Share with WhatsApp Share with Messenger
Community Updates
Amazon DealsAmazon discount code
New Comment SubscribeSave for later
5 Comments
5th Jun
Fascinating book about the enigmas and weirdness of our world. Superbly written by two brilliant scientists. A must read.
Well found, Thanks + heat
Edited by: "PEC2" 5th Jun
5th Jun
Thanks OP.
5th Jun
I bought this yesterday, cracking deal
5th Jun
Thanks OP. Jim is a fantastic scientist, and a great communicator. Love his 'Life Scientific' show on Radio 4/ podcasts.
6th Jun
cheers batezy, i read the introduction just now on amazon and found the story about the robin fascinating....had to buy