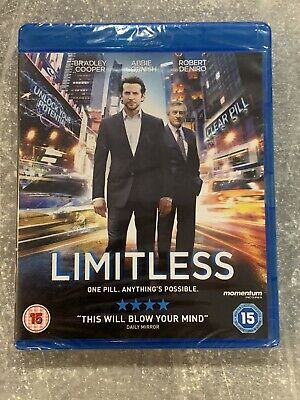 A struggling writer unlocks the full potential of his brain by taking a cutting-edge pharmaceutical, only to find that his newfound abilities have made him a target for some of the most greedy and dangerous men on the planet. Eddie Morra (Bradley Cooper) is an author without a novel. No matter how hard he tries, he just can't summon the inspiration to write a single word. That all changes when an old friend wanders back into Eddie's life, and opens his eyes to a powerful new drug called NZT. The moment Eddie takes NZT, his brain begins functioning at 100 percent, giving him the ability to quickly recall every event in his life down to the smallest detail, learn new
languages in a flash, and harness the untapped power of complex mathematical equations. But when Eddie's supply of NZT runs out, the party is over. Of course, it doesn't take Eddie long to make a mint on Wall Street, and when he does, it draws the attention of Carl Van Loon (Robert De Niro), one of the world's most powerful and prominent businessmen. With Eddie's help, Carl plots to arbitrate a complex corporate merger that will shake the establishment to its very core. Just as the deal is about to be brokered, however, some dangerous characters discover Eddie's secret and come gunning for his dwindling supply of medicine. Now, if Eddie can just endure the debilitating side effects of NZT long enough to run for his life, he may just survive to see another day.
PostTweetShare Share with WhatsApp Share with Messenger
Community Updates
EBay DealsEBay discount code
New Comment SubscribeSave for later
1 Comment
11th Sep
Oos