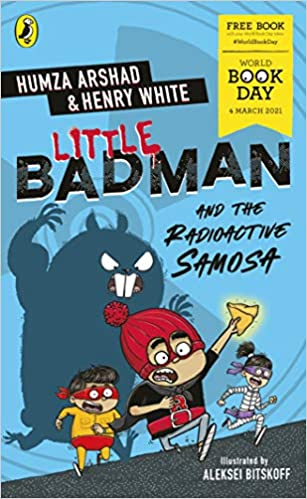 Praise for Little Badman and the Invasion of the Killer Aunties:

Little Badman, aka Humza Khan, has saved the world TWICE.

So it's lucky when Humza and his friends narrowly avoid being hit by rock from outer-space. What does get hit is a box of delicious samosas, which turn . . .

Radioactive! Now the trio have superpowers, which is pretty cool. What's less cool is the giant hamsters on the loose. Looks like a job for Little Badman and his crew.

Review
REVIEWS FOR LITTLE BADMAN AND THE INVASION OF THE KILLER AUNTIES:

'Wildly over the top and satisfying'

― Observer
About the Author
Humza Arshad is the first British YouTuber to have his own scripted comedy series on BBC Three in the mockumentary series Coconut. Since accumulating over ninety million views on his channel Humza has used his influence and comedy for a greater purpose. In 2015, Humza performed at one hundred and twenty schools using comedy to prevent at risk teens of becoming radicalised. He is currently an ambassador for YouTube's Creators For Change campaign.

Henry White is a comedy writer, working in television, online, and most recently in children's fiction. He grew up in West London, began his career in animation, has written and directed adverts for the BBC, worked as a sitcom staff writer, and enjoys penning silly songs for comedy channels. He also has a birthmark shaped like a duck.
PostTweetShare Share with WhatsApp Share with Messenger
Community Updates
New Comment SubscribeSave for later
3 Comments
Post a comment