Community Updates
andywedge
LiveScore will stream 137 Champions League matches to app users in Ireland for freeLiveScore, the global sports media business and one of the world’s leading real-time sports updates and streaming service providers, has today announced a three-year rights deal within Ireland to live-stream 137 matches in the UEFA Champions League (UCL) free-to-air on the LiveScore app. 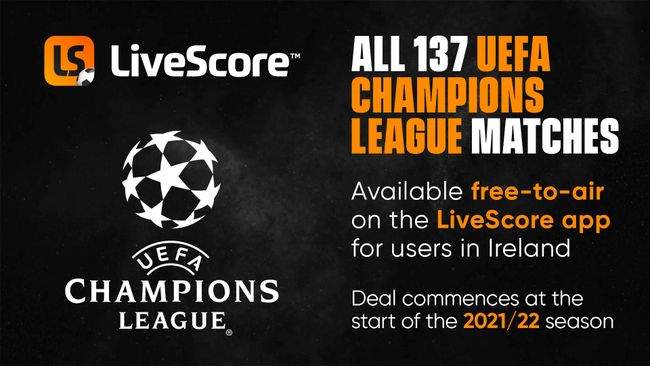 Throughout the term of the three-year deal, commencing at the start of the 2021-22 UCL season, LiveScore will be the exclusive free-to-air broadcaster of 104 UCL fixtures per season in Ireland.

The remaining 33 ties, including the UEFA Champions League final, will also be live-streamed on a non-exclusive basis.

The landmark deal ensures football fans in Ireland will be able to watch every single UCL fixture on a fully free-to-air platform, via the LiveScore app for iOS and Android.

Users will be able to watch the matches on their mobile or tablet devices, with the further option to ‘cast’ the action to their TV screens.

The announcement is the latest boost to Irish football fans, less than a year since LiveScore successfully introduced free-to-air live-streamed football within their app.

By the conclusion of the current 2020-21 campaign, more than 1,250 matches across 15 different leagues and competitions will have been streamed by LiveScore within Ireland this season, including over 300 matches from Italy’s Serie A alone.

Since last October, LiveScore has also simulcast one English Premier League fixture per gameweek free-to-air for app users in Nigeria.

"We look forward to being there for every step of the season, as we bring our users closer to the action with our full offering of live-streamed matches and supporting content."

Guy-Laurent Epstein, Marketing Director at UEFA, said: "UEFA is delighted to welcome LiveScore as the new broadcaster of UEFA Champions League rights in the Republic of Ireland.

"We are excited to see the innovative coverage it will deliver and to bring comprehensive coverage of the best of European club football to Irish fans for free." 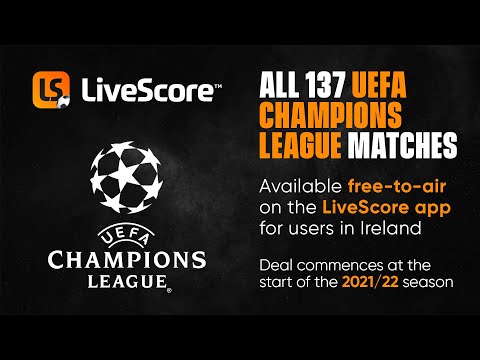