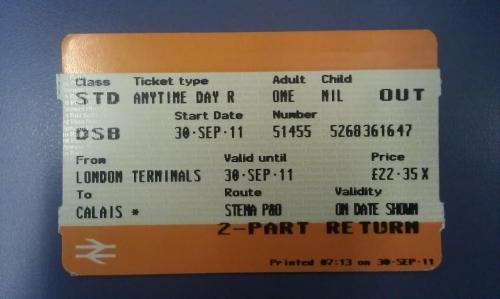 If people dont fancy driving down to calais, you can now get train from any london southern eastern railway stations to dover priory and then get the ferry to calais.(p and o ferry is included in the price). This offer applies to peak times too and railcard also accepted during peak times. This also can be used to get the newer fast trains from st pancras to dover priory which would cut journey times by half. this deal is poorly advertised but it definetely works.
PostTweetShare Share with WhatsApp Share with Messenger
Community Updates
South Eastern Trains Deals
New Comment Subscribe Save for later
64 Comments
24th Nov 2011
Great pic of the ticket have some heat
24th Nov 2011
Struggling to find this on the site, can you direct me to where I can find it? Great deal though
24th Nov 2011
Bit annoying, currently in the South West so probably won't be able to get it. Great deal though, heat added

deleted249798
24th Nov 2011
Not sure why you'd want to go to Calais unless you have a boot to fill with cheap wine. Hot if you want to see the ugliest town in France I suppose you could get smashed and fill a rucksack with a couple of dozen bottles all for less than £50 though!
24th Nov 2011
I had heard about these combined train-ferry tickets, but they aren't available online and I could never find anyone who could explain where/how to get them. Many thanks for the post OP!
24th Nov 2011
Does this work with the Network Southeast card as well or just Disabled?
25th Nov 2011
is there anywhere within walking distance the other side, only ever been when i was very small and can't remember!
25th Nov 2011
oh and a very very silly question but do you need a passport (myne is out of date!) or is a driving licence ok? i know you can now go to Ireland on a driving licence which is why I am asking.
25th Nov 2011
op are you sure it covers the fast train?, as a peak fast train ticket london to anywhere in kent day return is more....i.e. st pancras international to dover priory is £66.40 peak return.
So i cant see this deal covering the fast train
25th Nov 2011
this is extremely good for those doing Europe by train on a budget,

if your doing Eurail pass tickets it doesnt include your journey to the continent (which costs at least £60 to paris/brussels) this is the cheaper. heat added.
25th Nov 2011
also you do need a passport to get to continental europe, however once there, its borderless within the EU area (+ switzerland/leictenstein/vatican/norway etc)
25th Nov 2011
Thanks for flagging this, good deal!
25th Nov 2011
do you need a passport??
25th Nov 2011
Hot deal, there are a few strange fares like this in the 'system'.

What french trains can you get from Calais?

1) The French Police wont let you past their control in Dover, so wasted ticket
2) You will spend a good couple of hours in Calais whilst UKBA make various checks to prove your identity to allow you back into the UK.

As to do you need a passport - it's not such a silly question - years back if my memory serves you didn't need one if it was just a day trip - you could get an day trip card from the post office but the scheme was scrapped years back - you can still travel with britain without one (so say to Northern Ireland) - but despite efforts by Henry V France thankfully isn't part of Britain
25th Nov 2011
'DSB' on the ticket means Disabled.

Are these rates available for able bodied as well, as disabled fares knock about 33% of the standard price

Epic fail on your reply. He has already mention the trains are French.
25th Nov 2011

No, you need your passport.
A driving license is not proof of your nationality.

Turn up with just your driving licence and you won't make it across to France. P&O check to make sure you have a passport along with the French police in Dover.
25th Nov 2011
You can get a free ferry crossing paid for by either "The Calais Wine Store" or Carrefour if you commit to buying a certain amount of wine (check their websites) .

Having said that, a car and passengers including 6 free bottles of wine and BOGOF cooked breakfast on the ferry is only £19 !!!

you might want to read this first...next time...
europa.eu/tra…htm
25th Nov 2011
When you get to Calais, don't hang around in the "Square" where the bars, cafes & restaurants are. That area is the one built specifically for the day trippers and it's pretty grim. Keep on walking for about another mile and you will reach Calais Old Town (Proper Calais) which is clean, tidy and has lots of nice shops, bars etc. There is some stunning architecture there. Unfortunately, most people only stay in the "touristy" area.
25th Nov 2011
gotta go to the Crypt ! ... very funny bar with the obligatory two goths propping up the bar, drinking Riccard
25th Nov 2011
Don't they have a massive shopping centre there? Nice if you want to buy French
25th Nov 2011
hope it works in december
25th Nov 2011
Think OP has made a mistake here as this price isn't for HS1, judging by the price its for the slower train from Charing Cross to Dover Priory. Tickets for HS1 need to state on them "Valid on HS1" so I'm sure the price gets bumped up otherwise this is half the cost of a standard day return and would have loads of people jumping off at Ashford or whatever and saving themselves a bundle on the peak HS1 price (me included!)
25th Nov 2011

Think your right.....tickets valid on HS1 normally say "plus high speed" on them.I live in Strood and use it all the time.

25th Nov 2011
Thanks OP. Had no idea you could do that for so little money, will have to give it a try!
25th Nov 2011
Any idea how much a standard return would be?
To stay there overnight