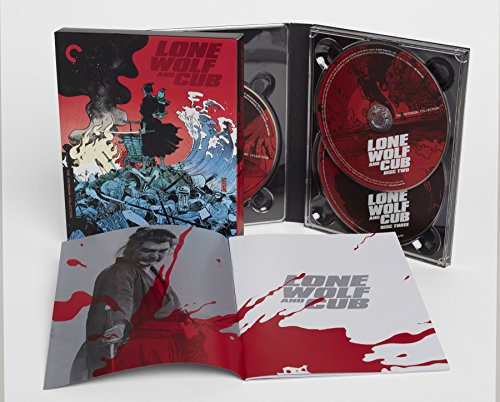 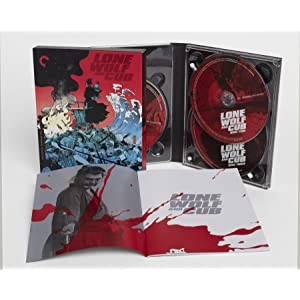 Sword of VengeanceThe inaugural film in the Lone Wolf and Cub series immediately thrust Itto Ogami into the ranks of the all-time great samurai movie icons. In this instalment, the Shadow Yagyu clan plots to solidify its power by taking Ogami’s coveted position of shogun’s executioner for its own. The legendary assassin escapes with his infant son, Daigoro, and swears vengeance.


Baby Cart At The River StyxIn this exploitation-cinema classic, which took the action and graphic violence of the Lone Wolf and Cub series to delirious new heights, Itto Ogami and Daigoro continue their quest for vengeance through meifumado, the spiritual way of “demons and damnation,” pursued constantly by the Shadow Yagyu clan and the shogun’s spies.


Baby Cart to HadesUnfolding in an idyllic countryside that contrasts sharply with the violence that occurs within it, the third Lone Wolf and Cub film follows Itto Ogami and Daigoro as they continue their journey and stumble upon a crime scene involving a group of lowlife swordsmen from the watari-kashi class.

Baby Cart In PerilIn this distinctly lowbrow entry in the Lone Wolf and Cub series, Itto Ogami is hired by the Owari clan to assassinate a tattooed woman who is killing her enemies and cutting off their topknots. Meanwhile, Daigoro is separated from his father when he follows a pair of travelling street performers outside of town.


Baby Cart In The Land Of DemonsBalancing physical action with Buddhist musings on life and death, the most spiritual of the Lone Wolf and Cub films finds Ogami’s combat skills put to the test by five different warrior-messengers.


White Heaven In HellIn the final Lone Wolf and Cub film, star Tomisaburo Wakayama decided to make the sort of wild movie he’d always wanted to: one in which Lone Wolf battles zombies and Daigoro’s baby cart zips improbably across an icy landscape on skis.