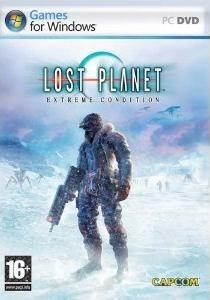 Bit of a oldie but a decent game and for a £1 it kills some time.

Not sure where it's imported from but English is always a language option so should be fine.

Mankind is fighting for survival on EDN III. As well as the extreme conditions on the icy planet, the colonisers have encountered a deadly new alien enemy - the Akrid. Emerging from the frozen wastelands, these heat-seeking monsters seem impervious to human weapons. They quickly devastate the human outposts, the survivors fleeing to the safety of space. The remaining hardened warriors form small groups, snow pirate clans - either determined to find a way of fighting the Akrid scourge, or of plundering the ruins. In one of those groups, Wayne Holden and his father fight a desperate battle against the largest Akrid, the mythical Green Eye. Wayne sees his father die, before he too is encased in the icy blast of Green Eye's attack. Left for dead, Wayne is found nearly frozen by a snow pirate clan. Wayne's memory is gone, all he can remember is facing Green Eye before the ice closed in. One of his father's inventions, locked to his arm, has saved him. Uniquely, it allows Wayne to heal himself using the energy from Akrid bodies. Back from the ice and hungry for revenge, alongside his new companions, Wayne must hunt for Green Eye, fight for survival and save a lost planet on the edge of extinction. The first truly next-generation action game - Lost Planet: Extreme Condition takes the PC to a deadly world of extreme conditions, epic storytelling and all-out combat..

Extreme Conditions: Battle enemies and the environment. Conserve heat from enemy bodies and keep killing, before your temperature drops.
Survival Tools: Defeat giant Akrid using numerous weapons and "Vital Suits" that can upgrade into fast-moving vehicles and heavy tanks.
Band Together: Beyond the 12 epic single-player missions, take the battle for survival online with unique 16-player multi-player action.
Vehicle Based Gameplay: Jump in and out of a variety of heavily armed vehicles not only to help players traverse the treacherous terrain, but eliminate the terrifying enemies that threaten their survival.
Vast Arctic Environments: Snowstorms, arctic winds, towering mountains of ice are all stunningly realized, creating a truly immersive and cinematic event of epic proportions.
PostTweetShare Share with WhatsApp Share with Messenger
Community Updates
The Game Collection DealsThe Game Collection promo code
New Comment SubscribeSave for later
36 Comments
4th Aug 2013
Thanks, have it on the 360 but I've always wanted to try it on PC. Bargain price for a pretty good game. Cost me £3 because of £2 postage to Ireland, but that's still very cheap.

You can just use the licence key when you get it to download it on Steam. Even if you install it using the disc it will activate on Steam and you won't need the disc to play it.
4th Aug 2013
Reviews >

they charge european shipping on each item