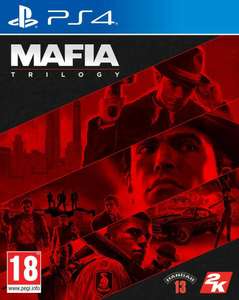 Includes mafia 1,2 and 3, with all dlc. Pretty good price for it if you haven't bought it yet, and the best price I could find. Delivery is 3.95 but click and collect is free if you spend £30 or more (otherwise £3) so you could maybe get something else at the same time.

You could include it with some who got emailed the "30BACK" voucher code for £30 back if you spend £60 or more and it would effectively be up to 50% off depending on how much you spend.
PostTweetShare Share with WhatsApp Share with Messenger
Community Updates
Karis
29th May
Playstation 4 Mafia Trilogy

Mafia: Trilogy Includes main games and all DLC releases. Three Eras of Organised Crime in America Mafia: Definitive Edition - 1930's, Lost Heaven, IL Re-made from the ground up, rise the ranks of the mafia during the Prohibition-era of organised crime in America.

After an inadvertent brush with the mob, cabdriver Tommy Angelo is reluctantly thrust into the world of organised crime. Initially uneasy about falling in with the Salieri family, the rewards become too big to ignore.
8 Comments
Post a comment