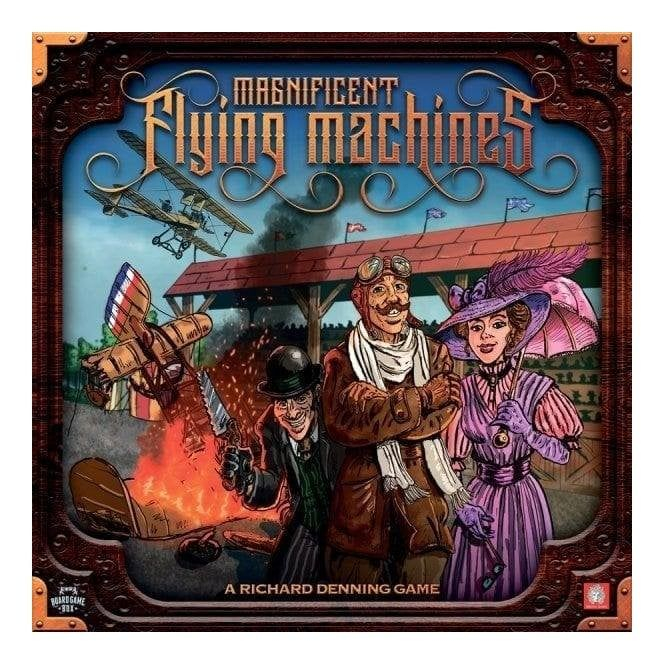 Not played this one and the reviews are a little mixed but I think it looks pretty good and interesting so is one I would give a go if given the chance!

This game takes inspiration from the great air races of circa 1908 to 1913 which took place in the pioneering era of air travel. These air races galvanized interest across the world and encouraged by generous prizes by newspapers and other sponsors attracted international entries. Air travel was risky and most unreliable. Often only a small number of the entrants would make it to the finish line. Will one of your pilots manage to face up to the challenge? But watch out: In this era of gentlemanly behavior and stiff upper lips, there are a few cads and bounders who will cheat to win.

In Magnificent Flying Machines, the player who ends the game with the most victory points wins. These can be earned in various ways including being the first to land successfully on a certain terrain tile, landing on the middle airfield, transporting cargo or passengers, or performing trick maneuvers. Simply being the first to cross the finishing line is unlikely to be enough on its own to secure a victory. The winner will be the player who picks a strategy that best matches the abilities of the pilot and features of the flying machine they are using.

The game is played in a series of rounds. A round begins with the first player taking a turn. Each player takes their turn in order clockwise around the table. During a turn a player has two action phases available. There are three types of action phase to choose from. These are the takeoff phase (which may also include refueling, repairing and scavenging spare parts), the flying phase (which may also include gaining altitude and performing trick maneuvers), and the landing phase (which may also include refueling). In addition, whenever a flying machine lands on a terrain tile any passengers that wish to will disembark, and any cargo intended for that terrain type is unloaded. It may also take on available equipment, cargo and passengers if space is available to do so.

Players progress in the game by passing a series of takeoff, flying and landing tests. To determine the difficulty of a particular test, first look at the number of symbols for that test shown on the terrain tile that the flying machine is on. Simply add the number of symbols shown on the terrain tile to the number of symbols on the relevant weather tile. If a player needs to take a test, first check to see the total number of relevant symbols shown on the flying machine dashboard. This is the number of dice that may be rolled when attempting to obtain a sufficient number of symbols to pass the test. If the player does not roll enough symbols they may then choose to make use of special equipment, use spare parts, or play trick and boost cards to obtain additional symbols in order to pass the test. If a player is unable to obtain a sufficient number of symbols to pass the test then a failure occurs. If the dice rolled include a catastrophic failure symbol, then a catastrophic failure occurs. The effects of such a failure vary depending on the test being taken.
PostTweetShare Share with WhatsApp Share with Messenger
Community Updates
Chaos Cards DealsChaos Cards voucher codes
New Comment Subscribe Save for later
10 Comments
25th Apr
The film this is based on is a good jaunt if you can find it! "Those Magnificent Men and Their Flying Machines"
Edited by: "SteelCity" 25th Apr
25th Apr
Up down flying around....
25th Apr
Hmmm, dunno about this one Jay.... think 26 quid is getting into the territory where there are too many other good games to be going for OKish offerings like this.
25th Apr

I knownwhat you mean but there aren't hundreds of reviews on bgg and only about 30 comments. Its one I'd play for sure
25th Apr

Yeah, that's fair... I think I'm just wary for folks starting out on their board-game journeys who might randomly pick something like this up after seeing it on HUKD because they like the theme or need a gift or whatever - this same money, or very close, gets them Takenoko or Pandemic or Splendor or Flamme Rouge or King of Tokyo or Carcassonne or Dixit or Sagrada which are all just way more likely to provide years of family fun.

It's be different if it was a tenner, at that price then if you get a couple of plays out of it then so be it.... just think there are so many really top notch board games out there now that we have to judge a deal against the others in that price bracket, rather than just the price history of the game itself. Speaking as someone with a few too many ex-The Works 'bargain' games gathering dust I wish I'd just not bothered & used those funds for one or two classics instead.

Sorry, not trying to be down on what you do here... you're always hot on the great game deals.... keep up the good work!
25th Apr
Just watching the game demo on Utube, not played a board game on a board for too many years
25th Apr
My wife bought Imhotep The Duel which arrived last night, cracking little Kosmos game, I lost of course.
I can only ever beat her at 7 wonders duel or Fight for Olympus. Its the taking part and drinking that counts.
25th Apr

I managed to convince my wife to play Terra Mystica with me and she thrashed me! I did beat her at lost Cities to make up for it though
25th Apr

Well tonight she beat me again at Imhotep and then at Fight for Olympus. ‌
25th Apr

Could be worse, my 8 year old regularly beats me at Jaipur
I did win at Keyflower on BGA though just now