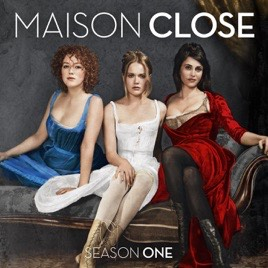 £2.99iTunes Store Deals
7
Get deal*Get deal*
7Get deal*Get deal*
Posted 15th Jun
Gripping Victorian era period drama. Received an alert last week saying that the price had dropped to £4.99, but just went to buy it and found it’s down to £2.99. Really recommend it if you’re into period dramas packed full of drama.

Taking an uncompromising look at the world of brothels and prostitution in late nineteenth century France, Maison Close is a sumptuously produced drama of sex and servitude. Paris, 1871. In Paradis, a luxury brothel, three women try to escape from their troublesome circumstances. Vera is 35 years old, the end of her career as a prostitute drawing nearer. She puts all her hopes on her main client, the only one rich enough to redeem her debt. Hortense is the Madame of Paradis. She must hold on to her girls whilst dealing with an extortionist from the Parisian suburbs. Rose, a much younger woman, arrives in search of her mother, a former prostitute. She is trapped with a pimp and forcibly conscripted into the Paradis.
PostTweetShare Share with WhatsApp Share with Messenger
Community Updates
ITunes Store DealsITunes Store voucher
New Comment SubscribeSave for later
7 Comments
15th Jun
Hmmmm, I’d like to know why people are voting this cold? It went on sale once in 2015 for £8.99 and then spent the next four years stubbornly stuck at £12.99 until last week when it finally got knocked down to £4.99 and now £2.99. Have you guys even watched the series before?
15th Jun
Victorian era, in Paris

Maybe more of a Napoleonic era.

This is also in French if I remember correctly, so subtitles not everyone's cup of tea.
15th Jun

Correct. It’s still in a Victorian style, though. Thought that might help describe it better for those who haven’t seen it.

And yes, it’s subtitled. Subtitles aren’t my cup of tea either, but this is good enough that it’s worth it.

I didn’t realise we voted cold on entertainment that just wasn’t our cup of tea, though? Should I go through all the other iTunes price drops and do the same? Normally I just scroll by if that’s the case and only vote on the ones I actually like based on price. And for fans of the genre, this is an absolute steal at this price
15th Jun

You're taking the voting quite personally. Be calm and go out for a walk.
15th Jun
Bit irritating the second series isn't on UK iTunes (it is on Canadian & US iTunes). Good price though, heat!
15th Jun
This was great - really enjoyed it when it first screened. S2 wasn't quite as good, but I was still disappointed they didn't make any more. Head added
16th Jun
Sounds interesting. Will put it on my too watch list. Thanks.