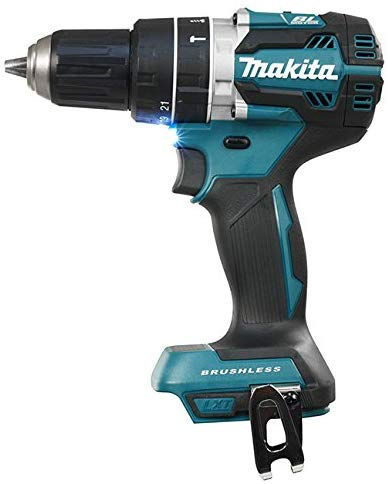 I swapped to the DHP458Z, but wish I hadn't. It is huge and very heavy. I'd recommend handling a few models before buying, as the size and weight vary a lot with Makita drills.
12th Mar

Completely agree if your not use to them or need them for diy work. I had the basic model, but ordered this as I needed more power as I’m an electrician
12th Mar

I have a 484, 458 and 481, all excellent tools, 484 is lightest and has a nice amount of power for most work, however if a bit more umph is needed then I break out the big guns
12th Mar
Good deal. Seems a good thread to ask on. Has anyone got one of the Makita 18v cordless vacuums, thinking of the dcv750. Any thoughts. Cheers Si
12th Mar
Sorry don’t have a clue, are these used for drilling and screw driving?
12th Mar

It's not better, it's an entirely different category.

The DHP484Z is the best general purpose drill - I don't believe a new model is out yet.

The DHP458Z etc. is a heavy duty drill. It weighs a tonne.
And it's not even brushless. The Brushless version is the DHP481Z

A totally different use case.

Most would be best off with a DHP484Z.

They’re all combi drills, so clearly the same category. 2.3kg compared to 1.7kg is not a big difference, but the extra power and weight might be beneficial for some people.
An entirely different category is an sds drill that you’ve suggested , I need a combi drill.
“Most would be best off with a DHP484Z” really depends on what work needs to be done to be honest
13th Mar

I have a DHP484Z, not the DHP481 etc. But from pictures, feedback and comments, you can clearly tell the DHP481 or the brushed earlier models are a lot heavier.

600 extra grams makes a big difference when you're holding something one handed.

The DHP484 is technically in the general purpose category.

And the other drill is in the heavy duty category.

So yes, hyperbole perhaps on my part, the DHP484 and DHP458 are in different sub categories of normal drills.

The DHP484 should really be compared to the DHP482, which it's a lot better than - brushless and better quality and spec I believe.

If you want one drill, or a general purpose drill, the 484 is a much safer bet than one of the heavy duty drills.
Edited by: "Shinoke" 13th Mar
13th Mar

For the same money though, the 458 gets you a proper metal chuck and ~30nm more torque. The 482 has the same plastic chuck as this for half the money, more torque, and brushes that you get to replace after a few of years of light use. Brushless will give you ~x% extra runtime, but otherwise I don't see much benefit for a drill that's nearly twice the price of a 482, or less sturdy (at least in the chuck department) than the 458. "The future is here and it's more expensive and a bit weak"? I'm fully prepared to admit where I'm wrong though far from an expert
13th Mar
If i order this which battery would people recommend? I assume there is a happy balance between weight and capacity? Would a 4A be the best?
13th Mar

Most will find the 458 way too heavy for normal usage - as per the other comments.

Despite both having plastic chucks, and just seeming like a brushed vs brushless, the 482 is meant to be quite a bit poorer than the 484. The 484 is just better made than the 482 apparently, despite still having a plastic chuck. That's from what I've read anyway. I have a 484 but not a 482

I've made the same argument about brushes, but I think brushless is the way to go here.

All I was really doing is supporting this deal, from a comment that wasn't really valid I think.

The 458 is a heavy duty, brushed drill. While this is a general purpose brushless drill, and cheaper. Stating the 458 is better is just objectively wrong I think. It may be better for some. For most I'd say no.
13th Mar

Nope. Get the 5Ah if you can get it for a good price. The 6AH will be too expensive.

3Ah, 4Ah, 5ah and 6Ah all officially weigh the same. I reality each capacity up may be around 5g heavier, imperceptible.

It's only the 2Ah and old 1.5Ah that use half the cells and so are physically smaller units, that weigh about half that of the 3Ah+ batteries.
Edited by: "Shinoke" 13th Mar
13th Mar

How can you say it’s not better? It’s more powerful and can be used for heavy duty work as well as general :s. So clearly more durable than the other one. So for £8 extra, seems to be a good deal. So confused to your thinking here. They are both combi drills!
13th Mar

It weighs 600 grams more, is an old model, and brushed.

A metal chuck would add more weight. There's a trade off between weight, usability and durability.

Come on, the categorisation makes it clear. Heavy Duty generally isn't the best for general purpose. General Purpose unsurprisingly is a better fit for that.

I'm not saying the 458 may not be better for some. But stating in a deal for a 484 that the brushed, older, heavier 458 is better is just objectively wrong. It's different. Quite different.
Not what I'd want.

And see the other users' comments regarding the weight.

There's an argument for having no more power than you need - as power comes at usability cost.

Many even opt for the 10.8V combi drills for that reason. As the 484 isn't exactly light either.

If someone just wants a high quality general purpose drill for the home etc, or even for trade, but general purpose, this 484 is a good buy.
Edited by: "Shinoke" 13th Mar
13th Mar

And I originally got my 484 in a kit, with a charger and 5ah battery, as it was the best deal.

Any kits with a smaller battery weren't really any real saving.

Given the 5ah is the same size and weight as the 3ah and 4ah batteries, it obviously is the better choice if you can get it for a similar or decent price, which was the case for me.

I'm glad I skipped the 3Ah battery deals on Amazon, as I got my 5Ah batteries for almost the same price - perhaps £4 more per battery or so.

If you can get a good deal on a 2Ah then sure, that's a good choice too. Still looking for that. But it won't run anywhere near as long. I like my 5Ah.

Use them in my speaker, vacuum cleaner etc. Wouldn't want the 2Ah for that.

A 2Ah in the drill would be nice, when I don't need a long run time, but I've yet to find a decent deal. They're rare, also no battery indicator still for the 2Ah it seems. Basically a bit neglected.
Edited by: "Shinoke" 13th Mar
13th Mar

So you’d pay £4 extra for a battery with an extra amp, but not £8 extra for a drill that’s got more torque and can be used for more jobs
13th Mar

Well yes, because by every measure the 5Ah is better than a 3Ah or 4Ah.
I have no interest in getting a 3Ah for around £20 when I could get two 5Ah for around £48

But as I've covered at length the 458 is clearly not better than the 484, it's quite different.
And for me not what I want. Too heavy for me. And I want brushless.
So rather than being used for more jobs, it'd be used less, as it'd be an annoyance to use, weighing 600 grams more.

And I've onwed the 484 for years. Why would I now go buy an old brushed heavy duty combi drill? And what, sell my 484?

I considered getting a 481 to complement it, but may get a twin volt SDS instead.

Your comments really make no sense, this one especially.
13th Mar

‌ clearly stated in my first comment “if anyone wants more power” or did you not get to read that bit because you couldn’t wait to pounce on the “better” comment. So for you yes your drill might be “better”, but for anyone who works on a building site or wants more power like I suggested, yours would not be better.
How can you have a go at me for using the term better when your now trying to tell people which battery’s are “better”. you clearly have no experience in construction
13th Mar

Well I missed the "if anyone wants more power" qualifier there as it's at the end after a comma and price.

It read as if you were simply stating it's better.

The 5Ah is objectively better than the 3Ah or 4Ah as it is the same size and weight! So the only factor is price. And in my case I got the 5Ah in a kit as it was the best price! And got much better deals on the 5Ah

And see this. And similar comments.
13th Mar

Finish reading comments before you jump to conclusions, I await the apology
13th Mar

Finish reading comments before you jump to conclusions, I await the apology

I missed that comment but you're clearly pushing the 458 and stating it's better, so you can continue waiting for that if you want lol
13th Mar

Keyboard warrior and ignorant bet your great fun at a party
13th Mar
I didn't want to start an internet drill fight, just looking at the numbers it didn't really add up. I drill more masonry than anything so heavy duty sounds fine to me, and I get that brushed will die out like petrol cars but on spec sheets alone it feels like we're not quite there yet; they're more expensive for less torque, and we can solve the runtime issue of brushed drills by throwing more £19 3ah batteries at the charger.

The 484 would have to outlast two 482s to be worth the money for me, but I can't see that happening, and they're both going to have the same 3yr warranty; two 482s for the same money would get you 6 years of guaranteed holes, and 10nm more torque.
14th Mar

Agreed... I have the 458 brushed, yes it's heavier but the extra torque really helps with jobs that don't quite warrant an SDS drill or you want something that can screw and drill easily. People really do get sucked into the 'emporors new clothes' with going crazy about brushless... they're getting sucked into the manufacturer's hype too easily....brushed tools still have their place and the brushes do not wear out often, if ever in the typical life of a DIYers drill. Brushes can be changed easily, the complex drive circuitry for brushless cannot and that could be their achillies heal, time will tell.
Edited by: "spannerzone" 14th Mar