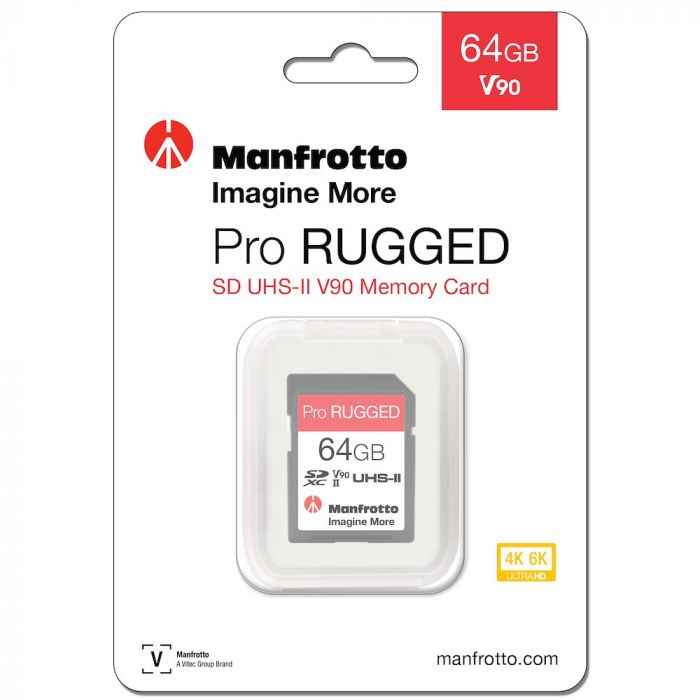 This is a specialist card with fast write speed of 250MB/sec, most 64gb cards around £30 top out at 90MB/sec if you are lucky, for use in for high spec camera or video recorders (no point using this in a wii switch) for its spec this is a very low price per GB. Example use is high FPS cameras or those with big files, like Sony A9, Sony A7, Sony A7R, Panasonic GH5, Nikon D850, Fuji, XT-2.
This card is about runs at 280MB read, 250MB Write. The write is important as UHS-I cards max out at 90MB, so this allows you to clear the buffer 3 times quicker.

Tougher than tough: Pro Rugged memory cards are designed to be the strongest memory cards on the market. The SD cards utilize a solid moulded design where the ‘brains’ of the card are completely sealed inside and protected, making them 3 times stronger than a regular SD card and able to withstand over 20kg of impact!

Waterproof & Dustproof: SD Pro Rugged cards utilize a sealed & moulded design for protection against water damage and foreign debris, and can be fully submerged for up to 72 hours!

Built for Extreme Temperatures: Whether you’re shooting in desert heat, the sub zero arctic, or you leave your memory card in a hot car, you can shoot with the assurance that Manfrotto Pro Rugged Memory Cards are built to withstand these temperature variations. SD cards are rated for temperature ranges from -25°C to 85°C.
PostTweetShare Share with WhatsApp Share with Messenger
Community Updates
Manfrotto Shop DealsManfrotto Shop Discount Codes
New Comment Subscribe Save for later
6 Comments
13th Jan
Despite all this negative cold votes I've just took the plunge. Certainly can't see a better deal around.
Needed one for a forthcoming camera I've been looking into although not 100% decided I'm going to buy it! However won't work without it......
13th Jan

I expected the cold votes, its a great price for what it is, but expensive as sd cards go. This isn't the type of thing you stick in the wii, it's a specialist card as so few devices have UHS-II card slots.

It's why I listed competing products but I posted anyway as I thought it would help a few people.
13th Jan
128gb also available hotukdeals.com/dea…076
14th Jan
Heat
14th Jan