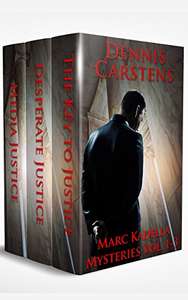 Description
Minneapolis criminal attorney Marc Kadella knows the best and the worst of the law—from corrupt police officers to crooked judges, with a handful of unforgettable clients in between. Highlighting the beginning of his career, this collection features Marc’s involvement with an accused serial killer, the family of an influential (and irresistible) socialite, and the young mother of a missing toddler caught up in a media circus. Chock-full of grit and street savvy, this action-packed legal thriller series is a Grisham fan’s dream. (And we dare you not to fall in love with Marc’s best friend, badass private investigator Maddy Rivers). We guarantee you’ll tear right through these first 3 novels, now bundled in a page-turning box set.

BOOK ONE – THE KEY TO JUSTICE
Financially embarrassed, getting a divorce, living in a shabby apartment, and distinctly short of clients, Marc Kadella’s beginning to question why he ever went into the law when a friend brings him the case all Minneapolis is watching--defending an accused serial killer. If he wins, it could turn his life around— if he blows it, he better go into sales.

It's a classic David-and Goliath setup, and the author’s got some pretty fancy twists in store as Kadella unravels a complicated plot to set his client up, and Maddy battles demons that just keep coming at her. Fans of John Grisham, Richard North Patterson, and of course the most beloved lawyer sleuth of all time, Erle Stanley Gardner’s Perry Mason, will gobble up this one and go back for the rest of the series.

BOOK TWO – DESPERATE JUSTICE
After winning the case of a lifetime, Minneapolis criminal defense lawyer Marc Kadella welcomes the new energy his career is receiving. Another lawyer asks him to represent the co-defendant in a murder trial resulting from a petty crime that spiraled out of control—the somewhat “accidental” murder of the nephew of Vivian Corwin, grande dame of the influential Corwin family. Disarmingly charming and still downright sexy at sixty-eight, there’s more to Vivian than meets the eye. You just gotta love a society doyenne who can toss off, “… if I wasn’t a lady, right about now I would say: f--- you.”

Marc has no illusions about why he’s being brought into the case, or what will happen. What he doesn’t know is that he’s gotten on the wrong side of a crooked judge; he just knows the guy hates him and will do everything he can to make life miserable for Marc and his client.

BOOK THREE – MEDIA JUSTICE
An adorable—and photogenic—two-year-old girl is kidnapped, and, when her remains are found, her twenty-two-year-old widowed mother Brittany is arrested for her murder. But before she can even be charged, she’s been tried and convicted by the media., at the center of which is Melinda Pace, a cynical, mostly-functioning alcoholic Minneapolis television personality with a “legal news” show called The Court Reporter. Not even in the alternative universe of television news could she be described as a reporter, since she makes no attempt at or pretense of presenting the truth, or even the facts. She does do a great job of producing through-the-roof ratings and whipping the public into a frenzy—with tragic consequences.