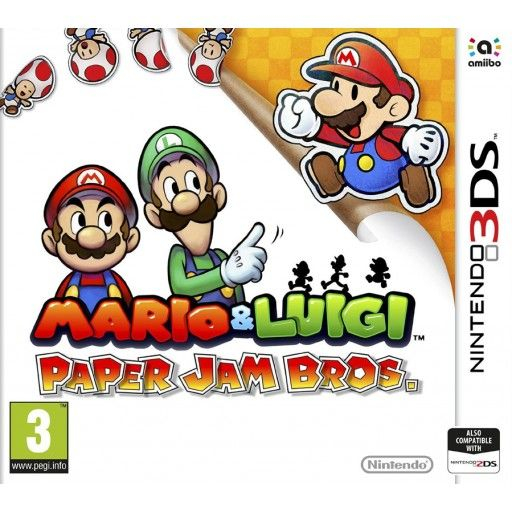 Mario & Luigi: Paper Jam Bros. for Nintendo 3DS family systems is the latest game in the Mario & Luigi RPG series, in which you control both Mario and Luigi. In this instalment, you have a third playable character: Paper Mario!

Characters from the Paper Mario universe, including Paper Mario, Princess Peach, Bowser and Toad, jump out of a book and into the world of Mario & Luigi, resulting in hilarious and dangerous hijinks! Take down Bowser's army of dastardly villains, solve puzzles and embark on quests as a brand new trio of heroes.

Paper Mario has unique abilities, such as turning into a paper aeroplane, slipping through cracks or creating copies of himself. Use all three characters together to successfully pull off trio moves and trio attacks, and continue onwards on your adventure! When faced with giant papercrafts from Bowser's army, show off the moves of your own giant papercraft by charging it up with the power of dance!


PostTweetShare Share with WhatsApp Share with Messenger
Community Updates
The Game Collection DealsThe Game Collection promo code
If you click through or buy, retailers may pay hotukdeals some money, but this never affects which deals get posted. Find more info in our FAQs and About Us page.
New Comment Subscribe Save for later
1 Comment
24th Nov 2019
Ordered for sons 2dl xl for Xmas. Good price, is over £13 in argos