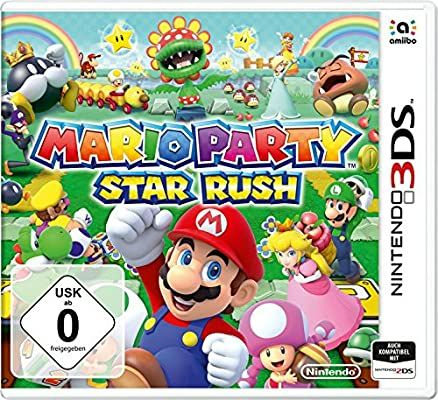 £16.06Amazon Germany Deals
8
Get dealGet deal
8Get dealGet deal
Posted 22nd Dec 2019
the free “Party Guest”, and you'll have the best “Mario Party” in the past ten years.
Rating: 8/10 - "Successful multiplayer fun for young and old" (Planet3DS.de, 10/05/16)
"Mario Party: Star Rush is the best Mario party game ever." (Eurogamer.de, 09/27/16)
description
Mario party fun for everyone at the same time! Waiting was yesterday - now everyone is moving at the same time!

Together with Mario, Peach and Co to victory!
The innovative new "Mario Party" title for Nintendo 3DS sets a completely new direction for the popular series. The focus in the new part was on making the gameplay faster and better adapted for mobile devices. The main mode "Toad Scramble" uses a new, open card style that gives up to four players unprecedented freedom of movement, instead of just letting them move linearly across the field as usual. The wait for your own move is also over since all participants can now roll the dice at the same time. There are different colored Toad figures to choose from, which other well-known figures from the "Super Mario" series can join in the course of the game.

Lots of modes and fresh mini-games:
• Coin races: a mini-game race without throws
• Back and forth: reach the goal in front of your opponent
• Toad tour: roll the dice at the same time, pull together! Find all sorts of companions and fire up the bosses!
• Balloon hunt: Enough coins with you? Then grab the stars!
• Climbing tower: Climbing fun for solo players up to 500 fields high!
• Party Guest Edition: Available free of charge in the Nintendo eShop. Fun for up to 4 players with just one card!
• Compatible with amiibo figures

Features & details
Nintendo Mario Party Star Rush
PostTweetShare Share with WhatsApp Share with Messenger
Community Updates
Amazon Germany DealsAmazon Germany voucher codes
If you click through or buy, retailers may pay hotukdeals some money, but this never affects which deals get posted. Find more info in our FAQs and About Us page.
New Comment Subscribe Save for later
8 Comments
22nd Dec 2019
Only £14 in Argos
22nd Dec 2019

Ooops I'm a newbie I'll expire it thanks!

But hardly any stock at argos you should unexpire this.
22nd Dec 2019

But hardly any stock at argos you should unexpire this.

Nah leave it I'm only a newbie only learning the ropes trying to help out on the site!
22nd Dec 2019

I got called it before and a child, but nevermind you can't put any sense were there wasn't any in the first place can you!
22nd Dec 2019
Only 13.99 on amazon UK!