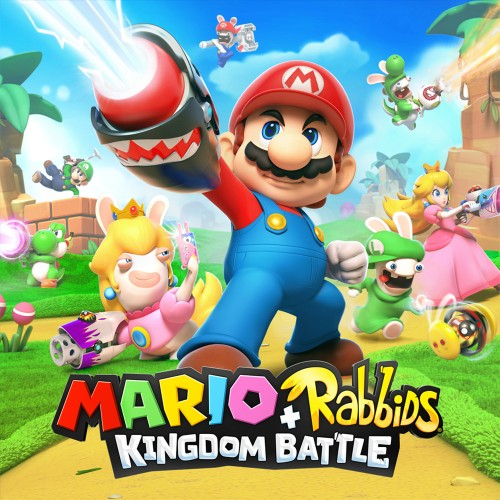 Gold and DLC on sale too.
Two worlds collide in Mario + Rabbids® Kingdom Battle, an over-the-top strategy adventure only on Nintendo Switch. Form the most unlikely team of heroes to restore order to the Mushroom Kingdom, and battle through four twisted worlds filled with dynamic turn-based combat, challenging puzzles and unpredictable enemies.

Mushroom mayhemThis is the story of an unexpected encounter between Mario and the irreverent Rabbids. The Mushroom Kingdom has been torn apart by a mysterious vortex, transporting the Rabbids into the once-peaceful area, splintering this beloved land. 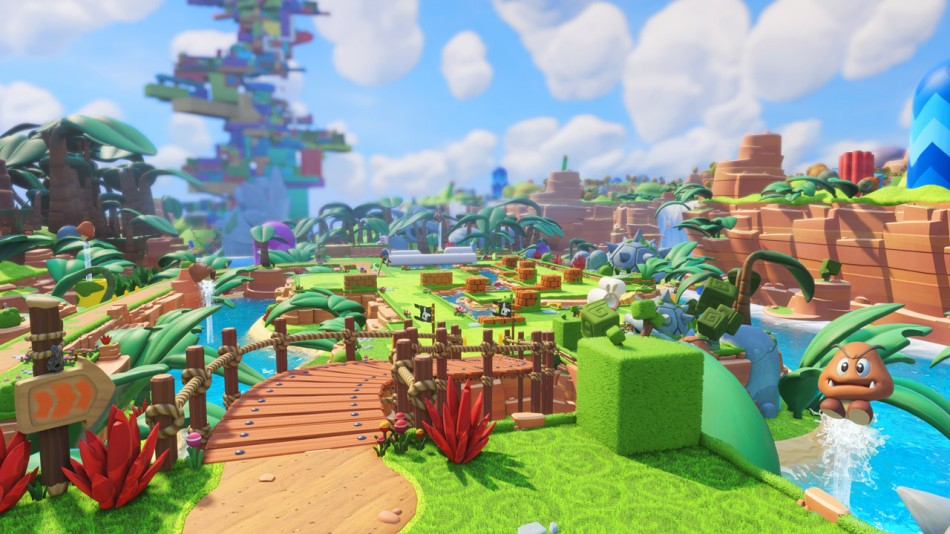 To bring order back to the mixed-up Mushroom Kingdom, Mario, Luigi, Princess Peach, and Yoshi must team up with four Rabbids heroes, each with their own unique personalities! Journey through warped worlds filled with coins to collect and puzzles of all shapes and sizes to solve.

Join these eight heroes in a side-splitting adventure, and discover delightful nods to classic Mario games along the way – as well as plenty of mischievous Rabbids! 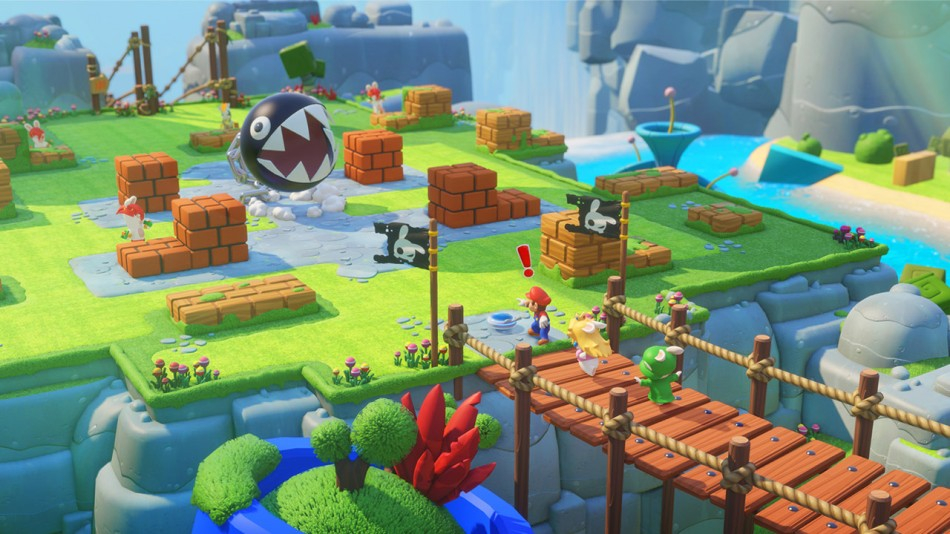 Crazy combatWield never-before-seen weaponry and engage in turn-based combat with a variety of unusual foes and outrageous bosses. Take turns manoeuvring your heroes around the battlefield, and trade blows with the enemy using ranged and melee attacks. With hundreds of wacky weapons at your disposal, carefully consider how to equip your charismatic heroes before you do battle! 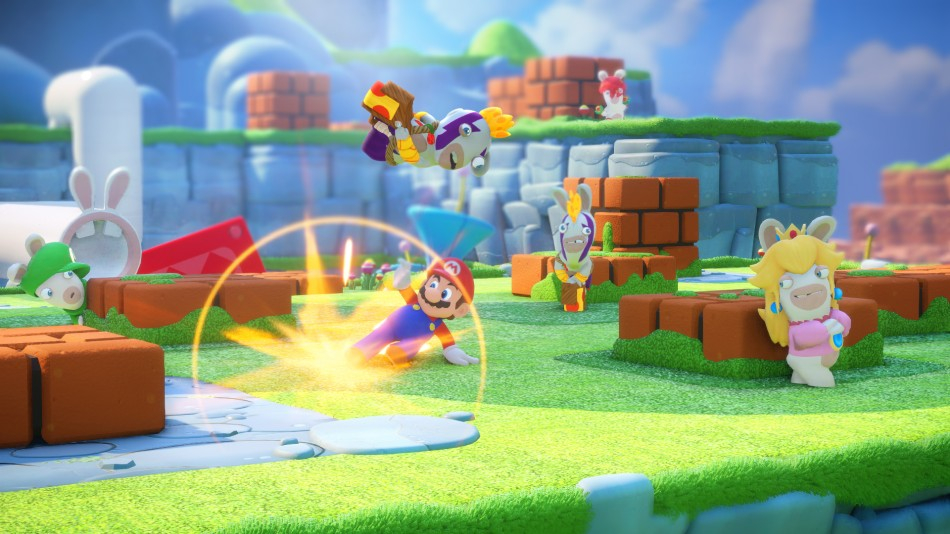 Take cover!Make clever use of the environment to outwit your opponents to gain a tactical edge! Hide behind cover to avoid ranged enemy attacks, jump through Rabbid-shaped pipes to quickly move around the battlefield, and unleash your heroes' unique abilities as you face off against the enemy. 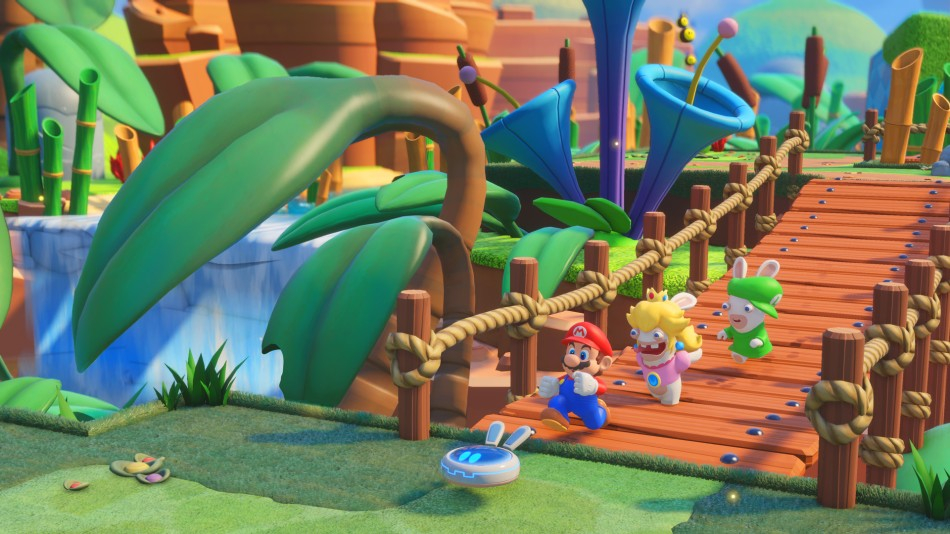 Squad goalsEach hero has their own special moves, stats and techniques that can change the tide of battle and shape the way you play. Take advantage of Mario’s high offensive power to overcome stronger opponents, keep your squad fighting fit with Rabbid Peach’s healing techniques, and outmanoeuvre onrushing enemies with Luigi’s advanced mobility. How you assemble your squad is totally up to you! 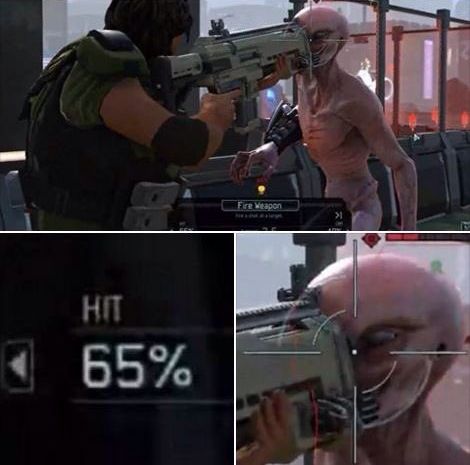 
what does that mean?
2nd Apr
Thats a shout!
2nd Apr

Offers in-game purchaseswhat does that mean?

The gold edition and other things like a special gun
When you buy online games you fan scroll down in the description and there are add ons
Edited by: "shadey191" 2nd Apr
2nd Apr
Worth getting this or wait for gold edition to go on sale?
2nd Apr
I’ll finally bite
2nd Apr
It's great,
2nd Apr
Is this like xcom?
2nd Apr
Great game. Looks like one the highlights of the big Spring eShop sale at the moment.
2nd Apr
Great deal! Purchased and heat added 😁
2nd Apr

Kind of.
2nd Apr
Gold edition only 14.99!!!
2nd Apr
Spicy hot
2nd Apr
Worth buying the Gold Edition for the Donkey Kong DLC alone. The whole thing is fantastic.
2nd Apr
Great game if you like X-COM and the like but obviously light hearted.
2nd Apr
Amazing price, even cheaper via Russia but even at this price it's fabulous. I'm not overly keen on the game but at this price it's worth the money!
2nd Apr
Daft question time....what kind of game is this? New to Nintendo...watched the trailer but it's still unclear!
2nd Apr
Excellent, nearly got this for £22 earlier
2nd Apr
Extremely underrated game.
2nd Apr

It’s a turn-based strategy game. It’s a lot like XCOM, as said above. It’s really well done and not intimidating to new gamers at all - it will get trickier as you go on, but it eases you in gradually and it’s just a lovely game. Worth looking at YouTube videos if you want a better idea of how it feels/plays, as some people don’t like the format (it’s not an action game that tests reflexes at all) but if you’re up for that, it’s arguably one of the best games on the Switch.
2nd Apr
Amazing game amazing price, no brainer.
2nd Apr
I can't find the gold edition for £15 😵
2nd Apr

Click on where it shows the Gold Edition for GBP 61.99 and it shows the discounted price of £14.99 at checkout
2nd Apr

ec.nintendo.com/bun…401
2nd Apr
is the game challenging? not expecting xcom challenge but yknow with nintendo games these days
2nd Apr

It's got a good learning curve and gets hard nearer the end, at least I thought so.
2nd Apr

I think it's supposed to be average difficulty. Approachable and not as tough as Xcom.
2nd Apr
Your link takes me straight to checkout pirate - it's 14.99 but no idea what it is I'm paying for!

I literally cannot find this game on the Nintendo store via their search or Google search! It's starting to vex me now!
2nd Apr
How much is the dlc out of interest?
2nd Apr

Fair enough. Follow the link on the Get Deal tab, then at the top of the main game page is a tab for Gold Edition, hit that then follow the link at the bottom which says proceed to purchase ( ignore the £60 price, its £14.99 at checkout )
Edited by: "pirate1" 2nd Apr
2nd Apr

How much is the dlc out of interest?

Donkey Kong £5.99, Season Pass £7.99
2nd Apr
Awesome, nearly bought this the other day for my new switch, glad I held off 😁😁
2nd Apr
Lowest price they've ever had it? Surprised to see a good deal in the eShop sale
2nd Apr
the links down for me.