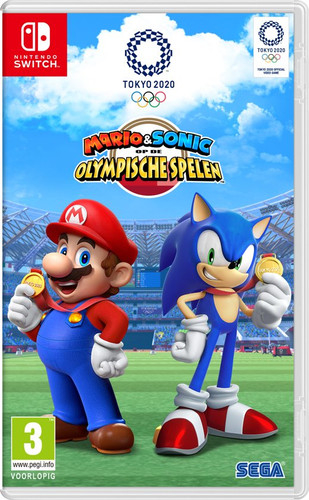 Go for Gold! Join Mario, Sonic and friends for their greatest adventure yet in Mario & Sonic at the Olympic Games Tokyo 2020 for Nintendo Switch. Train for Tokyo 2020 solo or compete against friends in brand new events – Skateboarding, Karate, Surfing and Sport Climbing - as well as a large selection of favourite sports and classic 2D games.

- Let the Games Begin: Whether on the track, in the pool, on the water or in the ring, there’s an event for you in Mario & Sonic at the Olympics Games Tokyo 2020. Take on new Olympic sports, or enjoy established favourites using a variety of play styles - including immersive motion controls where you can use the Joy-Con to imitate actions like throwing a javelin or taking aim with a bow.

- Multiplayer: Grab up to three of your fellow athletes on the same sofa and battle for a gold medal in local multiplayer or connect and compete against three other players with local wireless play. Head online and go for that Olympic record against up to seven other competitors in a variety of different events.

- An All-Star Cast: Fly the flag with a star-studded cast of characters from the Super Mario and Sonic universes like Yoshi, Amy Rose, Luigi, Dr. Eggman and many more. With characters excelling in particular events, pick your favourite competitor and aim for the top.

- A Blast from the Past: Travel to the Olympic Games Tokyo 1964 with Story Mode. After Mario, Sonic, Bowser and Dr. Eggman are pulled into a magical game system, they find themselves competing in a nostalgic 2D version of the previous Tokyo Olympic Games. As Mario and Sonic, explore ‘60s era Tokyo and compete in truly old-school versions of familiar Olympic events like the 100m and the Long Jump, as you search for a way back home. Meanwhile in the present, travel between different Tokyo 2020 venues as Luigi, gathering friends, completing minigames and taking part in modern-day events to help rescue Mario, Sonic and co.
PostTweetShare Share with WhatsApp Share with Messenger
Community Updates
The Game Collection DealsThe Game Collection promo code
If you click through or buy, retailers may pay hotukdeals some money, but this never affects which deals get posted. Find more info in our FAQs and About Us page.
New Comment Subscribe Save for later
10 Comments
18th Dec 2019
Anyone know what the online is like with this?
18th Dec 2019
Good price Frank, heat added
18th Dec 2019

Anyone know what the online is like with this?

Its really dead
I could not get a match with anyone. Its only good if you have online friends to play with
18th Dec 2019

Is there a HUKD switch thread for people to add eachother and play online? For any games not just this one, I think that could be a cool idea!
18th Dec 2019

Tragic seeing as it isn't even 2020 yet
18th Dec 2019
I got the demo and only some of the games, mostly the "2d classic" are really fun. Im not sure it would last more then a few days unless you are hardcore Olympic fans.

The 3d games are mostly simulation with Mario and sonic characters. TBH its just not all that much fun b/c Olympic sports are often against clocks or points on your own rather than against people.

Surfing for example is just naff, its like skateboarding but even more limited!

Badminton is truly limited and the version that was in Mario party on the WiiU was more fun!

I grabbed this when tesco were doing 2 for £60 offer. I only played for about 30 mins before it was listed on sphock...

I agree that most games were lame, particularly the motion controls. I know most people hate on mario party, but I find that way more fun then this.. shame really because the games were fun on 3ds.
18th Dec 2019
I just wish this was a pure button mashing Olympics game. I remember games on the ps1 where you had to button mash for a good 5 mins staight for something like a 800m race. Infact, I just checked. "International track and field", I damn loved that game.
18th Dec 2019

The 2d parts of the game are like this, its a bit like Warioware for the GC.