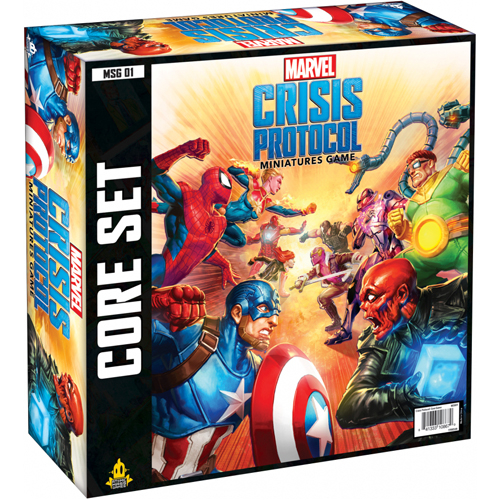 Table top model skirmish game . Figures are unpainted but this normally goes for around £80 , currently £61.79 +delivery

Marvel: Crisis Protocol is a tabletop hobby miniatures game set in the Marvel Universe. Players assemble, paint, and collect an ever expanding line of highly detailed plastic miniatures representing iconic Marvel characters. Players choose characters from their collections to form their own Marvel inspired dream team and then pit their chosen forces against each other on an interactive tabletop where the very terrain itself can be thrown, crashed into, and destroyed during the super powered showdown.

The Universe is Beset by Crisis. Who Will Rise Up and Answer the Call?

Welcome, true believer, to Marvel: Crisis Protocol, a two-player miniatures game of climactic combat! Assemble your team from across the Marvel Universe and lead your superpowered forces against your friends’ in battles of cataclysmic proportions.

Unleash the power of the Cosmic Cube with Red Skull and rend the very fabric of reality around your foes. Lead from the front and leap into the line of fire with Captain America. Harness the might of a binary star with Captain Marvel and send cards, trucks, and even buildings careening into your enemies.

As powerful as each character is, none of them can win the day alone. It’s up to you to lead them: each game of Marvel: Crisis Protocol will require bold tactics and cunning strategy to achieve ultimate victory…At least until the next crisis strikes!

Strictly only two players? Anybody played this?

Most Skirmish games are , however I can't see any reason why you can't split them into small squads and take it in turns (you can do this with stuff like 40 K , Warmachine etc )